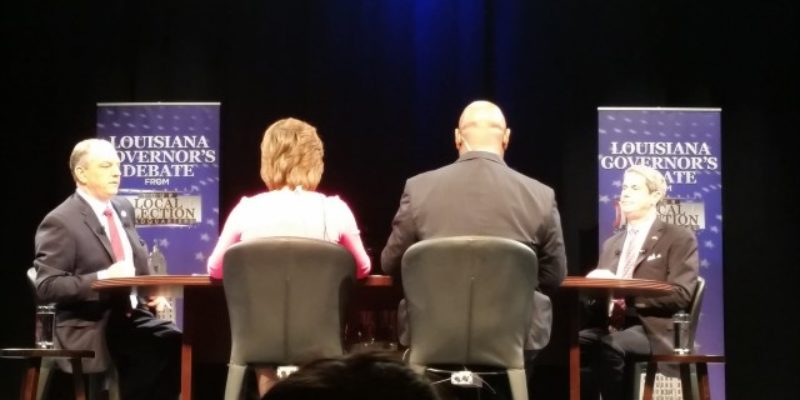 Here’s a clip of a thoroughly, completely dishonest statement in which John Bel Edwards gets called out for his terrible economic voting record, attempts a dodge answer and gets called on that by debate moderator Fred Hickman…

And a few minutes later…

In the clip at the top he styles ending tax breaks, which it seems he’d have you believe were bought by lobbyists on behalf of rent-seeking businesses (and some few of them certainly were) but most of which were passed in an effort to stop the bleeding of jobs and capital to Texas for its superior economic climate, as reductions in giveaways rather than tax increases – which is telling, as it illuminates the core assumption of the socialist Democrat that the money belongs to the government and not the people who created the wealth in the first place.

What’s not in this clip is Vitter’s response, which is that contra Edwards’ statement about being one of the 90 “F” scores by LABI this year the 29 score he’s got is a LIFETIME score. And after Vitter calls him out on his record Edwards shamefully came back with “I give 100 percent to my wife,” and then venomously suggests Vitter do the same.

So he gets his head handed to him on the substance of his record and his response is to hurl personal insults. It would be more dignified just to admit he was beaten rather than to show that he’s possessed of a shortage in character to match his deficient legislative record.

But in any case, Edwards’ declaration that he’s never voted to increase taxes on business didn’t go unnoticed by LABI – who put out an official statement begging to differ…

Tonight was the final debate between Rep. John Bel Edwards and Sen. David Vitter. It was likely the final time voters will have the opportunity to hear each of the candidates discuss the substantive issues before they head to the polls this Saturday.

Most notable from tonight’s debate was the fact the Edwards made several comments that directly contradict his legislative voting record. For instance, tonight he said that he intends to oppose tax increases, cut spending, look for efficiencies throughout government and undedicate many parts of the budget to make it easier to effectively use existing dollars.

While this would be a responsible approach, Rep. Edwards’ voting record clearly illustrates that he actually has a different political philosophy. In fact, last year he supported over $2 billion in higher taxes, including substantial increases on employer taxes for critical items such as electricity, inventory, debt, and research.

“Tonight, Rep. Edwards’ rhetoric on tax increases did not match his career voting record,” said Brian Landry, vice president of LABI Political Action. “He claimed he did not support tax increases last session, despite the fact he clearly helped raise them by at least $700 million. He also claimed he supports spending cuts and efficiencies, despite the fact he has vocally opposed them in the Legislature.”

Last session’s tax increases are only a few of the many votes that contribute to Representative Edwards’ career LABI voting record of 29 percent. This career voting record is lower than the career voting record of Mary Landrieu, Mitch Landrieu and Kathleen Blanco. This fact, along with his 25 percent voting record for NFIB, are substantive and statistical reasons that employers across the state are concerned that he will liberally govern in the same way that he has legislated.

The voting records of both Rep. John Bel Edwards and Sen. David Vitter are attached to illustrate the clear distinction in the political philosophies of both candidates. 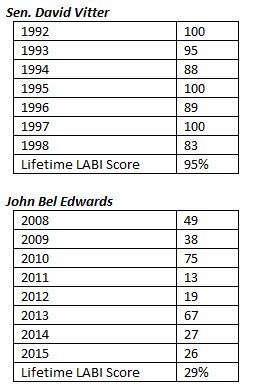