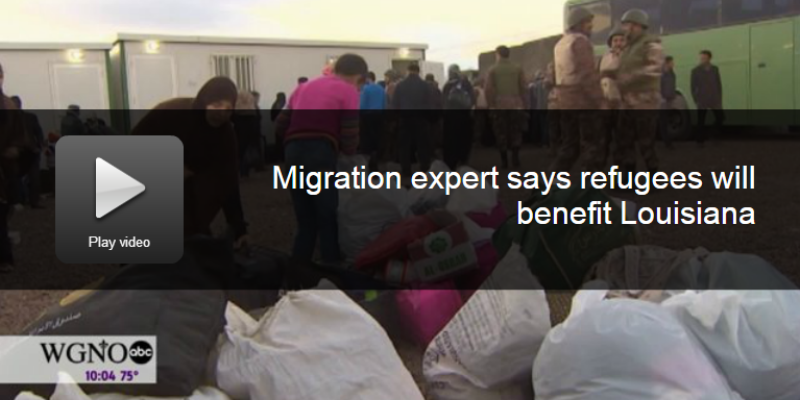 In large part, the Louisiana media has ignored the facts about what mass migration can do to a town, city, state and country.

At the Hayride, we’ve reported on how mass migration trends and how they have transformed states like Minnesota and how that same scenario could occur anywhere else in the country.

However, WGNO-New Orleans released a report a couple days where they did discuss what mass migration does to an area. Naturally, mass migration was glorified because it will somehow “replenish the American dream.”

Of course, it’s never explained how, but nonetheless, it sounds good. Here’s the video of the WGNO report:

The expert cited in the entire WGNO report says “Refugees bring with them incredible resilience, and courage and determination.”

Of course, the expert conveniently fails to mention what has occurred in states like Minnesota where more than 30,000 refugees have mass migrated to the state. Welfare is now the norm in Minneapolis, the state faces a high terror alert and a number of Muslim refugees have been converted to jihad while in Minnesota and subsequently left the US to fight for the Islamic State in Somalia.

Also, no mention of what has occurred in Belgium (where open borders has been their immigration policy) in the wake of Muslim mass migration has created an international terrorist “breeding ground” in the country.

Then there is the argument that it’s only 14 refugees in the state so far. But, again, if the media knew anything about refugee, migration and immigration trends, they would know that the facts conclude that once a handful are resettled in an area, hundreds and thousands more follow soon after.

Additionally, the report ignores that nearly 70 men and women living in the country, a handful of which who came into the country as refugees, have already been charged with ISIS-related terror plots.

And the report ignores the news that several dozen suspected terrorists may have accidentally been allowed into the country by the State Department, posing as refugees.

None of that is mentioned though. It’s all just rainbows and sunshines.