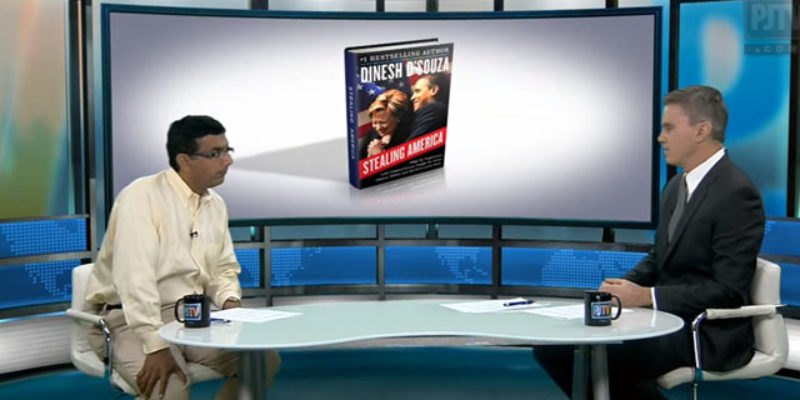 If you’re a conservative, Dinesh D’Souza has written a book – Stealing America: What My Experience with Criminal Gangs Taught Me about Obama, Hillary, and the Democratic Party – which ought to be required reading.

It’s a classic case of making lemonade out of the lemons he received from an Obama administration very unhappy with the two movies he made skewering the president for the lies and anti-Americanism he concealed from the public. D’Souza committed a crime, of sorts, in giving $20,000 to a college friend named Wendy Long who was running for the U.S. Senate in New York through a pair of friends who agreed to be straw donors; usually, violations of campaign finance laws like that are referred to the Federal Election Commission for civil action and a fine is paid.

But not in this case. D’Souza was prosecuted to the full extent of the law for his dumb mistake (if he’d started a PAC to benefit his friend he could have given unlimited amounts of money to the effort to get her elected, but because he convinced a couple of friends to write her campaign a check and paid them back he’s Public Enemy Number One), so much so that it was actually a victory for him when he didn’t get a prison sentence but rather had to spend eight months’ worth of nights in a San Diego halfway house with gangsters and psychopaths.

As he says in the interview, the interaction with the criminal class for those eight months opened D’Souza up to an insight some conservatives have recognized (we here in Louisiana have special understanding of this) but most haven’t; namely, that all of the rhetoric about Social Justice and Equality and Compassion on the Left merely masks something a lot simpler. That would be ordinary theft, but on a lot larger scale.

The Obama and Clinton political machines have figured out how to dress up old-fashioned Tammany Hall or Chicago political scams in high-sounding pseudo-Marxist academic language in order to make people feel better about having their money stolen. They’re not actually trying to make the world better and they don’t actually believe any of their rhetoric. They just see a great opportunity in using politics to attain the wealth of those who’ve actually created it and to control their fellow man, and the social justice schemes they ride on are nothing more than the opening pitch of a scam.

That’s one reason why leftists are so anxious to dress their perspective up in unearned moral superiority; without that, you can merely boil their policy prescriptions down to the brazen attempts at theft that they are.

D’Souza does a great job in the book of diagnosing all this and presenting it in a fashion regular people can understand. His discoveries aren’t particularly novel, and yet few on the Right have been as pointed in calling a spade a spade.

We’re long past the point where conservatives go along with the lie that the Left are well-meaning people who just don’t know what they’re doing. Fifty years ago that might have been true. It isn’t any longer.