Scott is absolutely right in that David Vitter is making all the right enemies. However, he left another important enemy off, Mitch Landrieu.

Mitch is hosting a fundraiser for St. John Bel this Saturday in James Carville’s New Orleans home. The minimum contribution being asked is $1,000. 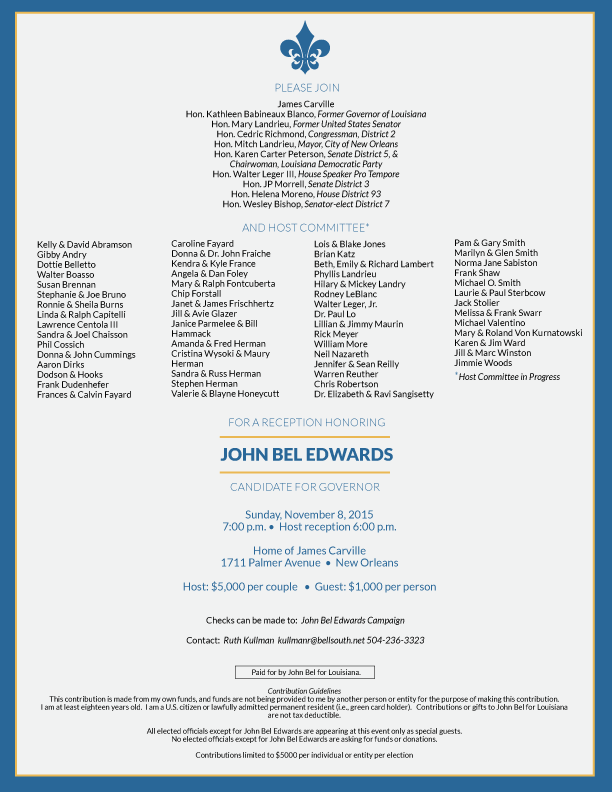 Vitter couldn’t ask for a better enemy than Mitch Landrieu. You might know Landrieu as the mayor who is trying to knock down Confederate monuments across the city ISIS style while presiding over a city that is turning into a slum. Crime is out of control and streets are becoming craters, but Mitch is still obsessed over his damn monuments. Vitter will stop the Landrieu agenda and try and save New Orleans from itself.

The reason why the old guard such as the Landrieus, Lawrence Chehardy. the Louisiana Sheriff’s Association, and the rest of the courthouse crowd is opposing Vitter is they’re worried he might break their rice bowls and limit their ability to hand out special favors to those politically connected. The trial lawyers hate Vitter because they know that he’s going to push tort reform. The teacher’s unions know that Vitter will continue and expand school choice in the state.

Vitter takes a different approach to the old guard than Bobby Jindal did. Jindal played “Let’s Make a Deal” with the trial lawyers and the courthouse crowd. He took their money and endorsements and in return, he really didn’t rock the boat all that much. The ambulance chasers, “legacy lawsuit” shysters, courthouse crowd, and the unions know that David Vitter doesn’t make deals with them. He will simply steamroll them in order to make the necessary reforms to bring Louisiana into the 21st century.

The choice in this runoff couldn’t be more clear. St. John Bel is the defender of Louisiana’s entrenched special interests while David Vitter is the aggressive reformer Louisiana needs.

Interested in more news from Louisiana? We've got you covered! See More Louisiana News
Previous Article The Media’s Knickers Are In A Twist
Next Article HUDSON: State Representative District 66 and District 69 Meet and Greet: TUESDAY Nov, 3