One of the key substantive moments in Tuesday’s presidential debate between Marco Rubio and Ted Cruz came when the former accused the latter of weakening America’s national security by helping the USA Freedom Act to pass. Central in the USA Freedom Act is a shutting-down of the NSA’s bulk collection of phone and internet record metadata, essentially on a general warrant.

Cruz, and others in the Senate like Mike Lee and Rand Paul, rightly saw that program as an unconstitutional abuse of government power. General warrants are one of the governmental abuses the Revolutionary War was fought over, and the 4th Amendment was brought into the Constitution precisely to guard against them.

Rubio took the position that Cruz is weak on national security for wanting the former NSA program altered, though, and the Establishment Republican media has dutifully followed his line of reasoning. Cruz responded by noting that, contra Rubio, the NSA’s metadata collection program going away was not the proximate cause of San Bernardino – political correctness was.

Namely, nobody looked at Tashfeen Malik’s Facebook, on which there was ample evidence she was a jihadist, before letting her into the country. Apparently it would be “inappropriate” and disrespectful of privacy rights of prospective immigrants to look at public social media postings. Or even, apparently, to Google their names.

And then there are the revelations by whistleblowers noting that the Obama administration shut down investigations which would have smoked out Malik and her husband Seyd Farook before they perpetrated the San Bernardino massacre, because those investigations centered around jihadist mosques here in America. Any serious effort to combat terrorism here in this country must start with identifying mosques preaching jihad and sharia, which unfortunately is the majority of them, and continue with a robust effort to shut them down and deport all those who attend who are not American citizens. Free speech doesn’t extend to plotting murder against your fellow man, and particularly when you’re not even a citizen.

Donald Trump has caught a firestorm of opprobrium from the elite people over his demands to stop Muslim immigration and to go after the families of terrorists. But if one interprets Trump’s tough talk and certainly impractical policy suggestions as the expression of a general sentiment, which they are, Trump is on to something.

Namely, that the American people see the Bush-era formulation that Islam is a religion of peace, that Islamic terrorism isn’t actually Islamic, that since most Muslims aren’t jihadists we ought not inconvenience them while we fight the terrorists, and that because we don’t want to discriminate in our security procedures we should treat everyone the same and not “profile” anyone, and they recognize it as a pile of crap. They also recognize as a pile of crap the Obama formulation of Muslims as the good guys and white America as the cause of all the world’s problems.

Of course most Muslims aren’t jihadists. That doesn’t matter. Most Japanese weren’t rabid militarist imperialists. Most Germans weren’t Nazis. The ones who were made themselves the drivers of those societies, and the rest had to pay the consequences when the rest of the world had to mobilize to defeat their ideology.

Radical Islam – which is a euphemism in its own right, because the jihadists are practicing a very mainstream interpretation of that religion and fully living out the teachings of its political doctrine – is an ideology no less threatening and no less fervent among its adherents than Nazism and Japanese imperialism. And it has driven a 1,400-year civilizational conflict with Western society that predates America and will go on until Islam either reforms (which would be great, but without altering the Qu’ran itself it’s hard to see how that will happen), dominates the world, or is wiped out the way Nazism or Japanese imperialism was.

That’s an ugly truth. It’s something none of us want to hear. It makes for a bleak future full of war and cruelty. It requires a different way of living, one way or another. Either we go gently into multiculturalism and accomodation in the way of the Swedes and Germans and French, which would greatly erode our freedom and our security, or we begin exclusion of certain people who might be individually blameless but by association no longer find welcome among us.

The eight years of the Bush administration, and its “neocon” foreign and security policies, sought to bury the ugly truth and offer democracy and freedom to the Muslim world. It offered lots of money for nation-building in Iraq and Afghanistan, hoping to show Muslims that there was a better way forward than either military dictatorship or Islamic theocracy. And in Iraq and Afghanistan, those democrats proceeded to write constitutions based on Sharia law and govern in ways more corrupt and inefficient than the enemy regimes they replaced. That Obama came along to destroy every iota of progress Bush had made through inaction and negligence does not change the fact that the “neocon” policy is fundamentally wrongheaded.

Muslims don’t want democracy and freedom. Democracy and freedom are Western concepts, transferable though they might be to Far Eastern societies. They are not concepts which can easily take root in Muslim societies. Not without generations of occupation and nation-building throughout those societies that the American people aren’t willing to commit to.

It’s not that Rubio doesn’t mean well, he does. He understands America must lead on the international stage, and he offers an interventionist foreign policy as a manifestation of that leadership. Cruz is a departure from that. Rather than attempting to find “good” Islamists in Syria, Cruz wants to kill ISIS jihadists in their hundreds of thousands and the devil take Damascus – because Cruz knows that there is no solution on the horizon in Syria.

And Cruz isn’t interested in treating all Americans as potential terrorists. That means no metadata without a warrant and it means no sexual assault by unionized, low-skilled government employees at the airport. It means getting serious about the actual threat and acting to keep America safe from it.

What Cruz offers is a smarter, more focused approach to the mere sentiment Trump offers, and the sentiment is correct. Cruz is offering to move the Republican Party past a “neocon” foreign policy, in the same way (as David Goldman correctly notes) Ronald Reagan moved it beyond the policy of “detente” crafted by Henry Kissinger and toward a winning of the Cold War.

And that’s a better direction. It’s more than 14 years since 9/11 and we are no further toward defeating militant Islam than when we started. Changing from the Obama administration, which has ignored jihadism and pretended it was conservatives and gun owners who represent our chief national security threat, back to Bush-era policies is neither politically feasible nor a workable strategy.

– Because it was a national security debate, you moron.

– Congratulations to Paul Ryan, who has made himself as hated as John Boehner in considerably less time than it took Boehner to become a villain. The Obamnibus bill Ryan shoehorned through the House is all of the same garbage Boehner was guilty of pushing on the American people, and more – it even includes funds for the miserable Paris climate change agreement. Not to mention quadrupling the number of work permits for unskilled laborers at a time when fewer Americans are in the work force than ever.

Remember when Ryan was seen as a conservative stalwart? Those days seem so long ago now.

For the residents of Riviera Beach, it has been a long time coming.

Mary Brabham has been a resident of Riviera Beach for years.  She says the change is welcome.

“It’s time to let the past be the past.  We are moving forward and do things not for one, but for all.”

According to Riviera Beach Mayor Thomas Masters, Old Dixie Highway served as a reminder that this city  was once heavily segregated.

Changing signage is about closing the chapter on racism and beginning a renewed sense of pride.

“We are stepping up to a new day, a new era, and replacing old Dixie with Barack Obama who represents change.”

All that road needs is a mosque and a Planned Parenthood clinic and it will be all set.

Little too much truth sometimes. 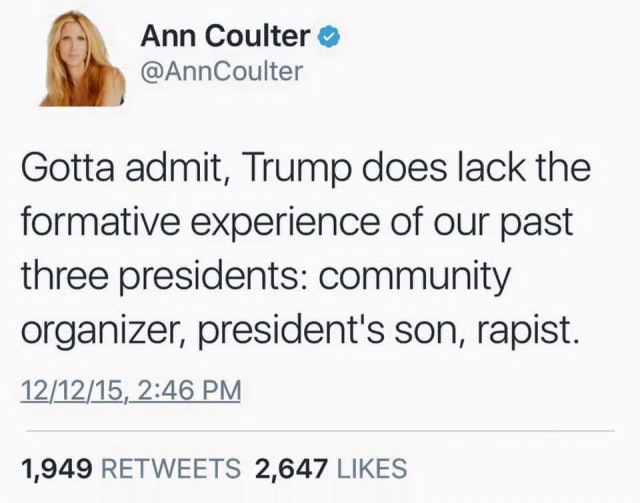 That doesn’t have to be an endorsement of Trump. I see it as a recognition of diminished quality of American leadership since Reagan.

– If we took a poll of the American people asking whether they support or oppose illegal aliens getting welfare benefits, what do you think the numbers would look like?

– Troy Hebert isn’t really thinking of running for the Senate, is he?

– And finally, I have this…