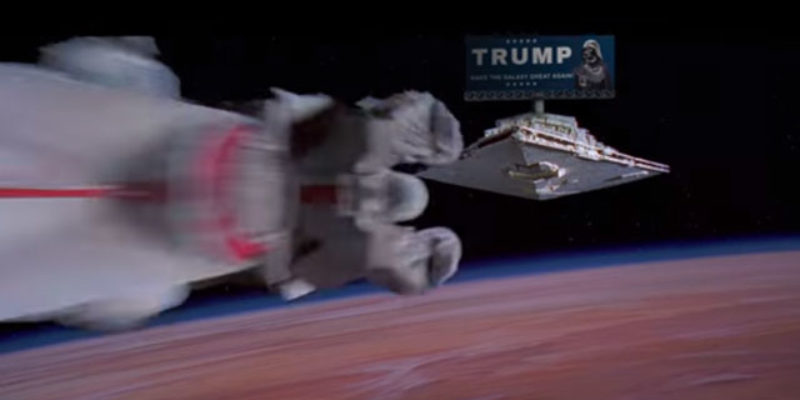 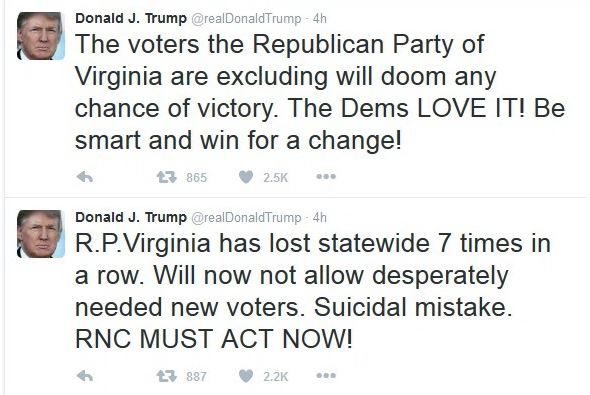 What Trump is talking about is this…

Virginia voters interested in casting a ballot in the Republican presidential primary will have to show their loyalty to the GOP.

In the commonwealth voters do not register by a political party, but in order to take part in the March 1 Republican presidential primary voters will have to sign an oath saying they are a Republican before casting a ballot.

On Wednesday, the Virginia State Board of Elections gave the requirement the go-ahead.

“It’s not a specific pledge, and, in fact, the way that we designed this statement was to be as inclusive as possible,” said Republican Party of Virginia Executive Director John Findlay.

They say under Virginia law the parties can include such requirement, but questions remain about how this will be carried out.

“As an election officer, this will be a nightmare to implement,” said Olga Hernandez, of the League of Women Voters.

One state official talked about how burdensome the situation was.

“If they’re given something that’s between them and the ballot, they get angry,” said Lawrence Haake, of the Chesterfield County General Registrar.

Another ongoing discussion will be who has access to the signatures after the primary. For now, officials say they think the forms will be sealed. However the Republican Party wants access to them.

“To be straightforward, yeah, we do want to data mine it, if at all possible,” said Findlay.

The Virginia Democratic Party will not be following suit.

Trump sees this as an attempt to keep his voters out of the primary, and to some extent he’s correct. If there was a majority of Republican base voters supporting Trump it’s unlikely the Virginia GOP would be attempting to carve a closed primary, or something close to it. Trump’s voters aren’t typically Republican base voters; there are some of those, but the usual Trump voter profile is that of the “radical middle;” people who aren’t particularly sophisticated voters ideologically speaking and who don’t align with any discernible part of a normal Republican coalition – they’re not national security voters, they’re not evangelicals or the “religious right,” they’re not particularly small-government/free-market voters.

And they’re largely either Democrats or independents. They’re the kind of voters the GOP says it wants to include in its “big tent,” and yet when they show interest in voting for a Republican presidential candidate here’s the party trying to get rid of them.

Or at least that’s how Trump is framing it.

On the other hand, it’s entirely understandable that the state GOP in Virginia is trying to force an oath of fealty on its primary voters.

First, since there is no particular Democrat primary to speak of – everybody knows Hillary Clinton will be the nominee – Democrat voters could well decide to cross over to the Republican side to make mischief in the GOP primary. And should that happen it’s entirely likely Trump, who appears to do worse against Clinton than any of the party’s other contenders, would be the beneficiary.

Second, from a Louisiana perspective it makes sense to capture the identities of as many people who voted in a Republican primary as possible. One of the big downsides of an open primary in this state is political party membership is entirely unnecessary – you can vote in whatever race you want and it makes no difference how you’re registered. That means from a fundraising standpoint or a campaign organization standpoint you have a lot less data to work from. The Louisiana electorate is typically made up of somewhere between 55 and 60 percent Republican voters, but only 28 percent of it is actual registered Republicans. So if you’re the state GOP, how do you target things like direct mail pieces for fundraising or messaging to individual voters? It’s not that you can’t, but it’s considerably more difficult when you get a list of registered Republicans from the Secretary of State’s office and it only includes half the voters interested in your message.

So if the Virginia GOP wants to collect a bunch of pledges from people voting in its presidential primary and then data-mine that to improve the effectiveness of its message, that is a perfectly defensible idea.

Of course, Trump isn’t very interested in that. He’s interested in Trump. And deservedly or not, the Virginia GOP is going to bear his wrath if he thinks it’s in his interest to let it loose on them.

Interested in more national news? We've got you covered! See More National News
Previous Article KLAVAN AND WHITTLE: Why Humility Is Important To Truth-Telling
Next Article Here’s Tom Benson’s Sick Burn Of The Times-Picayune After They Called On Him To Sell The Saints