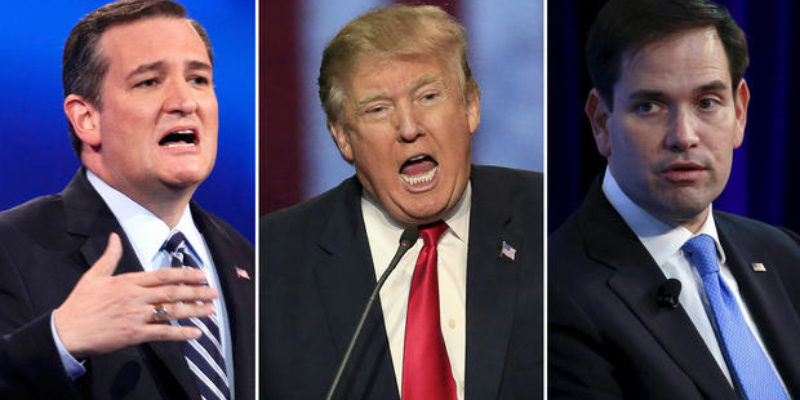 As someone involved in politics who writes about the subject on a weekly basis, I have many strong opinions about many matters.

Yet in the latter part of 2015 and the start of 2016, I remained undecided about my choice for president.

Four, rather five years ago, I got behind Rick Santorum in August when he was at 2%.

Part of that was frustration with a field that lacked conservative conviction. Sure then-Texas governor Rick Perry had jumped in like a cannonball and then-Congresswoman Michele Bachmann had just won the Ames Iowa straw poll.

And while I did not know Santorum was going to take off, I did know that Perry and Bachmann were going to implode. The former Pennsylvania US Senator had won the Keystone State twice, once the same year George W. Bush lost it for president and had been an unapologetic conservative on issues from abortion to foreign policy. I was at peace with the decision and was happy others warmed up to Santorum, who came within a right hook in Michigan of winning the GOP nomination.

However Santorum and his fellow unlikely Iowa caucus winner from 2008, ex-Arkansas governor Mike Huckabee, are going nowhere and are not viable. In fact their presence in the race undermines the very agenda they advocate. But that’s for another day.

My candidate going into the 2016 election cycle was Wisconsin governor Scott Walker; a fearless conservative who took on some of the worst elements of the Left. In fact I settled on Walker for president before he had survived the 2012 recall. His political meltdown, of which I am reminded on a weekly basis through emailed solicitations for donations to pay off his wrecked candidacy, made me politically homeless.

With my 2008 and 2012 choices exiled to the children’s table in the debates, the basement in the polls, and the poorhouse in fundraising, I needed to look at the field.

Truth be told, I don’t have a problem with Chris Christie. Yes, I know the conservative running for president today is also the moderate who ran for office in New Jersey some time ago. But the Big Boy fights. And I wish he had run in 2012 and even cast a ballot for him at a CPAC straw poll in 2009 or 2010. My issue with Christie is that I don’t think Bridgegate is that far behind him. He has not defused that political bomb but rather has merely drowned out the noise of its ticking.

Ohio Governor John Kasich intrigued me. Once. I remembered his exploration of the 2000 presidential race and was open to his candidacy. Unfortunately, the Kasich running today is not the same Kasich who ran then. He’s come off at times as an ornery moderate who has obnoxiously dressed his “cut the baby in half” policies in religious garb. At no time did the Lord command us to obligate state governments to embrace unfunded future welfare mandates.

Jeb! was never a part of the conversation.   Ever.

And despite the media build up I never found Rand Paul all that interesting. In fact, I saw the effort and investment he put into winning CPAC straw polls as an omen of a badly run campaign.

Dr. Ben Carson is a most agreeable man who reminded me too much of Bachmann. His people were sincere and passionate about their candidate but what the French call elan is not enough.

Carly Fiorina was a welcome addition to the conversation but simply was not going to be picked.

That left CRT- Cruz Rubio and Trump. And since Walker folded his tent, I have bounced between the three.

Donald Trump is a political force unlike any candidate since Huey Long. That Trump has never run for public office makes him that much more remarkable. I went from doubting how long he would remain in the race (I am going to owe a CPA $20 in two weeks when he makes it to Iowa, something I did not foresee) to doubting whether he could win the presidency.   The latter concern remain.

Trump does not fare well in head-to-head polls against Hillary Clinton. Furthermore, there is the probability that even the Teflon Donald is going to finally let loose a flippant comment he won’t be able to walk away from. Trump’s lack of a conservative track record to back up the conservative rhetoric he now espouses has been a problem for many on the right and has led some to question his credibility as a contender and whether he is not a plant. I think the latter is a stretch, though no more than his declaration that Ted Cruz is not “precleared” to become president.

Florida US Senator Marco Rubio seems to be the man most Republicans want to see nominated. He’s our Obama, in both the positive connotation and the negative.   I want to back Marco. I just don’t trust Marco. I’ve heard bad things about his political operation from insiders who don’t have a horse but do have money. And then there’s his immigration position(s): past, present, and possibly future. Marco strikes me as a man who seems earnest but also politically impressionable. The moderates are going to melt away from the race within two weeks and if Marco is still standing, they’re going to swoop in and dangle the money he needs to compete with Trump and Cruz. They’re going to say he can keep his conservative positions though they are going to want moderates staffing him, as a candidate and as a president. Rubio could be a Trojan Horse by a Republican establishment that has already been rejected before the first vote was cast.

Thus leaving me with Ted Cruz. I would have been with the conservative Texan earlier, though I have worries about him- though not ideological. Cruz needs to figure out a way to become more likable and less caricaturized by the belligerent media. Cruz is a brilliant man, a trusted conservative, and a champion debater. I will go into greater detail about the senator in a forthcoming column, but after evaluating the choices, this once undecided conservative has decided that Ted Cruz represents the best hope conservatives have at not just winning but at making such a victory worthwhile.