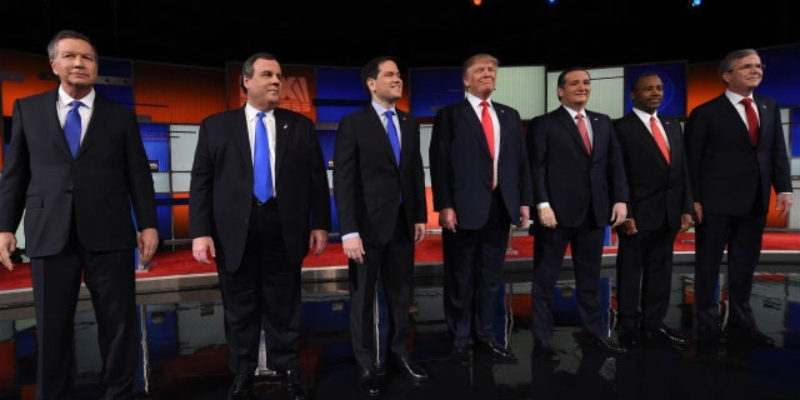 Messaging sharpened and elbows were thrown in North Charleston as the Republican candidates for president entered the homestretch of the pre-caucus preliminaries.

The candidates also sought to more overtly lay claim to the largest share of the GOP’s various constituencies in order to avoid blowouts in some states while gaining an edge in others.

John Kasich: The Ohio governor had a good night, coming off as polished and abandoning the angry moderate crank routine that defined his previous outings. Kasich has good reason to show a sunnier disposition: his campaign has picked up momentum in the key state of New Hampshire.

Chris Christie: The Jersey Boy was without his favorite punching bag as Kentucky US Senator Rand Paul had been knocked off the dais due to flagging poll numbers, though he found a new target in Rubio.   Christie’s aggressive demeanor has given him a unique identity: a fighting centrist.

Jeb Bush: The former Florida governor and presidential scion/sibling did not have a bad night tactically speaking, comfortably fielding questions and not really tripping up on anything.   However the desperation was apparent when Bush went after the “backbenchers” who have led him in many of the polls.  Perhaps someone should inform Bush that he cannot insult his way into 5th place.

Donald Trump: Birther Nation Part 2- North of the Border! The billionaire had eloquently blasted Texas US Senator Ted Cruz for his out of context unflattering “New York values” comment but blew it by diving into his second “birther” rager in consecutive presidential elections. While he’s leveled his tone, Trump missed a chance to claim his first decisive debate win by personally pursuing questions about Cruz’s eligibility to be president.  Trump’s most substantive moment came on the matter of North Korea, arguing that rather than being an annoyance to Beijing, the hermit kingdom was in fact doing their bidding through their nuclear saber rattling.

Ted Cruz: The TEA Party favorite’s debate style is improving, coming off less rehearsed and more natural.   His second tussle with Rubio once again was a highlight.  His deflection of million dollar campaign loan disclosure was effective, reminding Republican voters that he is the candidate the New York Times and the Left hates the most.  Still needs to work on coming off as likable.

Ben Carson: The good doctor looked childish when he complained about the lack of time he was afforded…in the opening segment and before Trump had even been asked a question. The neurosurgeon didn’t have a bad night though he didn’t do anything to turn his evaporating campaign around.

Former HP CEO Carly Fiorina shined bright in the three-way dance with former Arkansas governor Mike Huckabee and ex-US Senator Rick Santorum. However as the large field of candidates crystalizes,  Fiorina is in the same position as a football team that is a longshot to earn a wild card spot in the playoffs: she’s going to have to run the tables and need a lot of help through the collapse of Jeb, Christie, Rubio, and Kasich.  Otherwise, that oft-touted Carly-Fiorina debate isn’t going to happen.

The cash strapped candidacies of past Iowa Caucus winners Huckabee and Santorum have essentially run their course.   After years of working the Pizza Barns and evangelical churches, they are both known quantities though neither has been able to recapture the magic that propelled them out of the shadows and into the grills of the men who went on to win the GOP presidential nomination.  How they did in the “children’s table” debate at this juncture is irrelevant; that they’ve been unable to do much in the polls is relevant.  If they were interested in seeing their issues championed, they’d pull out and rally their voters behind the contender in the best position to make it to the next round rather than splitting the base.

There’s a saying that any publicity is good publicity. Apparently the libertarian politician never heard of it, choosing to sulk in his tent than utilize time and exposure in the first round debate to revive his surprisingly crumbling candidacy. Rand is doing to his father’s brand what Jeb is doing to his dad’s.  They should both deliver an early Father’s Day gift by bailing before the voters pull the plug for them.


Interested in more national news? We've got you covered! See More National News
Previous Article If All John Bel Edwards Is Offering Is A Tax Increase, The Legislature Ought To Decline A Special Session
Next Article New Orleans Suspending Applications For Streetlight Banners After These Pro-Life Signs Upset City Officials