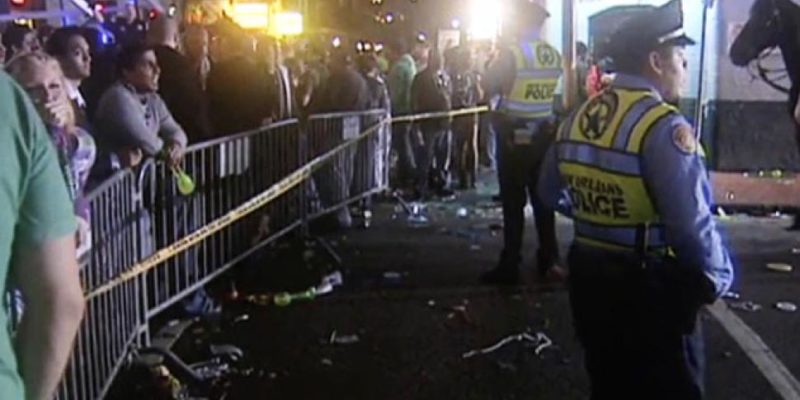 With the tragic death of Josh Woodruff, a New Orleans tourist and Harvard graduate who was brutally dragged six miles in a French Quarter hit-and-run on New Year’s Eve night, the question has arisen yet again about the safety of tourists in the city.

Internet meme’s and social media has become consumed by the idea that tourists will likely arrive in New Orleans for the food, music and culture and never leave because they will be killed.

Far too often is that the case.

However, back in July of 2015, Mayor Mitch Landrieu claimed that tourists in New Orleans are as safe in the city as they would be in any other city they were visiting.

“Is your city safe? It depends. If you are a tourist coming into town … and you’re coming to my city and you want to come enjoy it, you’re as safe in my city as any place in the world,” Landrieu said at the time.

The idea that tourists are safe in New Orleans, though, just simply is not the case. Most recently, the entire state is mourning the death of Josh Woodruff, the most recent out-of-towner-death in the city. Other cases debunk Landrieu’s claim too, unfortunately.

Back in 2003, Kanako Ohyama, a Japanese tourist in New Orleans, was found dead in the woods near the Mississippi River in the Algiers area. Apparently, the tourist was strangled to death by a belt and her body was found partially nude, though investigators were unable to determine whether or not she had been sexually assaulted.

About a year ago, Brian Hanrahan, an Irish policeman who was in New Orleans on vacation, was shot during an armed robbery which occurred just 15 blocks away from the French Quarter. Hanrahan was robbed and shot by a man who was pretending to help him find a bar to get a drink at.

In October of last year, 64 year-old San Diego native Doug David who was visiting New Orleans was nearly beaten to death in the Marigny neighborhood.

At the time, David’s family said the New Orleans Police Department (NOPD) was hardly even interested in the matter. At first, when contacted by the San Diego Times, NOPD said they had no record of law enforcement even being dispatched to the scene of the beating.

Also, the notorious Halloween Bourbon St. shooting in the French Quarter left two individuals dead and 14 others injured, including a tourist in the city from France.

Back in 2013, a Bourbon St. shooting left four individuals wounded. At the time, the media interviewed a slew of tourists who had witnessed the shooting and said that the incident had deterred them from the French Quarter.

“It’s my first Mardi Gras, and I’m having a good time, but I won’t be going to Bourbon street,” said one Georgia tourist at the time.

Mardi Gras in New Orleans is a world-wide phenomenon which brings in sometimes over a million tourists to the city. And since 2004, there have been eight shootings along parade routes in the city where tourists normally are located.

Violent crime has gotten so out-of-control in the city since Hurricane Katrina, that law enforcement actually tells tourists to walk in large groups, as this can reduce the likelihood of an armed robbery, shooting or other violent crime.

Interested in more news from Louisiana? We've got you covered! See More Louisiana News
Previous Article Looks Like Monday Will Be More Than Just Inauguration Day In Louisiana, It’ll Be Ted Cruz Day As Well
Next Article Mitch Landrieu’s Massive Tax Hike Would Be Used To Pay Off The City’s Decades-Long Refusal To Pay Nola Firefighters