Here’s something fun for your weekend.

Earlier this week, the leftist blogger Lamar White wrote a vituperative screed assailing state representative Neil Abramson (D-New Orleans) for the sin of offering himself as a candidate for House Speaker. Abramson was nominated on the first ballot and received two votes, then he withdrew from the race and supported Taylor Barras, the Republican who ultimately won.

“State Rep. Neil Abramson (D- New Orleans) Sabotaged His Colleagues, His Party, and His Governor” was a delicious read…

State Rep. Neil Abramson also showed up later on Monday night at the larger inaugural ball, but if I had to guess, I’d bet that no one involved in organizing the event wanted him there. Unlike Les Miles, he most certainly did not show up to pay his respects to the new governor, a man who he had disrespected publicly earlier in the day.

Only hours before, Abramson, a Democrat from New Orleans, helped to sabotage the candidacy of Walt Leger, a fellow Democrat from New Orleans, in his bid to become the next Speaker of the House. Leger had been endorsed by the governor and had been expected to be elected, albeit narrowly. When the election kicked off shortly before Edwards took the oath of office, Abramson hijacked Leger’s campaign by running against him, drawing two votes (including his own) and throwing the whole thing into disarray and confusion.

And now, we find out that Lamar’s math is not the greatest…

Newly elected Republican Rep. Stephanie Hilferty, of New Orleans, was the subject of a threat to gather signatures for a recall petition filed by some of her GOP constituents over worries that she would back Leger, which she did in the first ballot. In the second vote, Hilferty voted for Barras. Her support along with Henry’s votes and the backing of Democratic Rep. Neil Abramson, of New Orleans, provided the Republican’s margin of victory.

Abramson was the only one of the House’s 42 Democrats to back Barras. Seven Republicans went with Leger in the final tally and the two representatives without party affiliation split their vote between the two candidates.

In other words, it is entirely conceivable that Leger could have picked up the additional four votes necessary had he not been the victim of intra-party subterfuge by Abramson. Conservative commentators have already suggested that Abramson orchestrated this maneuver in order to score the chairmanship of the Civil Law Committee, which seems crass.

Regardless though, Abramson helped provide the Louisiana Republican Party with both a public relations and political victory on the very day that a Democrat was sworn in as governor, marking the first time in state history that the governor’s endorsed candidate for Speaker was defeated. Almost immediately after Barras won the speakership, Gene Mills of the Louisiana Family Forum declared victory.

Leger had 49 votes on the first ballot. He had 51 votes counting Abramson’s two.

It takes 53 votes to win a majority in the Louisiana House. Any additional votes Leger was going to get would have had to be Republicans. And Abramson, who is seen as more moderate than Leger, particularly on economic issues (his lifetime LABI score is actually quite good; it’s an 80, and he was a phenomenal 97 in 2015), might actually have been a Democrat version of Barras with a better chance of reaching a majority and offering the Democrats the fulfillment of a dream to have a Democrat Speaker of a Republican House.

Turns out that’s a sentiment Abramson has thought of, and he’s less than enthused about getting raked over the coals by White. This gem appeared at the legislator’s Facebook page… 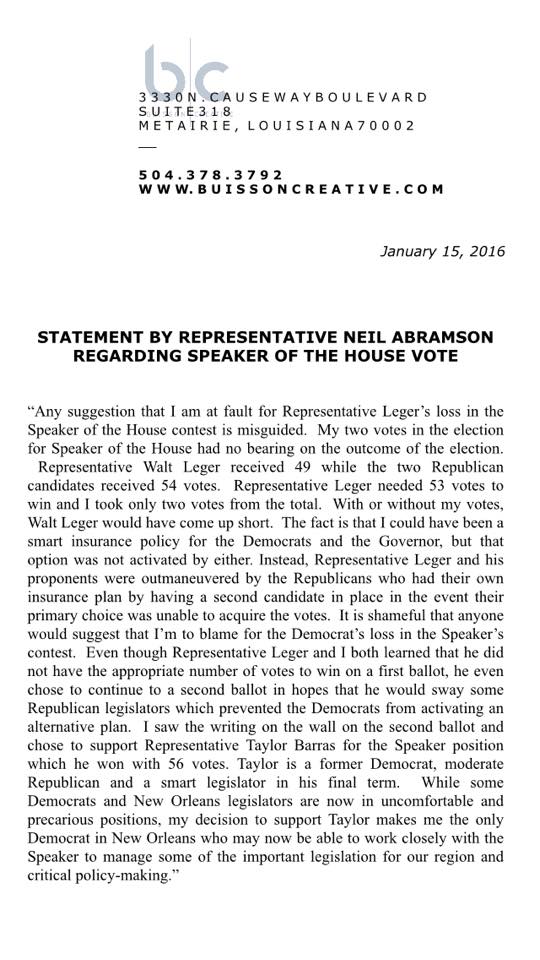 Interested in more news from Louisiana? We've got you covered! See More Louisiana News
Previous Article #FAIL: Not Only Did John Bel Edwards Lie About Who Gets The Credit For Fixing I-10 In Baton Rouge, He Lied About Every Aspect Of The Story
Next Article HUDSON: “The state of the union,” Graham declared, “is broken.”