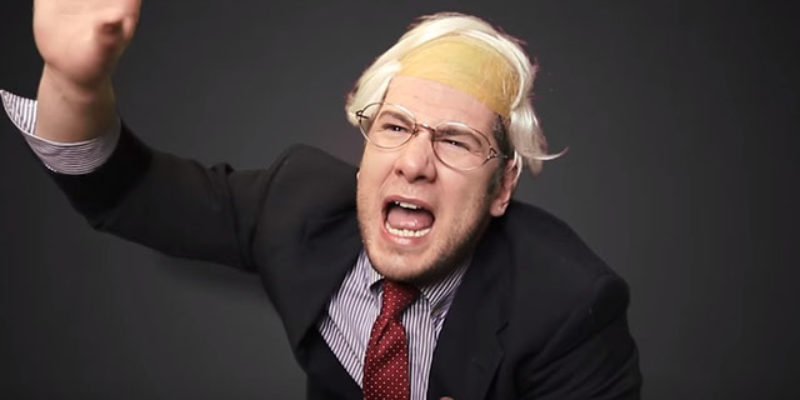 This is well worth 12 minutes of your time, because it’s a hilarious takedown of the moronic but somehow wildly popular communist dictator wannabe Bernie Sanders.

Actually, Crowder makes the case, and it’s a good one, that Sanders is a fascist rather than a communist – and Sanders’ policies as he currently expresses them probably are more fascist than communist despite his background supporting the Soviet Union during the Cold War.

Not that there is a whole lot of difference between fascism and communism. Despite the fanciful ruse that somehow fascism, as most prominently expressed by the National Socialist German Workers’ Party in the 1930’s and early 1940’s, is a “right-wing” philosophy, it is every bit as redistributionist and supportive of limitless big government as communism is, with the exceptions that fascism is “national socialism” while communism is “international socialism” – a distinction without much of a difference in practice should a fascist country be powerful enough to fulfill imperialist desires – and fascism is content to allow private ownership of the means of production so long as it is able to impose confiscatory taxation and ironclad government regulation on productive endeavor. Communists just seize everything and put the dictator’s brother-in-law in charge of the shoe factory.

Thus Sanders is running as a fascist, because a 90 percent top tax rate is the best he thinks he can get in America and he’s much more interested in using the country’s military power against its own people than he is to impose our will on our enemies – which is a bit more of a nationalist approach than an internationalist one, you could argue.

And Crowder makes a significant improvement on Sanders, casting his wild and unhinged pronouncements in the style of Gilbert Gottfried rather than the Larry David impersonation that Sanders offers. There is nothing wrong with Larry David, but when you commonly offer inanities and assclownery such as Sanders does, there should be a suitably off-the-hinges style to match. Crowder sees that; it’s a shame Sanders does not.

Interested in more national news? We've got you covered! See More National News
Previous Article The Low Popahirum, January 21, 2016
Next Article Did You Hear That Kathleen Blanco Just Got Appointed To The Superdome Board?