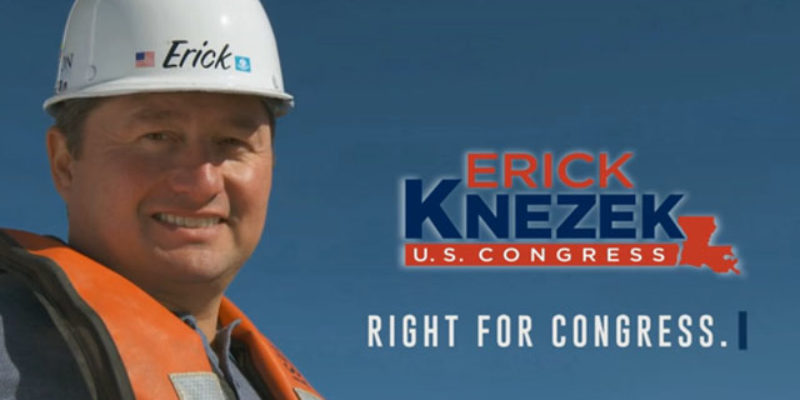 From a press release just landing in our inbox…

“I’m running for Louisiana’s 3rd Congressional District because, like so many Louisianans, I still believe in the American dream.  But I also share their concern that if we don’t fight for it, those opportunities will dim for our children and grandchildren,” said Knezek.

——
Erick Knezek is a candidate for the Republican nomination for Louisiana’s 3rd Congressional district seat being vacated by U.S. Rep. Charles Boustany. He is a successful self-made business owner, a former Navy Seabee and diver, and a member of the Lafayette Parish School Board.

Plus, there’s an announcement video…

Knezek is a guy we’ve heard some good things about, as he’s one of the education reform folks on that Lafayette School Board which has been, for most of the recent past, a nightmare.

He’s clearly positioning himself as a full-spectrum conservative, and perhaps he’ll run as a potential Freedom Caucus guy. Charles Boustany is a lot more aligned with the GOP leadership, so that would be a rightward move for the 3rd District seat.

There’s another candidate from Lafayette in the race – Gregory Ellison, another military veteran in the oil business, who got in two weeks ago with little fanfare.

Greg Ellison of Lafayette, a combat veteran who is a partner in an oil and gas exploration company, has become the first candidate to schedule a formal announcement to run in the 3rd Congressional District race, although others won’t be far behind.

Ellison, a Republican, is a West Point graduate and retired lieutenant colonel who led troops during the first Gulf War and earned a Bronze Star.

He is a partner the Lafayette-based oil and gas exploration company Kitty Hawk Energy.

“The reason I’m running is because I’m concerned about the future of our children in this country,” Ellison said. “I don’t know if they will be able to pursue the American Dream in the same way we did unless we make some changes. We’re deeply in debt as a country and it will fall squarely on their shoulders.”

There are a number of potential candidates for the seat, though it’s been a bit sluggish out of the gate. Scott Angelle is a potential candidate for the seat and it would seem the wise thing for him to do to run for it, but Angelle seems more interested in running for the Senate seat that we’re doubtful he can win. Former state representative Brett Geymann has talked about running for some time, though it would look like a strong candidate from Lafayette would beat him handily. Current state representative Stuart Bishop has also had his name thrown around, though we’re not sure he’s serious about running.

The one candidate who could really change the race were he to get in, and there is no particular reason to think he would get in, is former Lafayette Parish President Joey Durel, who left office this month as one of the state’s most popular local executives. But unless he gets in, this could be an extremely competitive race on the Republican side.

No word on who the Democrats would run.

Interested in more national news? We've got you covered! See More National News
Previous Article Here’s The Unbelievable Story Of How The NOPD Is Destroying Sidney Torres’ French Quarter Task Force With ‘Incompetence’
Next Article FBI Confirms There Will Be ‘Unprecedented’ Amount Of Security For New Orleans Mardi Gras This Year