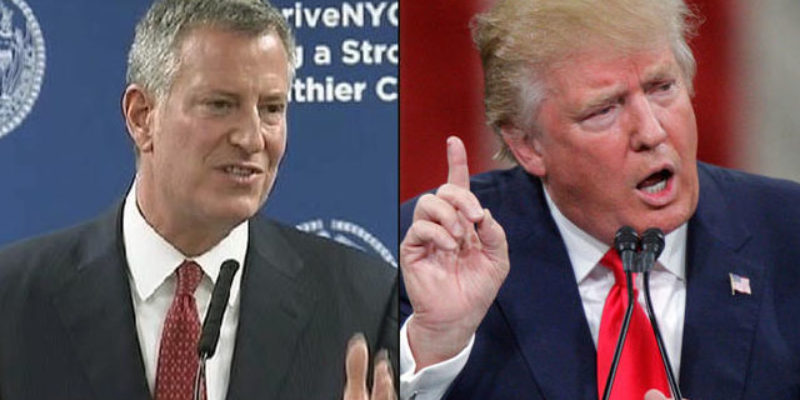 If you say nice things about Donald Trump you could be Jeffrey Dahmer and he’d reciprocate, and it’s perhaps fair to say that in 2013 Trump wasn’t a political candidate. Still, it’s hard to buy protestations of how conservative he is from somebody who saw Bill DeBlasio, a bonafide supporter of the Nicaraguan Sandinista communists and the nation’s chief purveyor of punitive urban socialism, as a potentially great mayor of the Big Apple. By his nature DeBlasio has to be seen as unacceptable if you’re a conservative. Instead, Trump talks him up.

Which, even if Trump didn’t actually mean it, would be of a piece with hiring Hillary Clinton to be a party favor at his wedding.

Most people understand that’s what New York Values means. In the places New Yorkers look down on, Bill DeBlasio isn’t acceptable as a political leader. If he is to Trump, then people need to decide which side of the argument they’re on, because it’s difficult to square Trump as an effective Republican president with Trump as the guy who thinks DeBlasio would do a good job as a communist mayor of the world’s most prominent capitalist city.

Interested in more national news? We've got you covered! See More National News
Previous Article It’s Too Bad You Need A Quarterback In Football, Or Else Les Miles’ Future Would Be Aces
Next Article KENNEDY: Raising Taxes Is A Stupid Idea For Louisiana