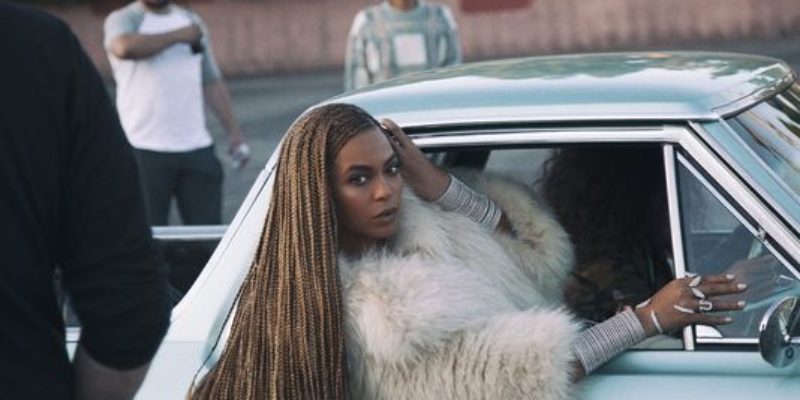 In an ever-so-Beyoncé kind of way, the Queen Bey dropped a New Orleans-inspired song and video titled “Formation” followed by an announcement of a world tour.

While the Gloria Steinam, feminist lunatics of the world will immediately claim anything Beyoncé does as a statement on feminism and a female’s gender role, the Destiny’s Child songstress’ new song is anything but commentary.

In fact, it’s a whole of nothing.

The Daily Beast has already declared it the “Fiery Black Power Anthem,” but is it really? Or does the cultural Left just want their to be a ‘Black Power Anthem’ so that it has a song to use during BlackLivesMatter protests?

While the song is most certainly an homage to Beyoncé’s Southern roots, that’s basically all it is. It begins with Bey’s rap-worthy toned voice singing the following verses repeatedly throughout the song:

Y’all haters corny with that illuminati mess
Paparazzi, catch my fly, and my cocky fresh
I’m so reckless when I rock my Givenchy dress (stylin’)
I’m so possessive so I rock his Roc necklaces
My daddy Alabama, Momma Louisiana
You mix that negro with that Creole make a Texas bama
I like my baby hair, with baby hair and afros
I like my negro nose with Jackson Five nostrils
Earned all this money but they never take the country out me
I got a hot sauce in my bag, swag

The full ten lines are almost entirely about Beyoncé, her hot sauce, the haters and Riccardo Tisci, Givenchy duds. It’s actually written more like a rap song that her husband Jay-Z would sing, something that’s exclusively about living a ghetto fabulous life of riches, fame and street style.

From there, Beyoncé goes on to sing about slaying, Albino alligators and having her ladies get in formation, almost in a militaristic-dance-move sort of way. There may be a reference to militaristic chic, but is that anything new for Beyoncé?

This is the woman best known for an all-girl-group, a song praising ‘Single Ladies’ and proclaiming that girls ‘Run The World.’ It’s been done. And every time, it’s typical Beyoncé. It’s almost expected and basic at this point. But, one could argue that it’s become Queen Bey’s signature. But, it’s also getting a little old at this point.

The biggest problem with Beyoncé’s “Formation” is not actually the song. It could be better, but for the most part, it’s got a down-South quality to it that’s perfect for marching bands and dance-teams at Mardi Gras parades.

The issue is the way the media interprets every little thing Beyoncé does into a feminist line of thought. These are the same feminists who continue to lie about the mythical gender wage gap, the ones who claim masculinity is a disease and the ones who believe women’s entire historical past thus far is chock-full of oppression and nonsense about the alleged ‘patriarchy.’

Except, what the media and feminists do not understand is that the presence and image of Beyoncé actually quashes all of those talking points.

Exactly. That’s because all of the alleged “oppression,” “patriarchal system” and “gender gap” BS is nothing but a lie.

A lie perpetuated by the media, Gloria Steinam and feminists to solely advance identity politics, to have women believe that they can’t make it in life because the cards are stacked against them by men.

Of course, those narratives help fund the 100+ ‘women advocacy’ non-profits that feminists like Gloria Steinam make bank off of.

However, women in western cultures are the most privileged class in all of society. They make up the majority of US universities and colleges. They get to use affirmative action laws to get jobs. They get to marry rich husbands who take care of them for the rest of their lives (shout-out to the Real Housewives of Beverly Hills). They get to use a gender card if anything bad happens to them and the feminists will come around and convince them the system is set against them.

Even in Beyoncé’s industry of pop music, females by large out-live male performers. Katy Perry, Britney Spears, Madonna, Nicki Minaj. Can any of these girls actually sing like Lady Gaga, Adele or Amy Winehouse can? Not at all. But they all remain famous and beloved by the majority of the public.

Where’s all the outrage and backlash about how young boys are left behind today in the education system? Colleges are becoming more and more one-sided to benefit women. Meanwhile, men are told that the classroom just isn’t for them and that maybe blue-collar work is the best they can do.

The workforce is becoming more and more one-sided to benefit women. Any male employee understands that their employer would much, much prefer it if they were a woman. This idea that no one wants to hire women is nonsense. Women are coveted by employers.

And even in legal matters, women are almost always seen as innocent victims who must be telling the truth at all times. Take for instance all of the hoax college rape cases where the media immediately accepted the woman’s story as pure fact.

Then, the feminists came around and convinced them that they were raped because men are predatory figures who harbor a violent streak within. Except, the woman was lying and was never raped, it’s just that the media and feminists get off at accusing men of crimes that they never committed, so fact-checking and the innocent-until-proven-guilty motto go out the window.

Not to mention, the feminists and media have touted all of these phony statistics put together by feminist think-tanks that claim women on college campuses are getting raped every 6 minutes by men or some sort of absurd number. No fact-checking is ever done, except by dissident feminists like Christina Hoff Sommers and Camille Paglia.

Nope, the feminist lies are trotted out by the New York Times and Boston Globe as fact because it would be sexist to question a woman’s facts.

This is similar to what has happened to Beyoncé’s career. Anytime the songstress says a word, the feminists and the likes of Gloria Steinam immediately pounce on it and claim it to be feminist thought.

“Formation” is about Beyoncé, her Southern life, her ghetto fabulousity, her riches, her designer clothes, her love for New Orleans culture, her love to surround herself with women and her admiration of her own fame. It is not intellectual thought that was written to back up every lie about how women are oppressed that Gloria Steinam has spewed.

Now, the music video that accompanies “Formation” is another story. Beyoncé uses imagery to convey a message, rather than her song lyrics, a typical tool of pop performers.

For example, the images of Beyoncé laying atop a New Orleans Police Department (NOPD) cop car while it is submerged in water. It’s an ode to Hurricane Katrina, although the song has nothing to do with Katrina.

There are also the images where Beyoncé so wonderfully has her hair entirely braided in a long, horse mane-like fashion wearing an enormous fur coat circa 2000 and is hanging out the window of an old, pimped-out car. Again, another ode to Southern street culture. It’s that Warholian ‘think rich, live broke’ lifestyle that Beyoncé is portraying.

Of course, the images that have so many up in arms are the ones which depict a young boy in a black hoodie with his hands up while he’s surrounded by a SWAT Team and graffiti-ed signage which reads “Stop shooting us.”

The imagery plays into the BlackLivesMatter message that the crime epidemic in the country is not black-on-black crime, but cop-on-black crime, where police officers kill black men at unprecedented levels.

The problem with the BlackLivesMatter campaign is that it, like the feminists, take things way too far. There’s become a cop-bashing culture where every police officer is demonized and respect for men who put their lives at risk to protect communities is all but gone.

The fact that Beyoncé aligns herself with such a cause is troubling at the least. And in true Hollywood-hypocrite fashion, Beyoncé enjoyed a nice little highway-clearing police escort after leaving the Super Bowl yesterday. But, on the other hand, she demonizes the police in her imagery.

It’s possible that all of the feminist though ridiculousness that has followed Beyoncé’s most recent works have gone to her head (or in this case, weave) and she’s become what the media and feminists painted her as.

A radical feminist with an overt agenda to lay blame on the fake “patriarchal system” and all police officers? It may seem like a stretch, but Yoncé could just be transforming into the leftist-narrative-darling that the media and feminists so badly want her to be.

Interested in more national news? We've got you covered! See More National News
Previous Article Who’s Right In The Christie-Rubio Feud From Saturday’s Debate?
Next Article Isn’t It A Conflict Of Interest For Karen Carter Peterson To Chair The Senate & Governmental Affairs Committee?