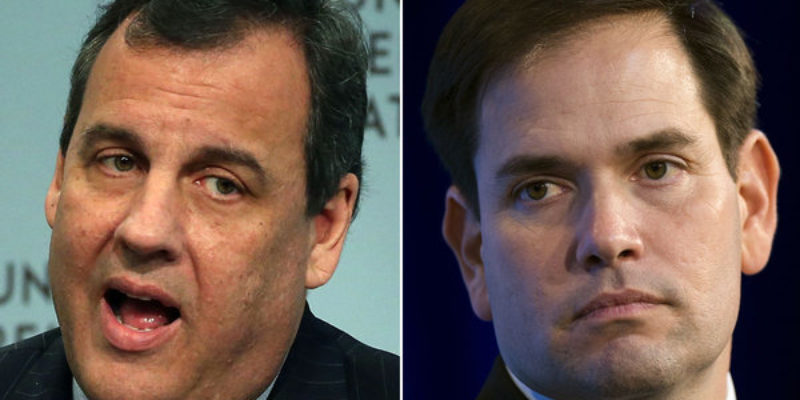 If you watched the presidential debate on Saturday, what you saw was a rough outing for Marco Rubio, the media narrative for whom has been that he’s surging in New Hampshire and who could win that state’s primary election tomorrow.

And this was the roughest part of that outing…

It was an especially damaging exchange, because Christie exposed something about Rubio that has been gaining notice – the fact that he tends to be quite repetitive with some exceedingly simple messaging designed to make him as anodyne and inoffensive as possible within the GOP primary electorate. Christie saw that as an opportunity and blasted him for his little pre-programmed speeches, and then tried to turn that into an argument for electing a governor like Christie, who has to do more than just recite canned speeches.

Rubio is capable of a lot more than the programmed 25-second sound bite, moreover. It was a bit off-putting watching him continuing to return to the same point after he’d already made it without expanding on it to discuss why it matters that he thinks Obama knows what he’s doing and is deliberately tanking the country rather than just careening from one mistake to another.

But as Andrew McCarthy notes at National Review, Christie wasn’t just objecting to the robotic quality of Rubio’s rhetoric – he was attacking the substance of what Rubio said…

In the post-mortem, it has been noted repeatedly that Christie attacked Rubio as an unaccomplished, programmed candidate. But Rubio’s alleged insufficiencies were only one part of Christie’s argument. The other, the actual premise of Christie’s critique, was the analogy of Rubio to Obama.

Christie contends that the Obama who ran for president in 2008 was an unaccomplished, hyper-programmed, first-term senator who was utterly unprepared to be president. That, according to Christie, has caused seven years of amateur-hour governance. To elect Rubio, he thus concludes, would be to invite another disastrous presidency led by an untested young man who would be in way over his head.

But McCarthy sees a more fundamental difference at work.

The Christies of the Republican party insist that the country is in disastrous shape because Obama was not up to the job. In truth, Obama used Democratic congressional control when he had it to push through Obamacare and Dodd-Frank; ever since, having taken the measure of feckless GOP opposition, he has skillfully (albeit illegally) exploited executive power to pursue progressive objectives. Obama has been plenty up to the job as he intended the job to be done.

This reality is not helpful to a Christie, who wants to be seen as a pragmatic problem-solver willing to “cross the aisle.” The logic of Christie’s championing of bipartisan cooperation “to get things done” has necessarily meant working in furtherance of Obama’s agenda (and, in New Jersey, working closely with Democrats – which is how you get multiple credit downgrades). No one courting the Republican base can afford to be seen as complicit in Obama’s program. So, for Christie, if Obama is to be portrayed as a failure, it’s got to be because Obama wasn’t prepared to be president, not because of policies Republicans have supported.

Rubio was absolutely right to make the point that Christie’s portrayal of Obama was badly flawed. Unfortunately, (a) having made the point once, there was no need to repeat it twice, and (b) having infamously colluded with GOP progressives on immigration and foreign policy debacles (e.g., Libya), Rubio has trouble making the case that Christie has a motive to limn Obama as a bumbling neophyte. Consequently, Rubio appeared to be repeating talking-points about Obama to no good end, rather than connecting them into a sharp appraisal of Christie’s vastly overrated record of executive accomplishment.

It’s a case, where Rubio is concerned, that winning the argument doesn’t necessarily mean winning the election.

Rubio has to show the Republican electorate that he’s not a “Republican Obama,” at least not in the negative connotation that if you nominate a first-term senator without any particular executive experience you won’t get good governance. So in order to make his case he has to impress on the public that Obama’s “failures” in governance don’t come from incompetence – they’re deliberate and they’re calibrated to move the country to the Left. And in that effort he’s been enormously successful.

Which, though it goes unsaid, is an argument for putting Rubio in office so as to play that precise dynamic back on the Democrats and be a “Republican Obama” in a way most GOP voters would love.

The question is whether Republican voters would react the same way to a mirror image of an Obama the way Democrats have to the real thing. Republican voters don’t operate the way Democrat voters do; a Republican president who abuses the Constitution in order to force the country to the right, while tubing America’s prestige around the world and presiding over a poor economy that especially hurts Democrat constituencies rather than the Republican-leaning middle class, will not be a particularly popular one.

The reason Ronald Reagan is a Republican hero is that Reagan moved the country to the Right within the Constitution, bolstered American prestige and helped to spark a protracted and historically significant economic recovery that produced a far larger and healthier middle class than when he came to power. And one reason he was able to do those things is he had the executive experience to pull them off.

But McCarthy is correct on both Rubio and Christie, and the reason neither candidate can really make hay on this question. Rubio has better conservative bona fides than Christie, whose record in New Jersey gives little indication that he would make significant changes to Obama’s agenda as president. But while Rubio has a firmer ground to stand on in saying Obama is a successful ideologue rather than an incompetent administrator, his inability to flesh that question out during the debate only contributes to Christie’s indictment of him as an empty suit.

The sense here is the debate did significant damage to Rubio’s prospects in New Hampshire and might well have pulled him back into the crowd in the Establishment Lane with Christie, John Kasich and Jeb Bush when he thought he had gotten past that problem with his Iowa performance. If he’s going to move forward, he’s going to have to find a way to better make the case that a “Republican Obama” can govern as well as make ideological maneuvers.