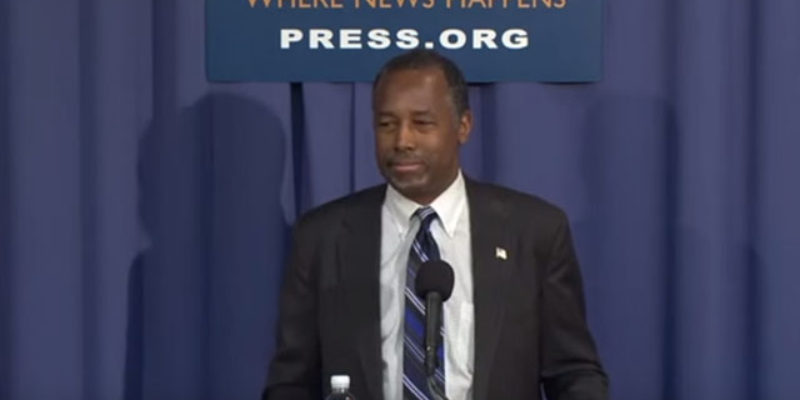 Via Leon Wolf at RedState, who got it from Phil Kerpen, this is 34 seconds of proof that Ben Carson is out of the presidential race whether he admits it or not, and proof that Ted Cruz and Marco Rubio did nothing wrong in feeding the corpse of Carson’s campaign to their supporters in Iowa as a means of upping their vote totals.

The story about Carson abandoning the campaign trail this week to go home to Florida was reported by CNN after someone in Carson’s campaign put it out. This we know, and Carson has confirmed it. What he’s angry about is that Cruz, and as it turns out Rubio as well, didn’t protect him from the negative political effects of that story getting out.

Watch this video, and then we’ll have more…

So there’s a pretty obvious double standard, particularly when Carson refused to accept Cruz’ unnecessary apology for the kerfuffle unless Cruz was to fire his staffers who had circulated the CNN story.

And then it got worse, when after he seemed to realize the box he’d put himself in he got defensive and asked if it made him a horrible person to go home to Florida. Of course not, Ben, but it also means that you voluntarily put yourself at a major disadvantage. You’ve already run a poor fourth in Iowa, and now you’re not even going to campaign in New Hampshire when Jeb Bush, John Kasich, Chris Christie and Carly Fiorina, who you best in Iowa but not by insurmountable margins, have all been camping out in and are making their stand in.

It’s as simple as that. Now would be the time to bow out gracefully and stop the whining.

Interested in more national news? We've got you covered! See More National News
Previous Article SPECIAL REPORT: How Immigration Into The US Has Become A Haven For Criminals, Drug Cartels & Gangs
Next Article Obama Fantasizes About A $10 Tax Per Barrel Of Oil, And Predictably Gets Told To Shaddap