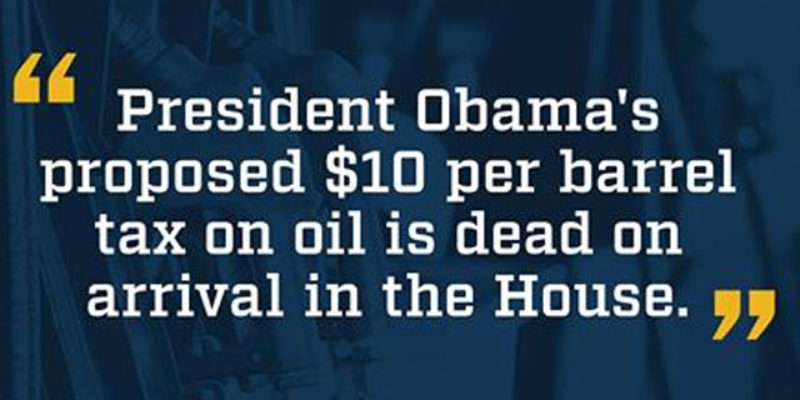 So says Louisiana’s congressional delegation, as you might imagine.

The proposal by the president, who if you’ll remember rattled out a vague idea for incentivizing communities and states which have as major parts of their economies the production of “dirty” fossil fuels to abandon those sins against Gaia and embrace the production of unicorn farts or whatever it is he thinks they ought to be doing instead, is a doozy…

President Barack Obama is about to unveil an ambitious plan for a “21st century clean transportation system.” And he hopes to fund it with a tax on oil.

Obama aides told POLITICO that when he releases his final budget request next week, the president will propose more than $300 billion worth of investments over the next decade in mass transit, high-speed rail, self-driving cars, and other transportation approaches designed to reduce carbon emissions and congestion. To pay for it all, Obama will call for a $10 “fee” on every barrel of oil, a surcharge that would be paid by oil companies but would presumably be passed along to consumers.

There is no real chance that the Republican-controlled Congress will embrace Obama’s grand vision of climate-friendly mobility in an election year—especially after passing a long-stalled bipartisan highway bill just last year—and his aides acknowledge it’s mostly an effort to jump-start a conversation about the future of transportation. But by raising the specter of new taxes on fossil fuels, it could create a political quandary for Democrats. The fee could add as much as 25 cents a gallon to the cost of gasoline, and even with petroleum prices at historic lows, the proposal could be particularly awkward for Hillary Clinton, who has embraced most of Obama’s policies but has also vowed to oppose any tax hikes on families earning less than $250,000 a year.

During Obama’s first year in office, he was so concerned about the politics of taxes that he scuttled a Democratic transportation bill just to avoid a debate over a gasoline-tax hike. Now in his last year in office, he seems to be actively courting a similar debate. A White House memo outlining his plan suggested that its $10-a-barrel fee would not only be necessary to pay for his sustainable transportation dreams, but would do some good on its own by increasing fossil-fuel prices and creating “a clear incentive for private-sector innovation to reduce our reliance on oil and invest in clean-energy technologies that will power our future.”

And what have we heard all over the country – and in particular here in Louisiana? That our infrastructure is crumbling, the roads and bridges are in collapse and something has to be done. If we’re not mistaken, that was the rationale for the trillion-dollar stimulus plan he forced through Congress in 2009.

But the whole plan is designed to do something else, destroy the oil industry. The wacko greenie left is not even hiding that fact anymore. Their plans are to put the thousands of Louisianians who work in the oil and gas industry out of work.

The Louisiana delegation sent statements out blasting it.

First up: Congressman Charles Boustany, who is running for Senate

Boustany said: “This President has relentlessly attacked the American oil & gas industry and the working families who depend on these jobs. Today, oil prices are at their lowest point in over a decade, and the workforce is hurting. But the President is proposing a tax hike that will be passed on at the pump to these same families who are trying to make ends meet.

“This is another absurd attack on American energy, and it has to stop. I will personally see to it this new tax never sees the light of day.”

According to POLITICO, the White House said the proposal will be included in the President’s final budget request next week.

Next up, we have House Majority Whip Steve Scalise:

“President Obama’s proposed $10 per barrel tax on oil is dead on arrival in the House. From day one of President Obama’s Administration, he has waged open warfare on American energy and his radical policies have cost jobs while increasing costs on hard-working families. Washington spending is already too high, and the best way to create more jobs and get our economy back on track is by cutting taxes and controlling spending. The House will kill this absurd proposal, and instead focus on lowering costs and growing our economy.”

The politics though are going to be great for the Democrat Party unless Republicans get out in front of it. The Democrats will portray Republicans as in the pocket of Big Oil and opposed to clean energy.

Republicans need to make the argument about how this will hurt middle and working class Americans. Drive this home all over the country.

UPDATE: Congressman Ralph Abraham just sent this to us:

“The President’s proposal is nothing more than a plan to raise taxes on our families. Gas prices will immediately spike by 25 cents per gallon. That means a family could be paying as much as $7 or $8 more each time they fill up the family van. President Obama is clearly willing to subject our struggling poor and middle class families to greater financial burdens for the sole purpose of appeasing radical environmental activists. An additional tax burden on hard-working Americans is not the answer, and I will never vote to support such an irresponsible tax increase,” Dr. Abraham said.