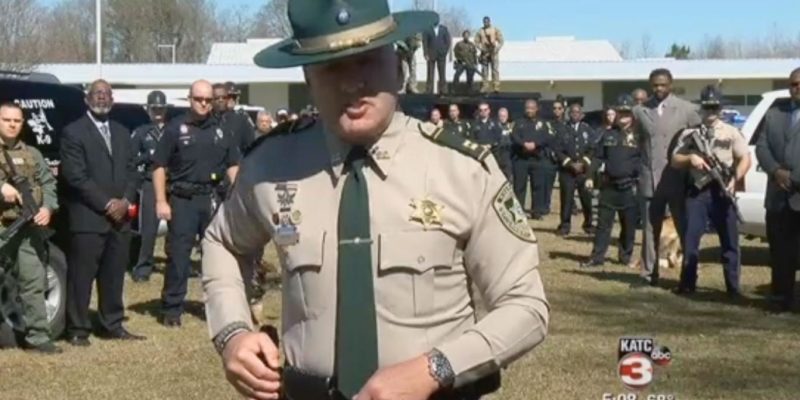 Last week, St. Landry Parish Sheriff Capt. Clay Higgins and other local authorities in the Acadiana area declared an all-out war practically against one of the state’s most violent and brutal street gangs, known as the Gremlins.

As the Hayride reported, the video of the Higgins telling gang members that they will be ‘hunted’ has gone viral, getting a spotlight in the Washington Post and Bill O’Reilly is even featuring the video on his show tonight on Fox News.

However, the National Action Now organization is upset with Higgins for being apparently, too harsh on the Gremlin gang members.

National Action Now President Rev. Raymond Brown went on Louisiana radio this week to claim that the video is “racially tainted” and that “A white cop particularly should not call black men animals.”

Higgins, who is referred to as the ‘Cajun John Wayne,’ has a long history of having a no-nonsense policy for criminals.

And it’s not just the National Action Now group going after Higgins. The American Civil Liberties Union (ACLU) claims that the message is an “aggressive search and seizure tactic,” according to WBRZ-Baton Rouge.

Worst of all is that the St. Landry Parish Sheriff Bobby Guidroz said that he will talk to Higgins about being less offensive, pandering to the hyper-sensitive crowd, saying “there are some things that I’m going to guide him in to not saying.”

The National Action Now is not to be confused with Al Sharpton’s National Action Network, which has staunchly aligned itself with the #BlackLivesMatter movement, a group that advocates for violence against police officers and law enforcement.

Sharpton’s National Action Network has also involved itself in the New Orleans monuments fight, immediately jumping on Mayor Mitch Landrieu’s call to remove four historical monuments in the city on the basis that they are “offensive” and “racist.”