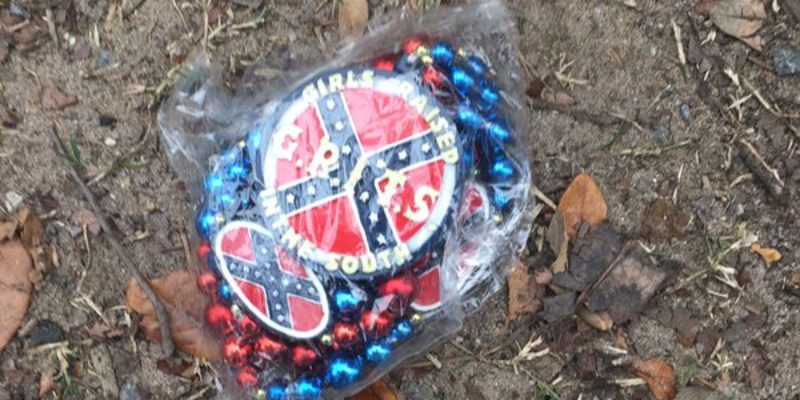 A Mardi Gras-goer, specifically an African-American resident of the city, caught one of the beads and found it offensive. And according to the Times Picayune, others have caught Confederate flag beads as well.

“Andre Perry, a New Orleans education consultant, said he was shocked on Sunday (Jan. 31) afternoon when he noticed that his 5-year-old son had caught a necklace of Mardi Gras beads studded with plastic Confederate flags, thrown from a float in the Krewe of Carrollton parade,” the Times Picayune reports.

Others who caught the beads and found them offensive told NOLA.com that they just threw them on the ground. Some beads showed the rebel flag, as well as the acronym “G.R.I.T.S.” which stands for “Girls Raised In The South.”

A few NOLA.com comments left on the story found the report by the Times Picayune to be over-the-top.

“I wish people in this city got easily offended/angry at the violence penetrating our streets,” one wrote.

“Where are the bead police when we need them. Get the monument commission on it pronto, Mitch. .” another commentor wrote.

Interested in more national news? We've got you covered! See More National News
Previous Article ABUSE & MISUSE: The Shocking Report About What Has Been Going On Inside Louisiana Veterans Affairs Office
Next Article Y’all Heard That Arlo Guthrie Mayor Of New Orleans Parody Song Yet?