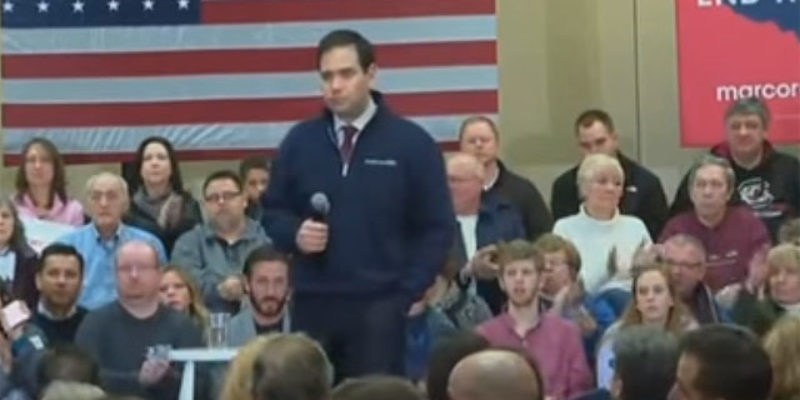 Marco Rubio, it’s fair to say, has underachieved so far in the presidential race. Rubio had an opportunity after Iowa to consolidate the “establishment lane” to the GOP nomination by pushing aside the other candidates competing in that lane – principally John Kasich and Jeb Bush – and failed to do so, largely because of the beating he took in the debate before the New Hampshire primary. The effect of that performance, which wasn’t uniformly bad but contained a terrible exchange with Chris Christie in which Rubio kept repeating the same line about how Barack Obama is not an incompetent president but a quite effective leftist ideologue moving the country in the direction of socialist Europe, led to Rubio running a disappointing fifth in New Hampshire and standing in a crowded pack behind Donald Trump and Ted Cruz in South Carolina and beyond at this point.

Christie’s campaign died after New Hampshire, so Rubio did survive that debate exchange. But until he can get Jeb Bush and John Kasich out of the race and attempt to consolidate their voters behind his campaign, he’s going to struggle to fulfill his campaign plan – namely, to present himself as a committed conservative who is nevertheless electable with a positive message that can grow the Republican coalition.

That can happen for him if he can finish ahead of Bush Saturday night, particularly if he can do it with some separation between the two. If Rubio could find a way to climb above Cruz – one recent poll buts the two tied at 18, in second place behind Trump’s 35 percent – and take second in South Carolina, then he can have a future in this race.

Is that realistic? We’ll see. Bush is banking a lot on South Carolina, and there are elements of the electorate there which could combine for a solid finish for the former Florida governor. There are high stakes in South Carolina, and Rubio is fighting for his very candidacy.

He’s got to be on his game this week. He can’t afford to give any more support to the charges that he’s a robot.

What Rubio needs is a long string of performances like this one, which might be the best 10 minutes of any candidate in the 2016 campaign.

Interested in more national news? We've got you covered! See More National News
Previous Article Finally, There Is Some Pushback Against The Higher Ed Voices Of Doom
Next Article VIDEO: Cruz-Affiliated PAC First Out Of The Gate With Questions About Trump And The Supreme Court