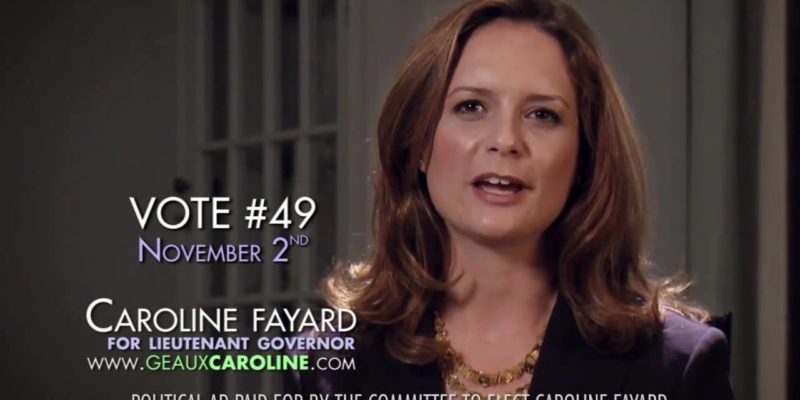 Seeking Sen. David Vitter’s (R-LA) contested US Senate seat as a 30-something-year-old Democrat is not an easy job in an election cycle where politics are more polarizing than ever in ruby red Louisiana.

For Caroline Fayard, though, her Senate bid comes with a couple connections to two of the most powerful political dynasties in the state and country: The Landrieus and the Clintons.

Fayard’s political connections to the Clintons go back to the 1990’s. After graduating law school, Fayard went to work for then-First Lady Hillary Clinton in the White House as an intern.

Obviously, Fayard made an impression on former President Bill Clinton and now candidate Hillary Clinton while working at the White House because in 2010, when Fayard was running for Louisiana Lt. Governor (a race which she lost), Pres. Clinton contributed to her campaign.

Meanwhile, Fayard and her father, Calvin, have had a similar history with the Landrieu political dynasty, a family that has governed in the state for decades now.

And when Landrieu needed help with his re-election bid in 2013 as Mayor of New Orleans, Caroline and Calvin Fayard were there to throw cash at the Landrieu machine.

Interestingly enough, there is one characteristic that surrounds the Fayards, Landrieus and Clintons: High-profile scandals.

For the Landrieu’s, Mary Landrieu is most remembered for being the scandalous final vote for Obamacare after she was practically bribed with $300 million in state funds so long as she supported the healthcare overhaul.

Mitch Landrieu, on the other hand, is not particularly known for scandal, but more so for questionable practices while running New Orleans city government, such as his scheme (which the Hayride has covered extensively) to remove four historical monuments in the city via a slew of backroom meetings and using private money to pay for the job.

For Caroline and Calvin Fayard, their alleged scandal concluded with a sweeping-under-the-rug kind of ending. As chronicled here by the Hayride, essentially Calvin Fayard dropped $800,000 on the Louisiana Democratic Party and then allegedly illegally earmarked those donations to Caroline’s then-Lt. Governor campaign.

With the Landrieu and Calvin Fayard-backed Hillary Clinton likely to get the Democratic nomination for president, it would truly be no surprise to see Caroline Fayard publicly backing Clinton as well.

But more importantly, will Clinton (along with the Landrieu’s) be publicly backing Caroline Fayard as Vitter’s replacement? That question currently remains unanswered.

Interested in more national news? We've got you covered! See More National News
Previous Article VIDEO: All This Rain Is Making For Some Pretty Major Flooding In North Louisiana
Next Article The Battlefield, March 11, 2016 – Delegate Math