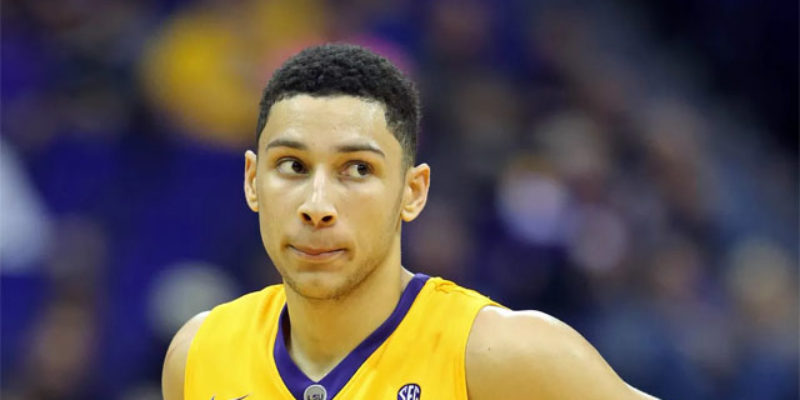 Now that Ben Simmons has announced he’ll be hiring an agent and going pro – our suspicion is that Simmons hired one before the season even ended and that’s one reason LSU turned down an NIT bid, but we’re speculating on that a little – the analysis of his LSU career has begun.

It’s hard for me to believe that Simmons’ game was developed all that much in his one year at college. He played on a disappointing LSU team that underperformed wildly. His coach, Johnny Jones, seemed in over his head from the start and did little to improve the part of his game that Simmons needed working on — his shooting.

Those are the two big arguments for having players play in college, and both I usually agree with. College allows players to improve parts of their game that need work and allows them to learn how to be a part of a team that wins. Simmons accomplished neither of those things.

So he didn’t learn to win and he didn’t learn how to shoot. He did learn how to be marooned on a team that relied on him heavily, and showed that he didn’t fit well in that role — hurting his draft stock in the process. (It’s not inconceivable that he could drop from the first pick after this season.)

As for the other arguments for college, that it teaches athletes responsibility and makes them work on their degree, well, Simmons showed that he didn’t get much of those either.

He admitted as much that he didn’t care much for his classes in his one semester as a student at LSU, and now with his focus on the NBA draft, I find it hard to believe he’s going to be buckling down too much with his Oceanography class. Simmons came, played basketball with a disappointing team, and is now leaving.

Again, I ask, what good did this do for anyone?

Those are all valid points.

They’re saying it about Simmons. And it’s not that Ingram or Murray are more studious than Simmons is. It’s that Ingram is playing for Mike Krzyzewski and Murray played for John Calipari.

Those guys can develop one-and-done players and get them to perform at an elite level commensurate with NBA stardom – which in Krzyzewski’s case is ironic given that he was a holdout of sorts when it came first to kids leaving early and then to taking one-and-dones; he adjusted pretty well to that new reality and hasn’t skipped a beat with one-and-dones on his team. Johnny Jones isn’t in their class.

Dick Vitale, commenting after a Simmons-led LSU team finished its season getting annihilated 71-38 by Texas A&M – and we’re about to get to the NCAA Sweet 16 on Thursday and nobody in the country has scored fewer points than LSU did that day, launched into a discussion about one-and-dones like Simmons and took the position that nobody who expects to play only one year of college basketball should sign with a program other than the Dukes, North Carolinas, Kentuckys, Michigan States, Louisvilles or Indianas of the world – for fear they’d end up exactly like Nate Scott characterizes Simmons’ year at LSU.

You could see Ben Simmons play this year and you could tell why he’s talked about as the top pick in the draft. Simmons is one of the best defensive rebounders you’ll ever see, and a more athletic 6-10, 240 pound player you will never find. He’s one of the most effective dribble-drive artists in the game and he’s pretty amazing in transition. When it comes to the building blocks of a player’s game there is an unbelievable amount to work with.

But the thing is, in watching Simmons you’d be excused for thinking that he’d really benefit from one more year in college. The total absence of a mid-range jumper, much less a three-point shot, is striking, particularly for a player who handles the ball on the perimeter as much as Simmons does. And the lack of defense, and inattention to moving his feet on defense, is something that also jumps out at you. You’d see that and say “with one more year of development this guy really would be worthy of the top pick in the draft.”

But where Vitale’s point plays into this is while an LSU fan watches Simmons and thinks he could really be good as a sophomore, a Kansas or Kentucky fan sees him at the end of the season, compares him to what he looked like at the beginning of the season and says “that kid wasn’t developed at all and the coach did an atrocious job with him.”

At schools like that when they get an elite talent they only expect to have for a year, they put him on a fast track for development and they coach him HARD to make him as productive as possible and to make his time there count.

Simmons wasn’t LSU’s problem this year. Bad coaching, bad chemistry and bad attitudes were LSU’s problems. But for Simmons’ 19 points and 12 rebounds a game LSU would have collapsed into a pit of awful considerably sooner than it did.

But Simmons wasn’t LSU’s solution, either. One questions whether anybody could have been.

And that’s a damn shame.

All weekend long I watched teams like Stephen F. Austin, St. Joseph’s, Northern Iowa, Middle Tennessee State, Hawaii and Little Rock give a great account of themselves, and none of those teams had the talent LSU had. I’m not just talking about Simmons; the abovementioned clubs would have had trouble finding a Keith Hornsby, Tim Quarterman, Antonio Blakeney or Craig Victor. And it didn’t matter, because their players were coached up and they competed at a fantastic level before each of them ran out of gas against excellent teams now in the Sweet 16. Watching those teams play and comparing them to LSU was depressing.

Depressing. They’re all mid-major programs which could never pull in a Ben Simmons. Or, for that matter, a Blakeney or a Victor. And yet LSU’s team this year wouldn’t beat any of them on a neutral court more often than not.

Guess what? Going forward, after this year’s experience, LSU couldn’t pull a Ben Simmons, a Blakeney or a Victor, either. After Jones’ failure to develop Simmons or milk so much as an NCAA bubble berth with him on the roster, nobody of any quality is ever going to sign with him again.

And most depressing is that after a season so disappointing and ultimately pointless as to call into question the entire structure of the college game, nothing apparently will be done this offseason.

Zero consequences. To impose any, to pay Jones a buyout, would “look bad” for LSU’s prospects of getting funding at the Legislature.

Jones makes $1.5 million a year. Reportedly his buyout, and that of his assistants, would come to about $1.8 million over three years. So LSU could pay the buyouts out of the basketball budget next year and still have $900,000 to pay a coach.

Based on data available just by Googling the coaches of the teams above, here’s what they’re making…

Martelli and Jacobson make what they’re making because they’ve been at their current schools a good while and have opted to stay after repeated attempts by bigger schools to hire them. Davis has been at Middle Tennessee for 14 years, and he would likely have moved up earlier but for his career getting sidetracked by allegations of NCAA violations when he was a young coach; that’s kept his earning potential down.

The other guys have shown themselves to be astonishingly good coaches who would in all likelihood jump immediately on a $900,000 offer at LSU given the size of the raise it would entail and the opportunity LSU presents compared to where they are.

And that’s not even an apt comparison. For one thing, this isn’t the list of who’s available that LSU could hire; it’s only a small portion of the list. LSU could easily add other rising stars like Dayton’s Archie Miller (who would be the Cadillac hire of all Cadillac hires), VCU’s Will Wade (he’s only been there for a year, but prior to taking over for Shaka Smart he built the program at Chattanooga which won 29 games this year) or Bryce Drew at Valparaiso (Drew won 26 games and his conference’s regular-season title, and that wasn’t enough to get him into the NCAA Tournament; do you think a raise from $285,000 per year to $900,000 at LSU where there are no limits to what he could achieve might be attractive to him?). Or maybe even a bigger name who isn’t happy where he is.

The point being that there are lots of coaches out there who have demonstrated a greater ability to maximize their talent than LSU’s coach has, and LSU is going to stay with a coach everyone knows is only going to decline after swinging and missing with Simmons – because LSU wants the state legislature to believe it can’t afford to make a better hire.

And this is a lie, for a couple of reasons. First, the money to pay Jones’ buyout wouldn’t come out of LSU’s budget. If school president F. King Alexander would allow athletic director Joe Alleva to make a change, Alleva could pick up the phone and with one or two checks he’d have that $1.8 million. There was $15 million available to buy out Les Miles’ contract last fall; don’t think for one second there isn’t 12 percent of that figure available to buy out the guy who had Ben Simmons and couldn’t even make a postseason tournament.

And second, if LSU really is broke they can’t afford not to fire Jones. Bear in mind that the average season ticket for LSU basketball goes about $200. LSU’s average paid attendance went from 8,800 to 11,200 this past season, largely thanks to the excitement of having Simmons on the team. That whole increase, more or less, can be attributed to increased season ticket sales. Would you not think, given the failure of the season, that number comes back down without hiring a new coach to give the fans some hope LSU might be in the NCAA dance in the near future? Let’s assume season ticket sales only decrease by the 2,400 they increased thanks to Simmons, given the number we’re working with. That’s $480,000 in lost revenue, before LSU has sold any Cokes, hot dogs or nachos. Or t-shirts or sweaters.

It’s irresponsible management to let the program bleed out. If this is happening because Alexander thinks the legislature will punish him for allowing a change to be made, then the legislature ought to demand that he do what’s necessary to present the university in a positive light where it can if he wants their help to fix his budgetary issues.

Otherwise, there’ll be little hope of ever having a Ben Simmons at LSU again. Or even deserving to have one.