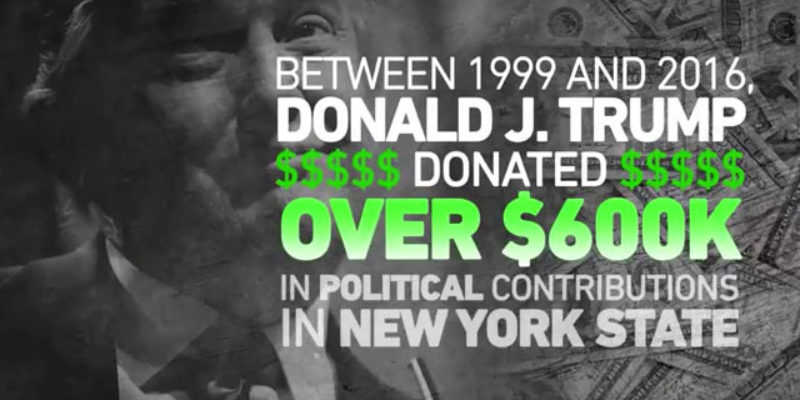 You might have noticed that Ted Cruz did the network morning-show car wash on virtually every channel yesterday. He was in studio for all of those shows, in New York.

As it happens, while Cruz is in Janesville, Wisconsin tonight (Janesville is where Paul Ryan is from, and you’d almost wonder if perhaps there’s a potential Ryan endorsement of Cruz in the offing given the recent spate of “establishment” Cruz endorsements), he’s beginning to show that he’s going to make an effort at dislodging Donald Trump in his home state.

Is this a total waste of Cruz’ time? It could be. An Emerson College poll from last week placed Trump at 64 percent, with Cruz at only 12.

It’s unlikely Cruz is going to clean up that margin. Trump is going to win the Empire State. But how big a win he gets is the question, and when you understand the mechanics of New York’s primary you’ll see why that ad popped today and why Cruz is going to fight it out despite the ugly polls.

Meaning that you can capture a whole lot of delegates in New York by converting relatively few people. It’s a closed primary, so in a congressional district in, say, the Bronx where there might be 5,000 registered Republicans or even less, and if you’re a Republican in a place like that it’s probably because you’re a hard-core conservative and not because you’re going with the crowd, Cruz might well be able to walk off with three delegates by getting 1,500 votes or so.

So if Trump gets 60 percent of the vote in New York but Cruz manages to get 35-40 delegates out of the 95 allocated in that primary because he was able to make the right moves in a dozen or so congressional districts, Trump doesn’t win the victory he expects to.

The fact that outside of Wisconsin there is very little on the plate before New York means Cruz is likely to charge the bayonets in that state quite a bit between now and then. You’re going to see a great deal of messaging from Cruz in the next three weeks about all the slimeball Democrats Trump has bankrolled.

When Republican presidential contender Ted Cruz took the stage in a packed room in Midtown Manhattan on Wednesday, he led with a platitude that raised eyebrows.

The introduction was a far cry from Cruz’s invocation of “New York values” as a slight against rival Donald Trump in front of Iowa voters in January.

On the heels of his victory in the Utah caucuses in the wee hours of Wednesday morning, Cruz declared that New York would be “a battleground” between himself and Trump.

He also previewed how he planned to flip the script in Trump’s home state: undermining Trump’s credibility as a conservative and working to chip away at Trump’s lead in downstate areas like New York City.

During his speech, Cruz repeatedly hammered Trump. Among other things, he listed various Democratic lawmakers whom Trump donated money to in past elections.

“Donald Trump over and over again has supported Andrew Cuomo and Hillary Clinton and Anthony Weiner and Eliot Spitzer,” Cruz said. “So next time you think of all the disastrous policies that have been foisted on New York, you can thank Donald Trump for bankrolling those efforts.”

The senator is nevertheless working hard in the state to stop Trump from hitting the 50% ceiling in individual congressional districts that would help the Manhattan billionaire win the majority of the state’s 95 delegates. If Trump dominates in New York, then he’d come significantly closer to clinching the 1,237 delegates needed to secure the GOP nomination.

“We think we can pull a few delegates here and there, especially downstate where there were a lot of Rubio supporters who are coming on either publicly or behind the scenes,” Wax said, referring to Florida Sen. Marco Rubio, a former candidate.

Wax said that Cruz would be back in the state before the April 19 primary, and his wife, Heidi Cruz, would be holding a March 29 event in Sheepshead Bay, a Brooklyn neighborhood, as well as events in Staten Island and on Long Island.

He also said that the campaign also wants to win a symbolic victory in Queens, the borough Trump grew up in.

“We think we can make some headlines here in New York, especially Queens. We think it’d make a great headline to win there,” Wax said.