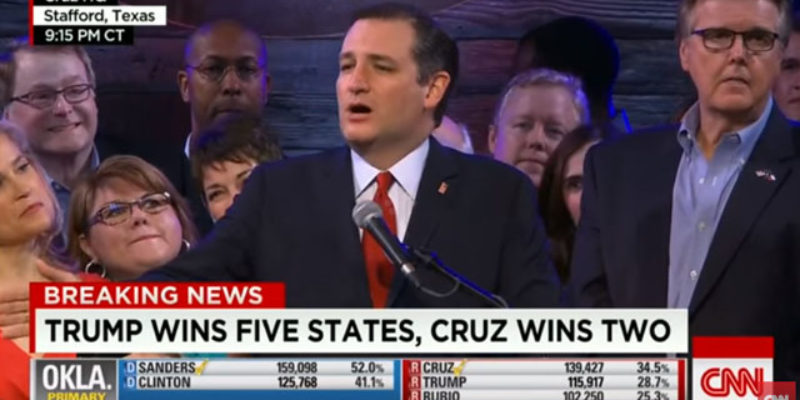 It’s interesting, because he’s demanding that the other candidates in the race – John Kasich, Marco Rubio and Ben Carson – go home. And in the aftermath of Super Tuesday the conventional wisdom seems to be that the way to beat Trump going forward is for all of them, or at least Rubio and Kasich, to stay in and keep Trump from getting to 1,237 delegates before the convention.

One example of that wisdom is here, and another is here.

And at the time Cruz was speaking, Marco Rubio hadn’t won Minnesota yet. It’s also interesting that Trump came in third in Minnesota with only 21 percent of the vote, particularly when you consider that Minnesota had Jesse Ventura as governor for four years. Perhaps there’s a possibility Minnesotans have seen the future and weren’t crazy about it.

Anyway, this is a pretty blistering speech against Trump, but it’s all on substance. The question is whether a doctrinaire conservative message and critique against Trump is going to work when so many Republican voters don’t seem to care anymore. He might do better with the “Washington corruption” angle he starts in on around the 9-minute mark than the policy stuff.