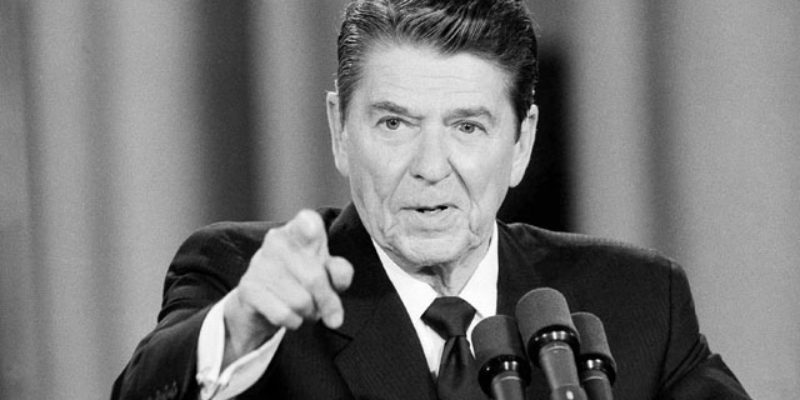 Over at Ace of Spades is an interesting post with a discussion of this business of Marco Rubio and how much credit he should get for running an “optimistic” campaign.

Ace isn’t overly impressed with “optimism” as a political tool, particularly in a cycle like this one when the public is clearly NOT optimistic about the country’s future, and notes that the most successful presidential politician of the modern age, Ronald Reagan, certainly didn’t win the White House on optimism.

I think people continue to remember Reagan’s 1984 campaign. That was indeed “optimistic.” The campaign slogan was “It’s Morning in America Again.”

And why shouldn’t Reagan have been optimistic? He was president, for one thing. For another, the economy had been growing gangbusters for a year and a half before the election.

But in 1980 — when he was actually facing an incumbent president of the opposite party — was he “optimistic”?

Charles Cooke goes through some reasons Marco Rubio lost, and cites his optimism as one reason.

I’d note, atop the justifiable criticism, that even if Rubio had run a perfect campaign, he would probably have lost this year’s nomination. It;s not just Trump– although Trump, sui generis as he is, is a huge part of the story — and it;s not just the “Gang of Eight”; it’s that the country is simply not in the mood for an optimist such as Rubio. Look at the other candidates in the race. How many of them sound like Ronald Reagan? Cruz certainly doesn’t. Clinton certainly doesn’t. Sanders certainly doesn’t. On both sides of the aisle, America is currently more Nixon ’68 than Kennedy’ ’60. Rubio, whatever mistakes he made, was not a good fit.I disagree that Cruz doesn’t sound like Reagan. Cruz doesn’t sound like Reagan in 1984, to be sure.

And a little more, before we get to the video of the famous speech at Moody Coliseum in Dallas on Halloween Night of that year from which so many famous lines came…

This is why I’ve always felt Marco Rubio was, hate to say it, a lightweight. Rather than give us the sharp critique that Reagan did in the opening 15 minutes of the above-linked appearance, he tended to just skip to the 4 minute closing.

Rubio’s uplift felt unearned to me. It also felt out of place: I do not know how any conservative can sit through 7 years of Obama, the endless recession, the endless wars which aren’t even being fought to win, but merely to appease Obama’s critics, the lies, the racial division, the increasing loss of America itself — and say you feel “optimistic.”

If you currently feel optimistic, and are smiling and laughing about the times we live in, then you’re not paying very close attention, and no, you’re not a good fit for the times.

But again, Reagan didn’t do that in 1980 either. America was a dark place in 1980, with 12% inflation and high unemployment and suffering humiliation and depredation abroad, and he said so. He painted a dark picture of America 1980, because America 1980 was in fact a dark place.

So to me, despite all the claims about Rubio’s “Reaganesque optimism,” i always thought his supporters were out to lunch. Sure, if Rubio won in 2016 and brought about 6.5% growth and low unemployment and a renewed American confidence, I’d say that by 2020, he’d earned the right to mount an optimistic Morning in America campaign.

But now? In some of the darkest years America has gone through since Watergate and Carter?

Now he wants to talk about all the Great Things We’ve Got Going On?

Talking about optimism and how good we’ve got it is the theme of a continuity campaign, of a re-election campaign. It’s not the theme of a change campaign, a campaign where you’re trying to boot one party out of office (and maybe also boot a permanent establishment class out of power as well).

This was the speech, and we’ll have a little commentary after the fact…

It’s not that Reagan’s 1980 campaign wasn’t a hopeful one. It was. Reagan had confidence in the American people and made a passionate case for why, if they were left alone, greatness would come.

But before offering that hopeful, or optimistic, if you will, message, Reagan delivered a blistering assault on the incompetence and mendacity of Jimmy Carter and the damage he was doing to the American people by regulating and taxing them into oblivion. The line about how Carter invented the “misery index” as a means to trash Gerald Ford’s economic record and claiming that anyone with a misery index above 12 shouldn’t dare run for re-election, and how Carter was sitting at a misery index of 20, was devastating.

Reagan used soft ridicule and gallows humor as a brutal indictment on Carter. How else would you describe the famous joke about how the former standard of American prosperity was two automobiles in every garage, but in 1980 both of those vehicles were Japanese and they were both out of gas? That was a level of ridicule befitting an insurgent candidate coming to dispatch a bad president deserving of an ouster; it wasn’t hopeful or optimistic. It was fire and brimstone.

It was anger. But anger focused and directed to solutions that Reagan was to provide. Solutions which by today’s standard would be considered fairly wonkish and perhaps even pie-in-the-sky.

The Halloween speech was more or less a culmination of a campaign that began at Liberty State Park along the Hudson River, in sight of the Statue of Liberty, in a speech that served as a scathing indictment of Jimmy Carter’s presidency. “The Carter record is a litany of despair, of broken promises, of sacred trusts abandoned and forgotten,” Reagan thundered. “Eight million. Eight million out of work. Inflation running at 18 percent in the first quarter of this year. Black unemployment at 14 percent, higher than any year since the government began keeping separate statistics. Four straight major deficits run up by Carter and his friends in Congress. The highest interest rates since the Civil War… Productivity falling for six straight quarters among the most productive people in the world.”

And on and on. It was a red-hot denunciation of Carter that put Donald Trump’s rhetoric to shame.

The public is dissatisfied with the performance of the federal government, and does not consent to be governed by it. It’s time for the Republican Party to prosecute that government for its incompetence, stupidity and disregard.

Trump is showing up with a less-articulate but nevertheless passionate indictment of the federal government’s performance. As is Cruz. Between them they’re pulling more than two-thirds of the vote in GOP primaries and soon that number will be close to 100 percent.

And the muckety-mucks in the party have been counseling positivity and optimism. Which is abjectly stupid advice. Anger and outrage – focused, smart anger and outrage – is what the times call for. Rubio had a bit of that in him, and at times showed some of it. But his terrible campaign strategists sold him on trying to be a Republican JFK, forgetting that in 1960 the American people were confident in the federal government rather than dissatisfied with it.

Frankly, we need less discussion of Reagan. We could use imitation of his communicative style and less reference to him. Nobody younger than 50 ever had the chance to vote for Reagan.

His message, though it needs to be dressed in modern garb, still resonates. Particularly the anger of 1980. That was mostly missing from Rubio’s campaign, and that absence killed him just as it killed Jeb Bush and so many others.

We don’t need positivity and optimism, like Ace noted. That can come after we win and turn the country around. What we need now is something that looks like Trump’s anger, but much more purposeful and articulate than he can give us.