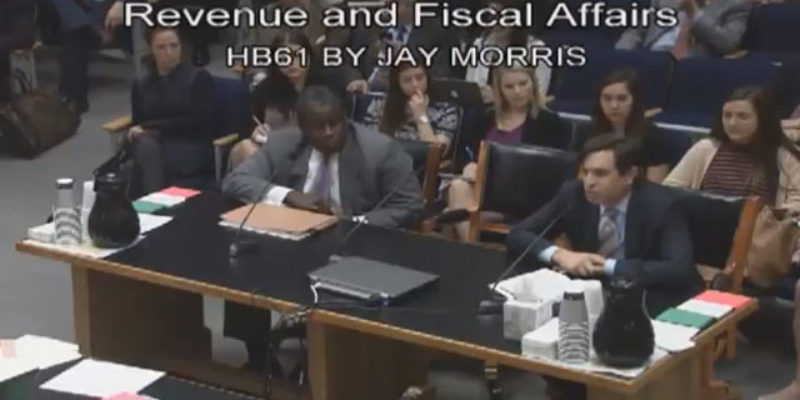 This comes from yesterday’s Senate Revenue and Fiscal Matters Committee at the Louisiana legislative special session, and it’s extremely instructive as to what the Democrat Left in Louisiana believes and how desperate they are to redistribute wealth and demonize those who produce it.

It’s questioning of Greg Bowser of the Louisiana Chemical Association and Stephen Waguespack of LABI on the question of sales taxes. Bowser and Waguespack are testifying against the amendments to a bill, HB 61 by Rep. Jay Morris, which would change that bill from eliminating sales tax exemptions on one penny of the state’s current four cent sales tax to eliminating them on all four pennies – which is what the committee (made up of seven Democrats and four Republicans) voted to do.

Bowser and Waguespack suggest that rather than “cleaning the pennies,” ostensibly in perpetuity and creating, effectively, a permanent tax increase on business in Louisiana in the midst of a state economy in recession, it’s a less-painful solution to just “increase the increase” of the sales tax from the additional cent passed in both houses in this session to 1.25 cents or some number deemed to resolve the outstanding short-term budget deficit, but in return for diminishing that increase over the next few years to (1) save taxpayers as much as $2 billion over the long haul compared to the five-year-at-one-penny increase the Senate previously passed and (2) force the legislature to make budget reforms that will streamline state government and impose a smaller burden on the state’s citizens, both corporate and individual.

And this perspective is not a popular one with the leftists on the committee, who clearly have two objectives they’re committed to achieving: first, that the state permanently increase the revenues available to it, and second, that business would pay for it. And they also demand that business sign on to this agenda – if this demand isn’t met, then they’re fairly well committed to demonizing those representatives of business who refuse to voice approval.

This goes 26 minutes, but it gets going quickly. Sen. Karen Carter Peterson (D-New Orleans), who runs the Louisiana Democrat Party, attacks both Bowser and Waguespack personally for expressing an opinion she doesn’t like, and continuously interrupts Waguespack by essentially calling him a liar for having worked in the Jindal administration. Then Sens. Troy Carter (D-New Orleans) and Jay Luneau (D-Alexandria) proceed to browbeat Waguespack for “not offering solutions” to the state’s budget problems, which is Democrat-speak for not proposing specific tax increases to business, and they’re not interested in listening to him when he notes that an extra increase in sales taxes is that very thing.

It’s a bit of a bizarre experience to watch the testimony, but if you have the time you’ll begin to understand how unreasonable these people are.

For its part, LABI’s Board of Directors responded to the donnybrook yesterday by putting out a statement with a much-different perspective than the one Peterson was barking at Bowser and Waguespack…

As the Louisiana legislative fiscal session enters its final hours, rhetoric from elected officials against the state’s employers has risen to an all-time high. In the light of personal attacks and inaccurate statements, the LABI Board of Directors is compelled to respond to set the record straight.

In less than one year, more than 20 pieces of legislation increasing the tax burden on business have been passed by the Legislature, or expected to pass by the close of the session tomorrow. These bills take a combined half a billion dollars out of the economy in 2016, more than $700 million in 2017, and more than $800 million in 2018.

These are real dollars from the residents of Louisiana that significantly affect the employers of this state and the employees and their families that depend on these businesses.

As the board of directors of the Louisiana Association of Business and Industry (LABI), we are proud to represent more than 2,000 small and large businesses representing every region and every industry across the state.

Over the past year, LABI has been at the table, seeking to offer solutions to state government. A three-part research series created by LABI, Budget Basics, contains two-dozen recommendations for how the state can solve the deficit in a comprehensive manner by addressing spending, revenue, and the structure of the budget itself.

Unfortunately, the session has largely focused on revenue generation with only a handful of items in the governor’s call applying to other means to resolve the problem.  For next year, officials frequently note that the goal is to fill the entire $2 billion deficit with new tax revenue. To address the mid-year deficit, $160 million in budget reductions are likely to pass as well as more than $400 million in one-time money. New revenue will likely make up $300 million to $400 million of the remaining deficit.

Meanwhile, no bills have gained traction in the session to un-dedicate statutorily protected funding for niche programs, transform expensive government programs, or address the fact that spending needs will grow every year for the next five years and that legislators must take steps to allow for prioritized spending.

In this fiscal session, recognizing the significant challenges facing the state and the critical services that should be funded, LABI made a deliberate choice to withdraw opposition from numerous pieces of legislation that will raise taxes on the employers of this state, including the signature item in Gov. Edwards’ legislative agenda – a 1 percent sales tax increase.

Businesses pay nearly half of the sales tax in Louisiana, including on the new tax increase. Business utilities will be taxed under this plan, even as individual necessities such as groceries, utilities, and drugs are not.

Only nine states in the country impose a sales tax on manufacturing machinery and only 14 states tax manufacturing utilities.  To quote the Tax Foundation: “This is not because businesses deserve special treatment under the tax code, but because applying the sales tax to business inputs results in multiple layers of taxation embedded in the price of goods once they reach final consumers.”

Of the $1.7 billion in corporate tax exemptions, more than half a billion dollars is the Sub-Chapter S Corporation exemption – an accounting mechanism that must exist to avoid double taxation. The second largest exemption is the $452 million credit for the reimbursement of inventory taxes paid to local government – a tax that penalizes investment and growth and is only collected in a handful of states.

With the removal of these two exemptions from the calculation, corporations are paying roughly half of corporate taxes and roughly half are exempt. This is nearly identical to the sales tax ratio of collections to exemptions and to the total collections vs. exemptions the state has chosen for individuals and businesses alike.

Exemptions have been necessary in Louisiana to overcome one of the highest corporate income tax rates in the country as well as the imposition of the franchise tax on top of that, which less than 20 states impose, but this administration and Legislature are attempting to expand.

It’s a disturbing fact that corporate collections are down at the mid-point of the fiscal year. Multiple tax amnesties and the 2015 tax changes imposed by the Legislature are certainly affecting those numbers, not to mention an economy that has lost 10,000 jobs in the past year. Still, the legislative economists predict corporate collections will be more than $350 million by the end of June.

Furthermore, Louisiana companies are continuing to pay state and local taxes on property, sales paid by business on goods and services used in production, severance, excise, and insurance. Other business taxes are also collected, such as unemployment insurance, individual tax on business income, and business and occupational licenses.

Despite some studies that show Louisiana’s incentives for economic development are very competitive, the tax code itself is rated very low by national experts. In 2016, the Tax Foundation ranked Louisiana’s corporate income tax rates, structure, brackets, base and credits at No. 38 of the 50 states. On the sales tax for business, Louisiana ranks dead last at No. 50 for the rate, the base and the complicated administrative burden.

LABI is proud to partner with chambers of commerce, trade associations and civic groups representing thousands of companies and hundreds of thousands of workers. Louisiana’s employers are doing our part to help solve the problem, and in fact, we are one of the only groups at the table with solutions. Local government, for example – the recipient of billions of state tax dollars annually – is largely absent from the conversation.

The state’s employers stand ready and willing to assist with the current financial crisis. We will share the burden to get through these challenging times because we care about this state, our employees, and the quality of life of our citizens.

We will continue to work toward solutions for the short and long-term, but we will not shy away from opposing taxes that will undeniably have a tremendous impact on the state’s economy and the jobs of thousands of people across this state. It is our right and duty as corporate citizens to share the truth with elected officials, even when it is not convenient. Even when we disagree, we are willing partners and hope the dialogue between elected officials and the state’s employers can continue in a respectful and conscientious manner.

The future of Louisiana is in our collective hands, and only working together can we move the state forward to a more prosperous tomorrow.