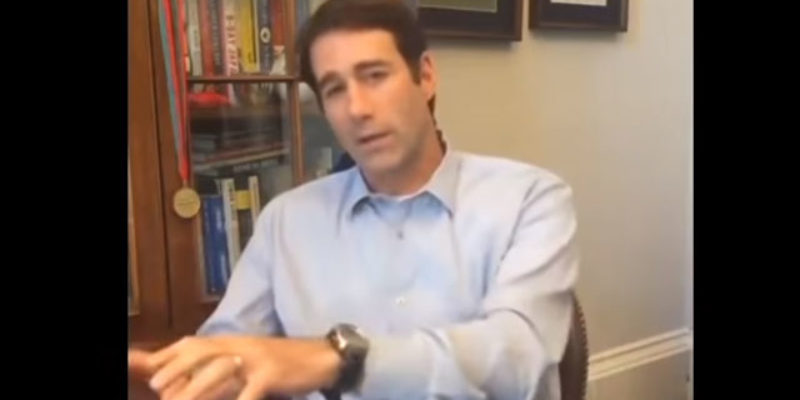 From Friday, in a video Facebook Q&A that he occasionally does (and we should post more of them, because they’re often pretty good)…

Graves’ take is fairly similar to the one I had in my American Spectator piece this week about the Puerto Rican debt bill, the gist of which is that both Graves and Rep. John Fleming, who had a post here at the site last night opposing the bill, are both correct in part – but the long and short of all this is Republicans are going to be made to suffer for Democrat misgovernance.

Essentially the bill, titled the Puerto Rico Oversight, Management, and Economic Stability Act (PROMESA), is a cramdown. It would put a commission together that would seek to force Puerto Rico to reform its fiscal policies — the island’s government is an avatar of Latin American leftist waste and corruption, particularly personified by its staggering $4 billion K-12 public education spending and thoroughly mismanaged government-monopoly power company. The bill would also impose a haircut on the bondholders by allowing Puerto Rico to access Chapter 9 municipal bankruptcy laws in large part. Several major Wall Street hedge funds helped accelerate the island’s debt crisis by snapping up $3.5 billion in bonds Puerto Rico floated in 2014, after its debt had been downgraded to junk status.

From a Republican perspective, the question is whether the cramdown favored by Ryan is a better option than the “let it burn” stand favored by Rep. John Fleming (R-Louisiana). In a Daily Signal piece last Friday, he warned that a debt restructuring for Puerto Rico will only pave the way for a similar debt default by irresponsible governments on the mainland.

Fleming’s take is very simple, very understandable, philosophically right, and probably the one Democrats are drooling over the prospect of the GOP adopting in an election year. Already, Hillary Clinton has called for more federal dollars to go to Puerto Rico through Medicare and Medicaid, supposedly to address inequities in funding for the island. No sooner does the GOP vote down a debt restructuring for Puerto Rico than her campaign, and the entire Democratic Party, will crank up the identity politics engine and call conservatives “racists” for failing to help Puerto Rico — as they promise to ride to the rescue with a full bailout.

Which is why Ryan is pushing the PROMESA bill. He wants to get the issue off the table so it isn’t used against his party in House and Senate elections, not to mention the presidential election, in the fall.

We mentioned in Friday’s Battlefield post that the ads hitting all over the country about how people need to oppose the “bailout” of Puerto Rico are being paid for by the bondholders, who it looks like might have bought off 60 Plus and the Center For Individual Freedom to engage in a bit of mercenary advocacy to kill the bill so they’re not forced to take a haircut in a Chapter 9 cramdown. That isn’t Fleming’s position; Fleming is saying that the bondholders ought to be on the hook if Puerto Rico defaults and that it’s not the American taxpayer’s problem – because Puerto Rico is only a test case for what’s to come…

Puerto Rico is on the verge of defaulting on its bonds because of mismanagement and corruption. Puerto Rico is in such bad shape that, as Reuters reported, its government has commandeered funds intended to pay bond-holders and instead used them to continue funding pensions. It’s a mess and now Puerto Rico is trying to hold us hostage for their mistakes. Two weeks ago, Puerto Rican lawmakers authorized its governor to stop payments on $72 billion in debt. Until they got word that Congress might bail them out, they had been working with their creditors on a voluntary deal. Now that they think Congress will save them, they are giving the stiff arm, refusing to pay anyone back. Make no mistake about it, this is government-sponsored extortion intended to force our hand.

We must draw a line in the sand against this now. The federal government is to let markets work, not be the ‘get out of jail free’ card for irresponsibility and corruption. And, just as important, we must lay a marker down for future requests that we all know will be coming – not from a commonwealth but from states likes California and Illinois that are on the path to bankruptcy themselves.

Like Puerto Rico, many states have legally guaranteed the payment of “full faith-and-credit” debt. So what happens when states simply cannot make a payment? Puerto Rico is the first test-case of this looming disaster. And, this test is coming faster than you think.

Essentially, if PROMESA passes, it means California and Illinois and several other states Democrats ran into the ground will be next up looking for relief from their creditors. Fleming isn’t wrong about that. But if PROMESA doesn’t pass, then it becomes a fight over whether the taxpayer gets to foot the whole bill on a true bailout.

I’m tempted to go with Fleming’s take on this rather than Graves’ – it’s the more ideologically pure position of the two. The problem is what comes next. Because if you don’t provide some sort of wiggle room for the Puerto Ricans, Democrat identity politics and Republican “racism” is going to be all you hear about. They’re salivating over the opportunity to bash the GOP in this cycle, no matter how stupid the narrative has to be in order to get there.

And they’ll have Wall Street, looking for an opportunity to screw the taxpayer and be made whole on ill-advised investments in Puerto Rican junk bonds, gleefully playing along.

At the end of the day there is no right answer here. All of the options are bad ones, and all of them carry political misfortune with them.

Because the Democrats and the Left have found a way to weaponize their inability to govern. They destroy the places where they rule, and then they find a way to blame Republicans for the failure.

You saw it with Flint and the way incompetent moron Democrats destroyed that city’s public fisc and subsequently the water supply before finding a way to blame the Republican governor for kids with lead poisoning. You’re about to see it when Puerto Rico’s debt crisis becomes Puerto Rico’s humanitarian crisis. Don’t be surprised, should PROMESA move out of that House committee, if the Democrats come in with a host of poison-pill conditions to bust the bill and kill it; the Democrats know they won’t be blamed for half-naked starving Puerto Rican kids in the streets of San Juan or boatloads of refugees arriving in West Palm Beach. That’ll be Paul Ryan’s problem this fall, or Ted Cruz’ – and “they don’t care about brown people.”

It’s coming. Pass PROMESA, or don’t. But the real stakes will come when it’s a question of whether the leftists who run Puerto Rico are confronted with their failure. It’s going to take an iron political stomach to make that happen.