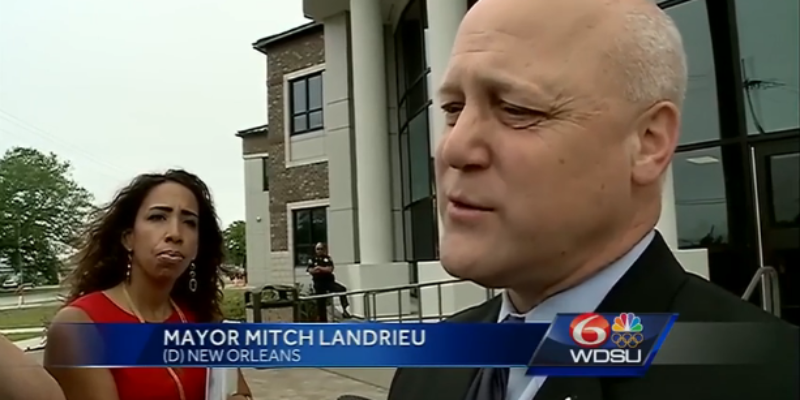 During a speech on violence in the crime-ridden city of New Orleans, Mayor Mitch Landrieu chastised voters for rejecting taxes increases pushed by his administration to pay for more New Orleans Police Department (NOPD) efforts.

The proposal by Landrieu included a massive $26.6 million property tax hike to apparently help pay for more police funding for the NOPD and it would also help pay back a decades-long court settlement between the city and New Orleans firefighters.

But, earlier this month, voters largely voted down the tax increase proposals, prompting this response from Landrieu last night during a speech on violent crime.

“You can’t get more with less; you get less with less,” Landrieu said of voters rejecting the tax increases.

That speech also included a long list of names of New Orleans residents who have been killed recently due to the city’s uptick in violent crime, which Landrieu said is something he thinks about everyday.

Landrieu’s speech was a much needed reaction by the mayor for residents who feel as though the city attempts to downplay the crime issue in order to avoid hurting tourism.

“I am an eyewitness to the agony that families go through when they lose their children to violence, and I’m compelled to testify to what I see and what I know,” Landrieu told the crowd at Tulane University. “We are a city, we are a country that is drunk on violence, and we need to wake up to this fact.”

Landrieu’s approach to crime, though, may come with push-back from conservative residents and even gun-loving democrats, as he has proposed a number of local gun restrictions that mimic state and federal law.

The address on violent crime comes after former Saints football player Will Smith was murdered in a fender-bender accident in the Lower Garden District, as well as comments from Saints head-coach Sean Payton who called New Orleans the “wild, wild west” when it comes to crime.

After Payton’s comments, Landrieu said Smith’s death was not indicative of crime in the city.

Interested in more news from Louisiana? We've got you covered! See More Louisiana News
Previous Article New Poll Has Some Surprising Results About Louisiana’s View On Marijuana
Next Article Mitch Landrieu Touts Fixing NOLA Pot-Holes, But Are They REALLY Getting Filled? Send Us Your Pot-Hole Pics!