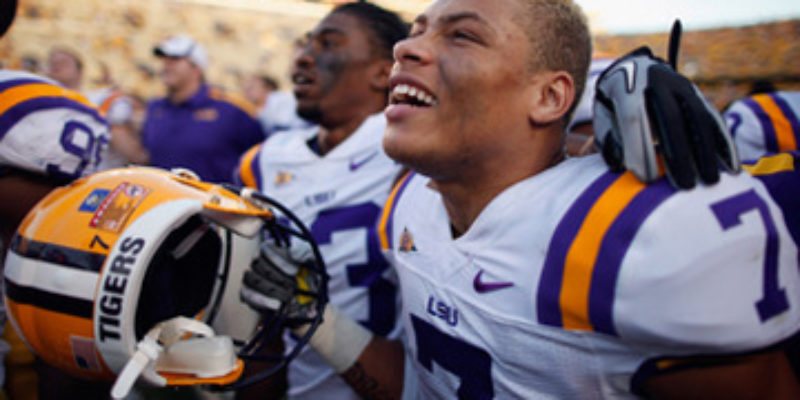 In the wake of the tragic murder of former New Orleans Saints player Will Smith, the NFL community has been weighing in. Among those were New Orleans native and former LSU and current Arizona Cardinals player Tyrann Mathieu and New Orleans Saints Head Coach Sean Payton. Their perspectives could not be any different.

Mathieu went on Fox Sports radio on Sunday and talked about the lack of opportunities New Orleans kids have. He says that the culture of New Orleans is one that encourages violence, drug use, and gangs. Mathieu says kids don’t have the educational or recreational opportunities and most simply cannot escape the cycle of violence and poverty.

Mathieu also rattled off some statistics about how many kids in New Orleans schools had at least one parent in prison. One of the most heartbreaking segments of the interview was when Mathieu says he cannot stay in New Orleans for very long because he finds the city depressing. It’s a very good interview, we definitely recommend listening to all of it.

What’s Mathieu’s solution? Mathieu wants to refocus the priorities of the city of New Orleans to bring back recreational programs and give kids alternatives to the gang culture. He’s on the right track.

Contrast this to what Sean Payton had to say. Payton gave an interview with USA Today where he spent much of it talking about how much he hates guns and he would get rid of them completely. Here’s what he had to say:

“It was a large caliber gun. A .45,” Payton said. “It was designed back during World War I. And this thing just stops people. It will kill someone within four or five seconds after they are struck. You bleed out. After the first shot (that struck Smith’s torso), he took three more in his back.”

Payton paused, then continued with his theme.

“We could go online and get 10 of them, and have them shipped to our house tomorrow,” he said. “I don’t believe that was the intention when they allowed for the right for citizens to bear arms.”

Of course this is nonsense. Any bullet can kill in four or five seconds if it hits the right spot. There’s nothing about the .45 that makes it more dangerous than any other pistol round.

As someone who has bought guns online, Payton is completely off base on how it works. I still had to go through a background check and the gun was shipped to another dealer who did the transfer.

The Obama administration even thought Payton’s anti-gun rant was a bit nutty.

If you contrast the two interviews, they paint a different picture of New Orleans. Mathieu describes a culture that is broken. A city that has been decimated by welfare, poor priorities, the Drug War, a failed criminal justice system, and gang culture. It doesn’t matter if this broken culture and city have guns or not. The solution will only come with cultural change.

Meanwhile Sean Payton, who spends a lot of time in Dallas, is more focused on the tool used. Which man truly gets it?

My guess is that the guy who gets it is the New Orleans native and how was lucky enough to escape the city’s violent culture and not the guy who spends his time in Dallas.