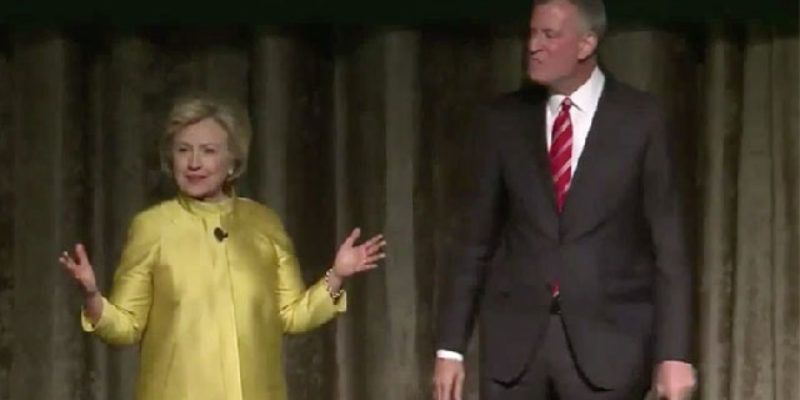 For all the yammering and recriminations going on amid the Republican presidential contest, there simply hasn’t been enough attention paid to how absolutely pathetic the Democrat frontrunner is.

Hillary Clinton loses practically every primary contest she runs in to Bernie Sanders, but is nonetheless assured of the nomination thanks to the patronage-seeking superdelegates on the Democrat side who support her even if their home-state voters do not.

She’ll beat Sanders in New York, which is the unquestioned capitol of patronage-seeking Democrat pols, but probably not by an overly convincing margin. And her campaign in her adopted home state has been little short of awful – which is to say that it’s been what it’s always been.

Take that stilted, headache-inducing performance at the Inner Circle gala – the annual New York event at which the outrageous skits put on by prominent politicians are usually the highlight of the political year on the East Coast. It was at Inner Circle, for example, that Rudy Giuliani showed up in drag – a little too convincingly, actually – as Rudia and ultimately trashed the presidential bid that would come nine years later. The New York newspaper reporters who put on the Inner Circle show famously lampooned then-governor Eliot Spitzer with a rendition of “Love Client No. 9.”

And this year, there was this…

You can’t get worse than that, on all kinds of levels.

First is the abject lack of talent on hand between Hillary and New York’s bungling Communist mayor Bill DeBlasio. There isn’t an ounce of human personality in either, so having them vomit attemptedly comedic lines at each other is a fool’s errand in the first place.

And second is the unabashed racism inherent in DeBlasio, whose wife is black, excusing his late endorsement of Clinton by saying he’s on “CP time,” which as any culturally literate American aged 40 or older knows, is “colored people time” – meaning that he moves slowly and lazily.

Is DeBlasio a racist? Of course he is, but not in the manner the Left usually accuses people who disagree with them of being. DeBlasio’s constant pandering to racial minorities, best exemplified in his order to the NYPD to step down its presence at last year’s J’Ouvert festival of West Indian culture in Brooklyn last year which directly led to a shooting that destroyed the life of one of Gov. Andrew Cuomo’s staffers, is the very definition of what George W. Bush called the “soft bigotry of low expectations,” and it sums up his entire political identity. He coddles racial minorities because he doesn’t think they’re capable of succeeding without his help.

And that’s why he thought it was OK to be caught out in public talking about being on colored people time. The wife and kids have to be really proud.

There’s the sense of entitlement associated with Democrats like DeBlasio and Clinton who believe they’re immune to outrage from the politically correct crowd and can therefore express overt racism, regardless of how funny it’s supposed to be (delivered like that, we can all agree it’s hopeless), and yet get away with it.

And there’s the tone-deafness of Hillary, first to appear on stage in such a disaster with little to no apparent benefit (why would she even want DeBlasio’s endorsement given his unpopularity and the rich vein of out-of-the-mainstream political identity he offers in a general election setting?) and then to attempt to extricate herself from the mess she made.

Amid a firestorm of criticism from black community leaders, Hillary Clinton distanced herself Tuesday from a skit with Mayor de Blasio that included a tone-deaf racial joke about “ CP time.”

“Well, look, it was Mayor de Blasio’s skit,” Clinton said in an interview with Cosmopolitan.com.

“He has addressed it, and I will really defer to him because it is something that he’s already talked about.”

DeBlasio “addressed it,” all right. He said everybody ought to lighten up. Who thinks that’s going to put this to bed?

Is it a good thing that this society has become so joyless and tight-assed that a relatively mild cultural jab like “colored people time” would become a major kerfuffle? Of course not. We’ve had decades or more of jokes about drunken Irish and Scotsmen, for example, without any lasting civic damage; the social justice warriors could give it a break without it killing us.

But these are the social justice warriors. It’s their own petard they’re being hoisted on. And the unmitigated idiocy of such an own goal, and the inability to give a simple, effortless statement like “this was a joke, it wasn’t intended to upset anybody, I’m sorry if it did” rather than to now engage in blamecasting, perfectly encapsulates Hillary Clinton.

And why, regardless of what the polls say now, a competent Republican campaign this fall will dispatch her easily.