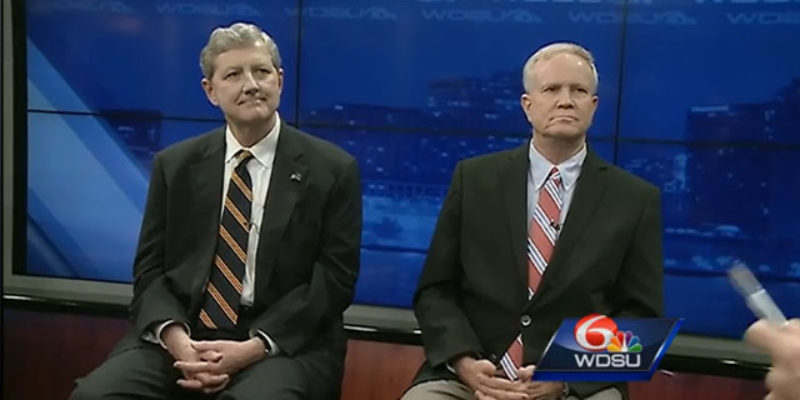 This comes from WDSU in New Orleans earlier today, and it’s a pretty good 15-minute discussion of the TOPS program and why it’s in the state it’s in – wherein Gov. John Bel Edwards is proposing to hack the program’s budget by $180 million, leaving it as little more than a shell of its current size, unless he gets the better part of a billion dollars more in new taxes in a second special session to start after the current session is over.

John Kennedy, Louisiana’s treasurer, says Edwards’ threats are empty and little more than scare tactics. He doesn’t come out and say Edwards’ numbers are bogus, but he certainly makes a strong implication that’s the case. He notes that the legislature has passed more than $2 billion in new taxes in the past 12 months and that Louisiana’s got more money coming in now than at any time in the state’s history save for the post-Katrina overinflated boom years.

State Sen. Conrad Appel takes a position somewhat similar to Kennedy but a bit less bombastic, noting that TOPS has gotten more expensive than it was projected to be largely because of tuition increases that mandated higher per-student costs and also because of increasing scholastic achievement on the part of Louisiana’s high school kids which qualifies more of them for the award. Appel agrees that the state’s budget problems are not as severe as Edwards has presented them to be and that the legislature will come up with a solution to TOPS long before Edwards can gut the program.

But it’s interesting, because while the two say a lot of the same things you don’t get the vibe that they agree with each other all that much. Part of that is a dynamic that’s pretty similar to the one we see with Kennedy on the campaign trail – namely, that while there isn’t much difference in ideology between him and the two Republican congressmen in the race, he’s managed to significantly irritate John Fleming and Charles Boustany by taking shots at the worth of Congress. “I hear there are lots of good people in Congress,” Kennedy’s standard stump speech, given even with Fleming and Boustany in attendance, goes. “I just don’t know what they’re good for.”

Fleming and Boustany can’t stand that line and both call it grandstanding and irresponsible. And Kennedy does something similar with Appel as a member of the legislature by continuously dumping on its work. Appel’s in the legislature, so naturally he bristles a bit at the implication the work he’s doing is no good. And as such, there’s only qualified agreement on a subject there isn’t that much difference between the two on.

It’s a fascinating look into not only the policy issues, which are fundamental to the state’s future, but the personalities of the two men – one a potential U.S. Senator in a year’s time and another one of the more respected members of the legislature.

Interested in more news from Louisiana? We've got you covered! See More Louisiana News
Previous Article If You Haven’t Seen What Steven Crowder Just Did To The “I’m Just A Bill” Schoolhouse Rock Cartoon…
Next Article Lafayette Parish Schools May Soon Allow Students To SIT DOWN And NOT Say ‘Pledge of Allegiance’