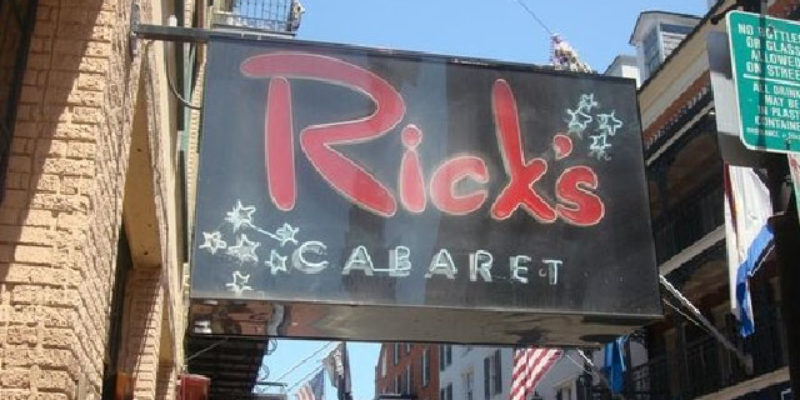 Michael Berry was practically losing his mind over this bill yesterday afternoon on the radio, and he’s correct in disparaging it.

Colossal waste of time, and for no productive purpose. Naturally it passed out of committee.

State lawmakers are eyeing a proposal that would keep 18- to 20-year-olds from stripping in adult entertainment venues in Louisiana.

The proposal, which would lift the age requirement set by state law from 18 years old, won overwhelming support in a Senate Judiciary Committee on Tuesday and now goes to the full Senate. It hasn’t yet made its way through the House for consideration.

An exotic dancer, former dancer and club owner from New Orleans all raised objections during the hearing on the bill Tuesday, though the city recently adopted an ordinance with the new age restriction.

Kendra Bogner, a dancer at Rick’s Cabaret on Bourbon Street, said she began dancing to support her daughter.

“It will affect young moms,” she said. “It’s nothing like what people think.”

“Many of these women who are abducted end up in these establishments — that’s a fact,” said Sen. Ronnie Johns, a Lake Charles Republican sponsoring Senate Bill 191. “We’d like to protect these young women.”

Debate in New Orleans was largely driven by a push that began last summer after a 19-year-old dancer was found dead on the interstate. “This bill will bring that into a statewide statute,” Johns said.

People who are 18-20 would still be able to work other jobs in strip clubs but could no longer work as dancers “clothed in a manner so as to expose the genitals, pubic hair, anus, vulva, or female breast nipples below the areola in the licensed premises.”

Jim Kelly, executive director of Covenant House, a safe haven for at-risk youth in New Orleans, said he sees it as an issue of protecting teens who may have limited options and be more vulnerable to human trafficking.

“It’s personal for me because I know the young people who have been caught up in strip joints and human trafficking,” Kelly said. “If you have to be 21 to drink in one of these establishments, we believe you should be 21 to take your clothes off there.”

The incident in question in New Orleans involved a stripper at a Bourbon Street club, to be sure, but investigators believe it was her pimp who killed her and left her on the roadside.

Strippers – some strippers, to be more precise – may also be prostitutes, but prostitution is not part of the job description of a stripper. Those are two separate jobs. And prostitution is illegal in Louisiana regardless of how old you are. Stripping is not. The dead 19 year old in New Orleans got that way because of prostitution, not stripping.

It is not an endorsement of pornographic dancing to recognize that if it’s a legal activity, people who are legally adults have the right to pursue it. If Ronnie Johns wants to keep 19-year olds from involving themselves in that life, we’ll congratulate him for doing the Lord’s work should he give his time and/or money to organizations like Covenant House to convince them not to go down that unstable and immoral road.

But Louisiana has enough restrictions on trade on its books. Leave the strippers alone.

Interested in more news from Louisiana? We've got you covered! See More Louisiana News
Previous Article HOLTON: The Major Media Is Missing Something Crucial In American Politics
Next Article The Red Bayou Show, Episode 41 – The Attack On School Choice In Louisiana