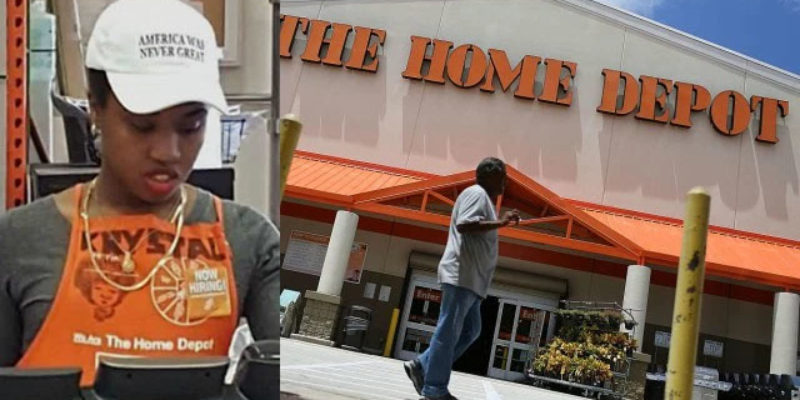 It is sad that so many of our young people today are clueless about our country’s distinguished history. In a troubling story this week that generated national headlines, a 22-year-old Home Depot employee, Krystal Lake of Staten Island, New York was pictured at work wearing a hat that read, “America Was Never Great.”

The disturbing image sparked an explosion of online comments from across the nation with people expressing both support and opposition to her political message. A Home Depot spokesman responded to the controversy by claiming that her hat was in violation of their company policy and that “no one on our management team saw her wearing the hat, otherwise they would have had her remove it immediately.”

The real reason for Lake’s hat was to show opposition to Donald Trump, who has made the slogan “Make America Great Again,” a major part of his campaign. Lake wore the hat to “send a message” that America’s greatness was “a lie.”

In an interview with the Staten Island Advance, Lake said that she does not like Trump because he will “automatically write you off” if you are not in a favored group, presumably white males. Without citing any evidence or providing any examples, Lake claims that Trump “caters to one type of group of people and disregards everyone else.” This is probably a major surprise to the many minority employees of the Trump Organization.

Lake revealed that she is a supporter of Vermont Senator Bernie Sanders (D-Vermont), which should shock no one. Sanders also holds a pessimistic view of America and believes the only way we can be great is for government to pay for everyone’s healthcare costs and college tuition. To pay for this massive government expansion, Sanders wants to target the “top 1%” and make “Wall Street” accountable.

While Lake wants to believe nonsense from Bernie Sanders, she refuses to believe that her country has a proud history. She needs to learn that we were blessed with brilliant Founding Fathers who drafted a U.S. Constitution and Bill of Rights which guarantee freedoms that are only dreamed of in many nations.

Her country is the one that defeated Imperial Japan and Nazism in World War II and saved the world from tyranny. Amazingly, we rebuilt Germany and Japan after the war and continue to provide them with military protection today.

This wonderful country is the only that paved the way for space exploration and was the first one to land a man on the moon. Our scientists have developed vaccines for deadly diseases and continue to pioneer the latest advancements in medical research.

Under Ronald Reagan’s leadership, the United States of America brought down the Iron Curtain and relegated Soviet communism to the dustbin of history. In the process, we freed millions of people from the grips of an evil ideology.

In any natural disaster or terrorist incident, the United States of America is always the first country to show support through government aid and private donations. Our government provides more foreign aid than any other country and the American people are the most generous in the world, helping those suffering from disaster, famine or disease. Whenever there is a tragedy, the world can count on Americans to volunteer their time and donate their hard earned money to support those in need both at home and abroad.

Unlike other countries, the United States does not look to occupy foreign lands. For example, in the first Gulf War, we expelled Saddam Hussein’s Iraqi army from Kuwait, but did not conquer that country. We accomplished our mission and came home.

During the “war on terror,” our taxpayers have spent trillions of dollars rebuilding both Iraq and Afghanistan, while fighting jihadists who hate freedom and want to impose a barbaric caliphate on the world.

While our “nation building” has gone astray and our troops have remained in the region too long, our aims to spread democracy have been noble. The problem is that the “war on terror” has failed to defeat militant jihadism, while the country has paid a tremendous price in the thousands of Americans killed and the hundreds of thousand wounded, many with very serious injuries.

Thus, if elected President, Donald Trump wants to focus on our problems in this country, such as a poor economy, an open border, crumbling infrastructure, etc. He wants to renegotiate poor trade deals and military alliances so that Americans are no longer abused.

It is time to “Make America Great Again,” but we can only do that by changing course, not pursuing more socialism such as the policies advocated by Bernie Sanders.

Sadly, Ms. Lake is unaware of our proud history and what needs to be done to restore our country’s greatness. She does not appreciate our many freedoms and American exceptionalism.

To truly understand our uniqueness, she should visit some foreign countries and see how we compare. Without question, we have the greatest people in the world, and in 2016, it is time we elected the type of political leadership that is worthy of our country.