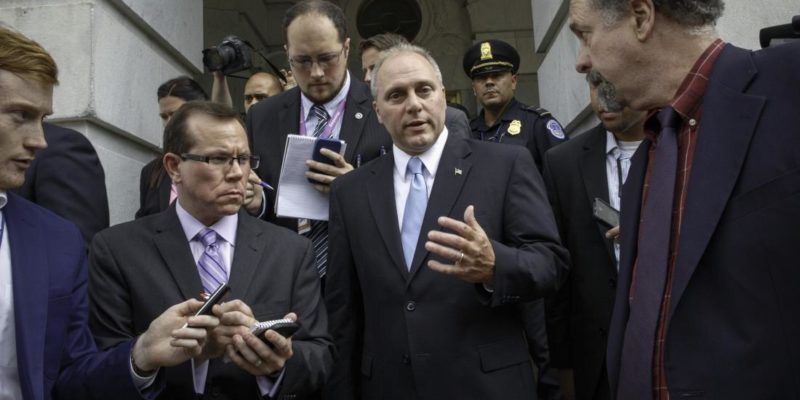 After the Hayride reported how House Majority Whip Steve Scalise (R-LA) joined GOP House leadership to block an amendment that would have made it illegal for illegal immigrants to serve in the military, based on a NumbersUSA report, his spokesman says that’s not the case.

The NumbersUSA report said that Scalise broke from Rep. John Fleming (R-LA) and Rep. Garrett Graves (R-LA) (who co-sponsored the amendment), as the House leadership “typically directs the House Rules Committee’s actions,” where the amendment was killed.

But, a spokesman for Scalise says that’s not true.

“Scalise has no control over what amendments the Rules Committee make in order,” a spokesman said. “That process is controlled by Rep. Pete Sessions (R-TX), the Chairman of that committee.”

The National Defense Authorization Act (NDAA) would have blocked illegal immigrants from enlisting in the military. The amendment would have restricted the enlistment into the military to simply immigrants who were in the country legally, who entered legally.

Scalise’s spokesman said the Louisiana conservative actually built support for a similar amendment last year, citing that he would have done the same had the amendment been made in order by House Rules Committee.

Editor’s Note: This report previously stated that Steve Scalise helped block an amendment to keep illegal immigrants out of the military, based on a NumbersUSA report. However, after Scalise’s spokesperson contacted the Hayride, we have concluded that to be mostly untrue.

Interested in more national news? We've got you covered! See More National News
Previous Article Has Bob Mann Forgotten About The Fiscal Hawks?
Next Article CROUERE: (She) Don’t Know Much About History