We all like Clay Higgins, the “Cajun John Wayne” who made himself a YouTube celebrity as the St. Landry Parish sheriff’s deputy in charge of making videos for the Crimestoppers program airing as a segment on local TV news.

But Higgins is going to announce this week that he’s running for Congress, and we find that unfortunate.

We find it unfortunate because Higgins has made himself into a celebrity for a reason – he was the voice of law enforcement speaking the truth both to criminals and to an increasingly lawless and immoral culture, and the reason for his celebrity was not only that he was good at it but also because he filled a void – there aren’t enough charismatic cultural figures defending civil society and the rule of law from the insanity that emanates from Hollywood. Higgins resonated with people because it really isn’t too much to ask that you don’t steal things, or that you treat your neighbor’s life, health and property with respect, or that you refrain where possible from polluting yourself with booze and drugs – or at least not seek to enrich yourself enabling others to pollute themselves.

Higgins had a platform to call out the people responsible for making things worse for the rest of us and he was a hit because he used that platform in an entertaining and novel way. That had merit in its own right.

Naturally, when it became political that platform was taken away from him. The sheriff in St. Landry didn’t want a problem with the black community, and the local race hustlers didn’t like it when Higgins went after a local gang that probably has a few too many ties with the more “upstanding” members of their operations, and while his videos were a big hit with the TV viewers in the Lafayette market they all of a sudden became a liability for the sheriff.

So sure, the response to losing your job via politics is to fight back via politics. We get it. We’ve seen it over and over again.

We’re just not sure it’s a good thing, because what we’ve seen over and over again is “celebrities” and cultural figures popular on the Right rushing to politics at the first opportunity they can. And in most cases what we’ve found is they’re a dumpster fire – sooner or later they end up little more than hucksters looking for publicity rather than actually accomplishing anything of value. Sarah Palin, as much as we thought she was a breath of fresh air in 2008, is a dumpster fire. The Duck Dynasty people have been a dumpster fire in politics so far – have they endorsed anybody who won other than the humiliating Vance McAllister? Ted Nugent is a dumpster fire. Sammy Kershaw was a dumpster fire.

And Clay Higgins is starting to look like a dumpster fire before he even gets started running for Congress. This appeared at the Advocate late last week…

As a young man in the 1990s, his wife accused Higgins in court of threatening her. He said it was time of turmoil, one of those times he refers to in videos. But he’s sure he never did what his ex-wife alleged in court records.

“He had put a gun to my head before, during an argument,” Eloisa Rovati Higgins said in a June 1991 handwritten petition seeking a protective order, which was granted by the Family Court in East Baton Rouge Parish.

“He threatened that if I ever came near the house he would shoot me,” she wrote.

Higgins told The Advocate Thursday that he hadn’t read the court documents, but said he would never do that — “there was no violence in our relationship, ever” — and that he still loves his former wife, despite the divorce. She has since died, he said.

The divorce that ended their seven-year marriage, in which Higgins’ alleged adultery was the ground cited, was finalized on Sept. 11, 1991.

These episodes took place during the stressful months after the couple’s six-month-old daughter died.

“We were crushed, as human beings, by the death of our little girl,” Higgins said, adding that he still celebrates Daniela Michelle’s birthday.

“For the only time in my life, I was not strong enough as a man for myself and my wife. And I can never forgive myself because I just didn’t have the strength to survive myself and pull her through,” Higgins said.

“I spent the first 40 years of my life trying to assassinate my own character, but was incapable because God had another plan for me,” Higgins said. He turns 55 in August, according to court records.

Higgins said politicians dredging up hurtful issues from the past — and newspapers reporting them — is what’s wrong with politics in the country. He plans to announce his political intentions on Wednesday.
He’s either running for the Lafayette/Lake Charles-based Third Congressional seat or for the U.S. Senate, both seats are open in the November election.

“I will go to Washington D.C. representing the real Americans and the real Acadiana,” Higgins told KLAF-TV in Lafayette earlier this week.

And attention-seekers running for office who lack the character and judgement to govern responsibly make it worse virtually every time.

Is Higgins one of those? We hope not. But he sure does seem to fit a pattern that we’ve seen too often to wish a reprise for.

What would have made us happy would have been for Clay Higgins to continue as a cultural figure. Maybe on a TV show. Maybe as a radio host. Maybe even in the movies. Having him rush off to run for Congress only politicizes the culture more – and to the detriment of conservatism. Higgins is going to be written off for his marital trouble and he’ll be painted as a hypocrite. We’d sympathize with the response that isn’t a fair characterization of him, but the point is he knew what was in those court records and he knew that he’d created a demand for himself in the venue within which he’d found success.

Now his campaign is going to be a sideshow, and it’s going to detract from the 3rd District race.

Scott Angelle isn’t the only qualified candidate in that race. There are three successful businessmen and a former ambassador also running. Higgins and his baggage will suck the oxygen out of those challengers before the public even gets to evaluate them, and voters in the 3rd District might well end up losing a chance to find someone they like as an alternative to Angelle.

Of course, Higgins could run as a Democrat and then his marital history would be meaningless. It’s assumed that a Democrat in politics has no concept of being a faithful spouse. And as a Democrat Higgins might find allegiance from the very liberals and race hustlers who put him out of a job in St. Landry.

We’ve got good news. Have you seen oil prices? They’re creeping back up to something that can sustain life in Louisiana’s oil patch. 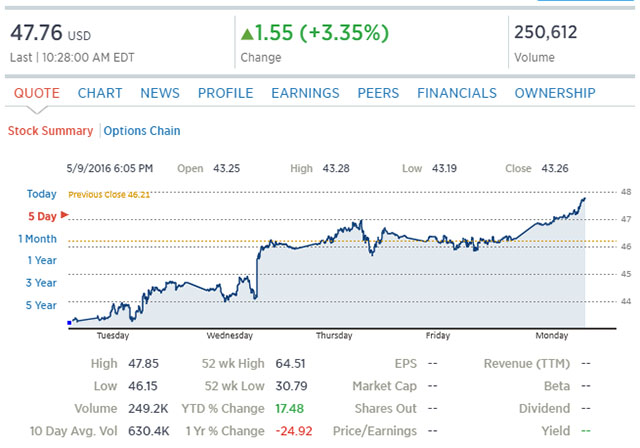 >Obviously that’s a big deal, though you really want that WTI price to climb into the 60’s and stay there for a while in order to really bring the oil industry back to life in the state. But when you consider oil at $48 compared to oil at $30, where it was not long ago for quite a while, $48 looks pretty good.

We were told that Louisiana’s current budget pegs oil prices at $38, and the rule for the state’s budget supposedly goes that Louisiana makes $12 million for every dollar increase in the price of oil. So this would mean the state has $120 million more to work with than expected.

Ready for a Today’s Last Thing?

It’s a Game Of Thrones last thing. If you’re not up on Game Of Thrones you probably ought not watch it. But if you are you’ll get a kick out of this – it’s Kit Harrington, who plays Jon Snow, on with Jimmy Fallon talking about how he had to keep the secret of his character’s fate, and how difficult that was to do…