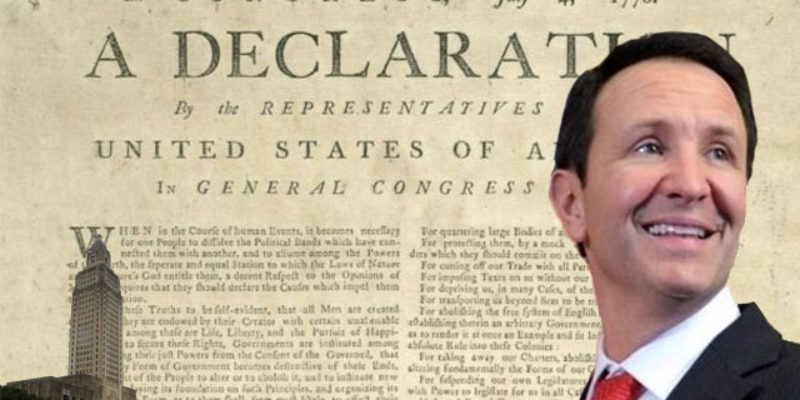 We talked about this a little in this morning’s Hither And Yon post, but the passage of HB 105 with a 17-6 vote in the House Appropriations Committee has lit up no small degree of outrage among the state’s Democrats and Gov. John Bel Edwards’ allies in particular.

Here’s a Facebook post from Rebuild Louisiana, which is a group put together to serve as social-media surrogates for Edwards – Al Gore’s term, if we remember it correctly, was “digital brownshirts”…

It’s ironic that they’re calling it the “Jindal Caucus,” because the same people were howling during the previous administration when the governor responded to complaints by other statewide officials – notably Jay Dardenne and John Kennedy – by slashing their budgets.

What HB 105 does is to create a separate budget item for the Department of Justice, as in the Attorney General’s office, so that the same thing can’t be done by Edwards against Jeff Landry. We’ve already seen a good deal of friction between the two, as Landry has embarked on a number of projects independent of the governor and in some cases contrary to his political wishes. That’s entirely likely to continue, if not intensify, and having Edwards’ Division of Administration which is headed by Dardenne (who naturally and with no particular appreciation for irony railed against this move in the committee hearing this morning) in a position to choke Landry out with the purse strings is something the Republican House members can see coming a mile away and would like to pre-empt.

From the standpoint of having an independent attorney general, that’s a solid policy objective, which is why three-quarters of the House Appropriations Committee backed it. They recognize Landry and Edwards are going to rumble, and they’re trying to give Landry the ability to carry out his side of the argument without being throttled by the governor. These are the same people who beat back his attempts to impose a Democrat House Speaker on a Republican House, so they perfectly recognize what’s coming.

The unfortunate thing about this fight is that it’s a doomed one. Edwards threatened to hit it with a line-item veto, which would actually be a great lever for him. Namely, the budget passes and he vetoes the independent funding for the AG’s department while calling for a special session immediately after sine die for the current session in order to raise taxes and resolve the budget deficit he claims the state will have, and the House Republicans who have been most vociferous in opposing that special session will be faced with having been responsible for allocating zero funds for Landry’s office now that Edwards vetoed those funds as appropriated outside the Division of Administration. They’ll have no choice but to accept the special session and appropriate funds for Landry at that time.

That’s if it even gets as far as the governor’s desk, which we doubt. The guess here is the bill will clear the House floor, but once it gets to the Senate Landry’s funding will go right back through the Division of Administration – because, as we noted in the Hither And Yon post this morning, John Bel Edwards gets from John Alario that which he asks from John Alario and nothing less.

Still, it’s a worthwhile fight to have even if it’s a losing one – because once that fight is lost and Edwards does end up slashing Landry’s funding in retaliation for his acting independently on this issue or that, it will be known to everyone what has occurred. There will be no hiding the fact the governor is playing politics with the AG’s ability to do his job, because – as the legislators will be able to point out – they saw it coming and they acted to stop it from happening, and didn’t have the power to succeed.

And that will be one more issue to chalk up for discussion when Edwards comes up for re-election against a field of Republican challengers which may or may not include Landry in 2019.

Interested in more news from Louisiana? We've got you covered! See More Louisiana News
Previous Article POLL: Trump Trounces Hillary In Louisiana With Independents, Democrats And Women
Next Article PRAGER U: Be A Man, Get Married