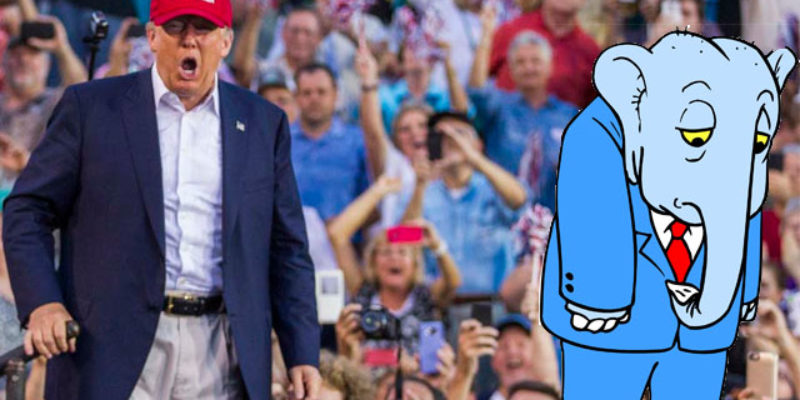 …as a statement of what we would get were he elected president.

The 11 judges on that list are all very good. I understand Trump’s people got input from the Heritage Foundation and even National Review in putting the list together.

But there is absolutely nothing Donald Trump says which can be counted on. He has proven that time and time again.

Trump’s tax plan was nowhere near as pro-growth or as sensible as Ted Cruz’ tax plan. But it at least conformed to correct market principles and was designed, seemingly, to encourage a more competitive pro-growth economy that would put people to work. And then Trump defaced that tax plan, if not completely debauching it, by suggesting that contra his plan he was for having top tax rates higher than what he put on paper.

Trump’s immigration plan, which his fans think is that he builds a wall and makes Mexico pay for it and then runs all the illegals out of the country, plus he bans all the Muslims from coming in, is really more of a suggestion, he now says. He’s always been for touchback amnesty, which is amnesty but with the addition of setting billions of dollars on fire by wastefully deporting millions of people he’s just going to let back in, and now he’s talking about taking refugees from Syria.

“I thought what I would do is put this forward and this would be the list that I would either choose from or pick people very close in terms of the spirit and the meaning of what they represent,” the presumptive Republican presidential nominee said in an hour-long interview with Fox News’ Sean Hannity.

“We’re either going to choose from this list or people very close to it,” he said. “At a minimum, we will keep people from this general realm.”

Trump claimed that “outside of the defense of our country,” filling vacancies on the high court will likely be the “single most important thing” the next U.S. president must do while in office.

And who would be the judge of that? Trump, of course.

When you release the list, you are telling people they can bind you to the list. Trump does that, and he does it because he’s told that if he wants to get conservatives who don’t like him to vote for him he has to offer them a reason to support him.

Which is common sense. It’s basic intelligence. You tell people “vote for me, and this is what I will do for you on the Supreme Court, and my people will be vastly superior to Hillary Clinton’s people, and that alone makes it worth your while not to vote Libertarian, or some other third party, or to stay home, or even to vote for Hillary.” And if they believe you, then what you’ve done helps you.

But when you have zero credibility because nothing you say lasts very long as your position and people recognize you’re not a principled person, when you release the list you have to stick to the list. Producing the list tells people who don’t like you and don’t want to vote for you even though they would normally vote for someone with an “R” by his name that they can choose to vote for the list rather than the candidate.

That was the point of John McCain taking the plunge and nominating Sarah Palin as his running mate. Palin attracted a lot of anti-establishment conservative support because she wasn’t a Washington suit. She turned out to be more or less exactly what her critics claimed she was, but had McCain not picked her he would likely have been beaten far worse by Barack Obama in 2008 because many in his own party couldn’t stand him – but she was a decent pretext for their vote.

Trump is very much McCain, but he’s got bigger problems than McCain did. So he needs that list and he needs to be able to run on it with conservatives.

And yet, he repudiates the list as though he’s not bound by it. So for people who find the list interesting and Trump far less so, the list is now worthless.

Looks like we found the price tag for more conservatives to kneel before Zod: nothing more than a meaningless list of proposed Supreme Court judges.

And from a man who has almost never kept his word in life for 70 years. Including millions of dollars he supposedly raised for veterans in Iowa those veterans still haven’t seen.

My, what a cheap date we are — again. Trump’s Escorts I’m sure were more expensive.

This list was published at this time for one reason — to offer a fig leaf to conservative holdouts, especially Cruz supporters, that gives them permission to bow the knee to Trump’s chocolate bunny. You now have plausible deniability to sellout. You can say later when he sells you out “I’m disappointed he didn’t keep his word, but that’s on him.”

If any of those 11 names becomes a Supreme Court Justice in the next 4 years I’ll get a tattoo of their name.

Every single thing Donald Trump says, everything, comes with an expiration date. Usually that expiration date comes in the next clause of the same sentence. Sometimes it comes at the end of the day.

We’re right back to Square One. There is no reason for conservatives to come aboard with Trump when its obvious even amid sycophantic questioning by Sean Hannity he refuses to stand with conservatives.