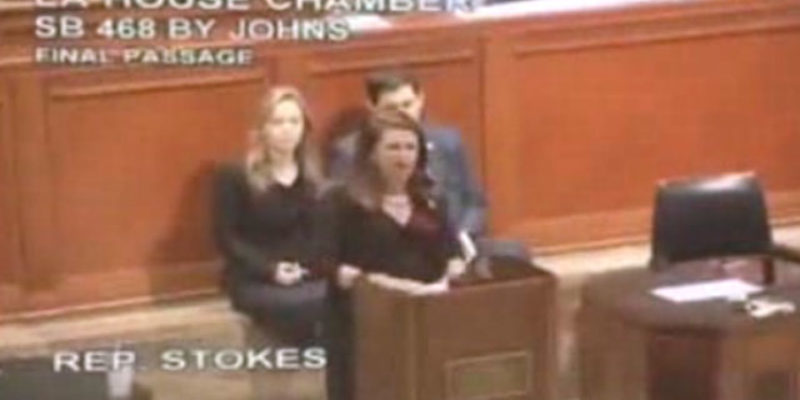 …since it’s apparently a thing.

Stokes went ballistic in response to Kenny Havard’s amendment on the stripper bill (we covered that last night here), and essentially dressed down the entire House of Representatives as a bunch of male chauvinist pigs because there was snickering, and because some of the jokesters in the legislature had the supposed poor taste to leave dollar bills on the podium during debate on the bill in question, which would have made it illegal for people under 21 to work as strippers in Louisiana. She got even more huffy about this than she’s been over resistance to her various attempts to raise taxes this year.

The thing about this which ought to be remembered is that the bill is a stupid bill, it’s a waste of the legislature’s time, it’s patently unconstitutional to deny a 20-year old stripper the right to work in a legal trade and there is no nexus between the bill and the “human trafficking” it purports to put a stop to.

And the House should have voted the bill down for all those reasons rather than simply having fun with it.

Kenny Havard deserves criticism, but not for what you think. What he deserves criticism for was for pulling his amendment, that he said was a joke, which would restrict the eligibility to work as a stripper to people between the ages of 21 and 28 and weighing less than 160 pounds.

Havard chickened out of a fight that was worth having. He voiced concerns about overregulation, and those concerns were correct, but when Rep. Nancy Landry asked him “Don’t you think this amendment is offensive?” he pulled it.

What he should have said was “This entire bill, this entire debate, is offensive. Either stripping is a legal profession or it’s not. You people want to make it illegal, then fine – at least bring that bill and we’ll have an honest debate about the subject. But if you want to pass this nanny-state garbage of a bill then you’re going to explain to me why my absurd amendment that some of the losers sitting in strip bars across the state would probably say is a GREAT idea is offensive, while your idea that a 20-year old who is currently dancing in a strip club because it’s a legal way for her to make a living and will be denied that job, is not.”

And then he could say “I’m not here to make friends and I’m not here to win a popularity contest. I am here to legislate responsibly, and that does NOT include making arbitrary, nonsense rules about how people may live their lives. And if that offends your sensibilities then I’m sorry – but I didn’t bring this stupid bill. Somebody else did. You want to have fewer hurt feelings, fine. Let’s have a better commitment not to clutter this place up with a bunch of legislation that makes people feel better but wastes our time.”

Havard blew that, and now there is a Facebook page demanding his resignation and social media has blown up with what a jerk he is. So he gets all of the nastiness and opprobrium and none of the credit for trying to stand athwart legislative idiocy and yelling “Stop!” because he didn’t yell “Stop!” He pulled his amendment and voted for the bill.

Maybe Havard’s reception at home was a little better than if he’d stood and fought. Maybe that’s his takeaway.

I said on Facebook last night that I will happily raise money for a legal defense fund should a 20-year old stripper who loses her job over this bill be willing to sue the state for violating her constitutional right to earn a living. And I mean it. If we get a plaintiff for this, I will do what I can to get her a lawyer.

I might even ask Julie Stokes to pony up a few bucks. It’s the least she can do for a fellow working girl getting screwed over by the Louisiana Legislature.

Interested in more news from Louisiana? We've got you covered! See More Louisiana News
Previous Article I Love Trump’s Supreme Court List, And I Wish I Could Give It Credit…
Next Article The Low Popahirum, May 19, 2016