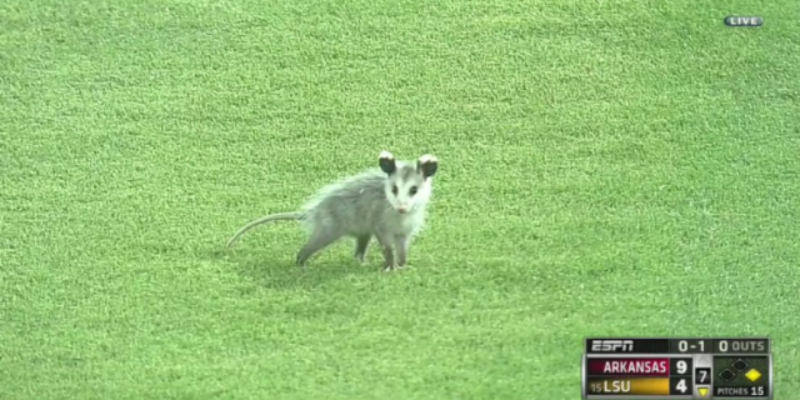 In case you’re not aware, LSU beat Arkansas 10-9 in 10 innings last night. If that doesn’t sound overly impressive, given that Arkansas is now 7-16 in the SEC, you might consider that in the bottom of the 5th inning LSU was getting pounded 9-1.

They scored nine unanswered runs to win the game. Which is a pretty good comeback.

It was a crazy game. It had three major unexpected heroes.

One was Brennan Breaux, a little-used reserve outfielder who going into the game was just 1-for-20 at the plate for the season and came in as a left-fielder after Beau Jordan had been yanked for making a relay throw to the wrong base in the first inning and then popping off to coach Paul Mainieri after the latter griped to him about it and his replacement Brody Wofford dropped an easy pop fly in a disastrous fifth inning after striking out with the bases loaded in his first at-bat in the bottom of the first. Breaux came in and promptly went 3-for-3 with a crucial two-run double in the ninth inning.

Another was Kramer Robertson, who was 3-for-7 on the night including the game-winning hit in the 10th inning. Interestingly enough, Robertson was having a terrible game until the fourth inning; what turned it around for him was a relay throw from center field that he lost in the lights and promptly took square in the mouth – his upper lip in no time swelled up into a duck bill and he proceeded to wear out Arkansas pitching the rest of the evening.

But the real hero? This guy, whose appearance with LSU down 9-4 was nothing short of magical.

Hopefully that little possum has found a home at Alex Box Stadium. He needs a good, solid Louisiana name like Pierre or Trosclair or Gris-Gris, he needs a swanky LSU dog sweater and he needs to get fattened up by the equipment managers and led around the park on a leash before the games. He’s earned himself the swell life of a mascot; he might actually have saved the season for LSU.

Interested in more national news? We've got you covered! See More National News
Previous Article The Odds Of An Independent Conservative Third-Party Candidacy Seem To Be Growing
Next Article You Still Don’t Believe Trump Is Trying To Purge Conservatives From The GOP?