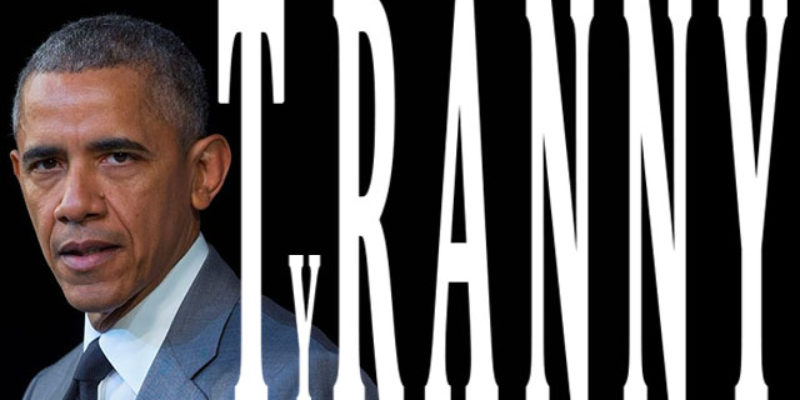 Mississippi state senator Chris McDaniel, who in 2014 was the victim of an atrociously-corrupt incumbent campaign by Thad Cochran which denied him the GOP nomination he would have won over the latter but for the importation of thousands of Democrats through an NRSC-funded get-out-the-vote campaign, had the best response to the Obama administration’s demand today that all 98,000 public schools in America open their bathrooms to transvestites and others of exotic gender choices whose presence in, say, a girls’ bathroom would be considered as inappropriate by normal society…

I’m sure a few of our DC Congressmen will condemn President Obama’s new bathroom order, but the president isn’t the only one to blame.

For years, our GOP congressmen have failed to push back against the president’s radical agenda. It takes more than a press release and a handshake to stop a leftist.

Well, Obama’a new bathroom dictate underscores just how significantly our congressmen have failed us, because each one of them have been guilty of incurring irresponsible debt, making Mississippi more addicted to federal spending, while undermining the state’s sovereignty.

Didn’t they know this day would come? Did they truly care?

There is no such thing as a free meal. Each time your Congressmen rush to Washington in order to beg for federal money, they are undermining the sovereignty of Mississippi and eroding the constitutional protections developed by the founders.
And each time you’re elected congressmen fail to hold the line on spending, the problem worsens.

As a state becomes more addicted it becomes more beholden. As it grows more dependent, its borders become more irrelevant. Without the ability to operate independently, states become little more than an appendage of the central authority.

That is another reason debt is so dangerous. Not only does it undermine the economic security of a nation, it undermines a state’s ability to serve as a bulwark against unconstitutional federal actions.

The federal government has absolutely no authority to dictate transgender bathroom policies to the State of Mississippi or any other state.

But now Obama says he will cut off federal funding if we don’t obey.

He and Congress built this financial prison together — one Thad Cochran center at a time.

As for me, my family and I will not comply with Obama’s order, and I ask Mississippians to join me.

The people of a state like Mississippi have no interest in complying with a mandate like the one the Obama administration is attempting to hand down, and will rightly regard such as tyrannical. It is also correct, and perhaps more to the point, that the president has no authority to cut off a state’s education funding on so exotic a theory without the cooperation of Congress.

The tranny-in-the-bathroom mandate is a challenge to the Republican Congress, and it’s an intensely political one. Obama is looking for either a too-muted reaction, which would dispirit Republican voters this fall, or an over-the-top reaction which would make Republicans look foolish.

The smart play, obviously, is to ridicule the president and to foist tranny-in-the-bathroom on him as the perfect illustration of what kind of insane, unserious and bizarre failure of a presidency he has run. And then to begin openly and quickly debating a complete sea change in the federal government’s role in public education.

Congress ought to begin debate next week on a bill de-funding the Department of Education and either block-granting all of its money to the states or to establish a federal refundable tax credit for education expenses. It’s time to take the school choice movement national, and call it an emergency since we have a president, and another on the way, who’s intent on inserting perverts and crazies into girls’ bathrooms around the country.

Because that’s what you have with Obama and Hillary. They represent an all-out effort by the Insane Left to turn your kids’ education into an indoctrination. And you elected a Republican House and Senate to serve as a check on that kind of abusive behavior by a Democrat president.

So that Republican House and Senate, which presumably would like to be re-elected, ought to show that not only are they willing to act to stop Obama in his tracks on the tranny-in-the-bathroom mandate, but they’re willing to tear down the governmental structure which allows an unhinged, bizarre cretin like Obama to usurp the power to do what he’s doing.

If the whole country worked on school vouchers, Obama wouldn’t have any mechanism to promote transvestites in girls’ locker rooms, would he? If federal education dollars were taken out of his hands and simply block-granted to the states, he wouldn’t have the power to dictate their behavior, would he?

These are options Congress already should have been insisting on. They’re better policy than federal control over education – which has brought nothing but ruin to American public education anyway; this country led the planet in K-12 educational performance before Jimmy Carter created the Department of Education and we’re now close to the bottom of the developed world. Now that Obama has tipped his hand in an effort to demoralize normal Americans, a smart opposition would take advantage to push an agenda that would do lasting damage to Obama’s party.

You push national school choice now, and those opposed are for trannies in the girls’ locker room – because it’s clear that’s what the nuts in charge of government education want. Is that a completely accurate picture? Perhaps not, but we can generally agree it’s substantively correct. No one is satisfied with what has become of public schools thanks to federal mandates, whether it’s trannies in the bathroom, Michelle Obama’s idiotic school lunches, the removal of civics and moral instruction in the schools, Common Core or any number of other crazy initiatives.

And because we’ve allowed federal money to pay for it, we’ve allowed the president to control it. As this country doesn’t seem capable of choosing a president with good judgement on this issue, it’s time to take away his power to dictate policy.

And if Republicans in Congress do little more than rail against today’s insanity, Republican voters will rightly express their lack of faith in the party’s leadership in November.