From the New York Times link Cheri Jacobus was referencing…

For some in the party, the question of whether to embrace Mr. Trump is not merely an intellectual exercise. Some staff members at the Republican National Committee were told Wednesday that if they were unable to get behind the nominee, they should leave by the end of the week.

Today is the end of the week, so obviously if there are reports of turnover among the RNC staff that would be an indication the reports were true in spit of Spicer’s denial.

Caleb Howe at RedState said he had information that would contradict Spicer’s statements, and noted the denials also fly in the face of common sense…

But we spoke with former staff members today who find the original story plausible and who were, frankly, mystified as to why the RNC would deny it.

One former RNC staff member tells RedState that they “can totally imagine a meeting where they say, Trump is the nominee, we work for him now, if anyone has a problem with that, they shouldn’t be here anymore.” The forer staffer explains that when you work for the RNC, you have a job to do promoting GOP candidates, and that people have to be prepared to do that. “It sounds like a juicy story,” they add, “but it just makes sense.”

Another former member RNC employee agrees. “The reason it exists is to fund and elect republican nominees. It’s their sole purpose.” But this person added a caveat.

“It was never really an issue before, but in this case it makes sense. The problem comes when your republican nominee is actually a democrat. You might have to have a conversation. It’s one thing if someone has a problem with, like, Romneycare. But it’s another thing when the nominee disagrees with every single major Republican platform. You’re asking people who went to work to elect Republicans to start working every day to elect a man who is, on paper, a Democrat.”

It’s a good point. Anyone who is on a mailing list from either political party knows that the communications staff in particular has to put their name on Trump. Literally. Emails come through in their name. Now they have to be prepared to send an email that might say “tax the rich” or “raise the minimum wage” or “hooray for Planned Parenthood.” Of course there are people who don’t want to do that.

Howe is correct, of course – the RNC exists, particularly in presidential years, to elect the Republican nominee for president. It does the RNC zero good to have employees not on board with that mission, and any organization with employees who do not share its mission is an organization which needs new employees.

This just happens to be the first time anyone can recall in which people who represent at least a plurality of the party (or at least that was the assumption before this week), namely ideological conservatives, wouldn’t at least be able to make peace with the nominee.

But that’s where we are with Trump, because since he became the presumptive nominee on Tuesday he’s been fairly active in signaling an intention to drum ideological conservatives out of the party.

All of those things constitute direct messages to conservatives that Trump does not see us as part of his coalition. And as the presidential nominee is the de facto head of the party, that’s a signal that the party is no longer a home for conservatives. Either put your ideology on ice and help Trump pursue power for its own sake, with all the trappings of it trickling down to you as the spoils of victory should it come, or grab a walking stick and a blanket and embark into the wilderness.

Which is a message being delivered for Trump by none other than Mike Huckabee, whose loathsome opportunism serves as an even more attractive invitation for conservatives to leave the party.

We’re only three days into this new Era of Trump, but it’s relatively clear this is the direction he’s moving in. By the time the convention rolls around the effort to marginalize conservatives will be on full display when Trump is presented with a platform the party’s overwhelmingly conservative delegates will have written – will he reject that platform, or ignore it? Or will he demand the platform reflect his current statements, like for example the one he made in West Virginia yesterday…

“I’m a conservative, but the conservatives hate me for suggesting I would dare tax somebody,” Trump said after vowing that companies moving jobs overseas would face stiff tariffs when they try to ship their products back to the United States.

Trump or no Trump, there is little evidence the majority of the delegates to the GOP convention are going to want to put a protectionist trade agenda in the party’s platform – and he’s unlikely to abide by what that majority presents. That’s just one of many issues where Trump won’t reflect the majority of the convention; by the time the proceedings are finished in Cleveland we’ll know just how far from their principles Trump will force conservatives to stray in order to support him.

– Which brings us to yesterday’s fight with Paul Ryan. The House Speaker told CNN’s Jake Tapper yesterday that he’s “not quite there yet” where it comes to supporting Trump.

That occasioned a lot of blowback. Ben Carson lectured Ryan that “you don’t have another choice.” And in typical Trump style, he fanned the flames of the controversy by putting out this statement…

“I am not ready to support Speaker Ryan’s agenda. Perhaps in the future we can work together and come to an agreement about what is best for the American people. They have been treated so badly for so long that it is about time for politicians to put them first!”

Paul Ryan said that I inherited something very special, the Republican Party. Wrong, I didn't inherit it, I won it with millions of voters!

What the Trump fans are doing to Ryan on Twitter is exactly the same as what they did to Ted Cruz. Just trust us on that; you really don’t want to see all the vile examples we could show you.

Trump then did his morning phoner on Fox and Friends, which is the scene for most of his most explosive material these days, and continued the grousing…

Ryan’s refusal is “not a good thing” and “something the party should get solved quickly,” Trump said Friday on Fox & Friends, adding that he was surprised by the speaker’s comments.

“I mean, he talks about unity, but what is this about unity?” Trump said. “With millions of people coming into the party, obviously I’m saying the right thing.”

Trump and Ryan are supposed to meet on Wednesday. We all know what the public result of that meeting will be. We can surmise that in private it’s going to be a diktat to Ryan – come aboard or else.

This isn’t just about Ryan’s personal scruples, of course. He’s going to be trying to hold the House majority against what might be a bit of a headwind given the weakness of the nominee in the polls. It’s difficult to find enough flippable seats for the Democrats to take a House majority, but not impossible if things go badly enough – and if Ryan gets in bed with Trump and the latter runs a campaign hard to the left in the fall, the results for Republicans in House races could be disastrous. Ryan needs to create, and maintain if he can, some distance with Trump in order to save some of those seats.

Ross Douthat put it well in a couple of tweets yesterday…

Here's the problem: Trump will pivot, he already is — but the pivot will take him *further* away from Ryan on economics.

Source familiar w @SpeakerRyan thinking tells me had he endorsed, every house Repub would have it hanging around their necks.

Ryan can’t serve his own purposes by making an early endorsement of Trump, because to do so gives him a green light to run as a more interesting version of Hillary Clinton – which is a cute strategy for Trump and an absolute disaster for Ryan and his people. As Hot Air’s Allahpundit asked, if that endorsement is an albatross why would Ryan ever give it?

One thing is true – no party has ever been so ideologically distant from its nominee. That’s never happened before in American politics. And this isn’t going to work.

– For more on all this, and to get a real 30,000-foot view of what’s about to happen, Jonathan Last’s piece at The Weekly Standard is a must-read; namely, that the John Boehners and Mitch McConnells, who he calls the Establishment Republican Elites, or ERE’s, that Trump’s voters are supporting him in an effort to get rid of will actually prosper amid a Trump presidency; they don’t believe in anything, so they’ll be happy to go from flaccidly pushing the U.S. Chamber of Commerce’s agenda to flaccidly pushing Trump’s tariffs-and-a-wall agenda. They don’t mind being co-opted in the least.

The people who will be liquidated in a Trump GOP, though, will be the conservative thinkers within the party – a whole class of people (Last calls them Establishment Conservative Elites, or ECE’s) who have been railing against the lack of vision on the part of the Boehners and McConnells. They’re not on board with tariffs-and-a-wall, but they’ve spent the past seven years trying to come up with agenda items that would make the party a friend of the working class again. Their efforts won’t see much of a reward; you don’t want to be the guy with different ideas than The Boss to fulfill The Boss’ goals. That shows up The Boss.

As Last says, we have a lesson from history on this…

Well, if this all sounds vaguely familiar, it’s because it’s more or less the story of post-Bolshevik Russia. Reagan was-this is the most malapropistic analogy you’ll ever read-the Lenin of American conservatism. And with Reaganism now dead, you have two movements fighting to take over the party mantle. The intellectual conservatives-the ECE’s-are Trotsky. They still believe in conservatism itself and believe it can be adapted to the current age.

But then there’s Trump, who is Stalin. Which is to say that he is a man who cares not a whit about the ideology, or the party, but merely sees these things as vehicles to power.

As for the ERE’s, they’re the rank and file nomenklatura, the people who knew how to get by no matter who was in power.

– For Today’s Last Thing, we bring you the Canal Street Sinkhole, as only the TigerDroppings Fark Board can deliver… 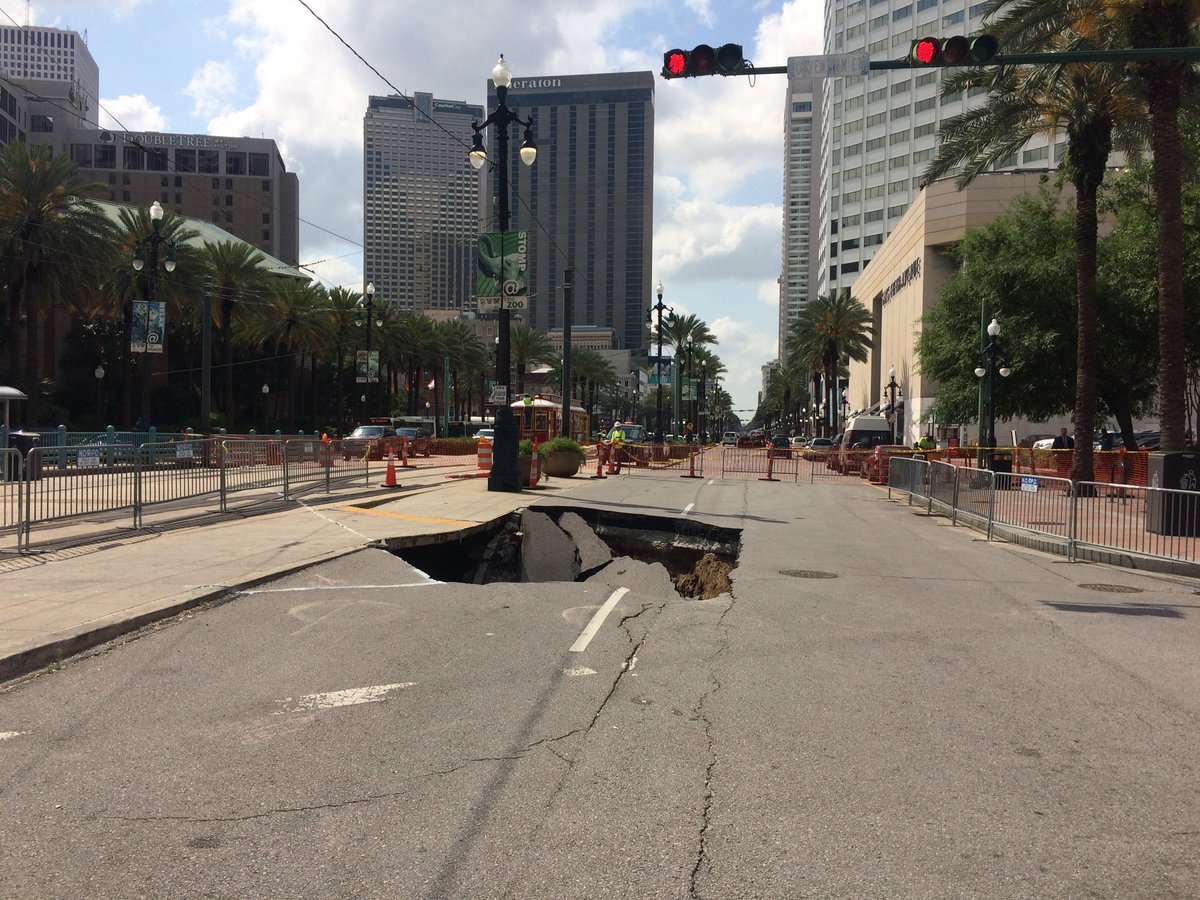 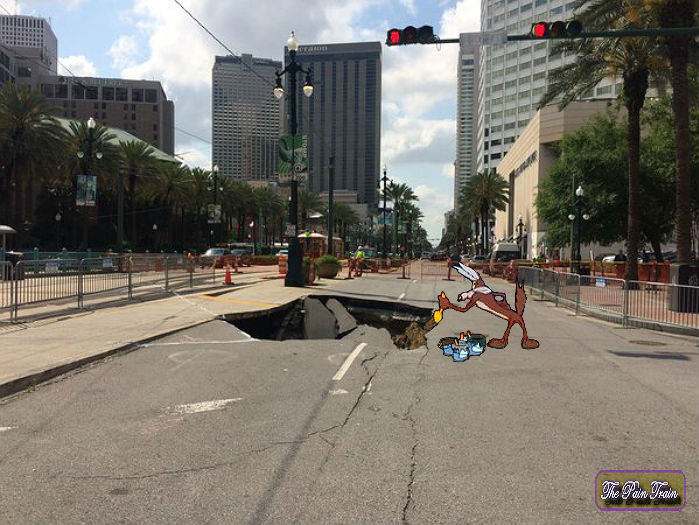