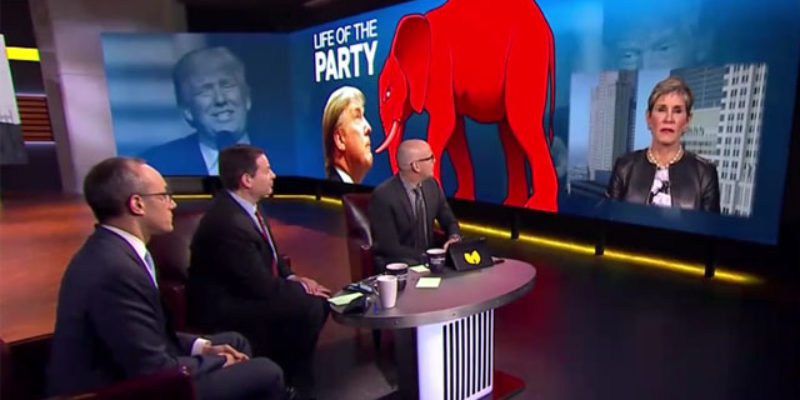 The big news here, of course, is Matalin’s flip from Republican to Libertarian, which she says she did “today” – meaning Thursday. But it’s a rather soft statement on her part – she says she’s a “Never Hillary” gal but won’t commit to being a “Never Trumper” and even at one point calls herself a Trumpster.

So why did she switch parties as soon as Trump won the nomination if it’s not out of opposition to Trump? She says because she’s about liberty and she sees the LP as the best representative of that. Which would make lots of sense if she connected it to Trump’s nomination, but she won’t.

Which gives rise to the suspicion that this might be more about opportunism and her professional future than ideology, perhaps. After all, the LP is badly in need of some good political consultants, and in three weeks they’re going to have a nominee. It’s possible that Matalin could be putting herself in a position to be on that team and play a role, and if it doesn’t happen she at least is trying not to burn any bridges.

It would have made a bigger splash to have thrown some bombs and say Trump isn’t supportable rather than the “I don’t know anything about him” line she takes. Anyway, the video is interesting nonetheless.

Interested in more national news? We've got you covered! See More National News
Previous Article THE BATTLEFIELD, May 6, 2016 – The Trump Purge Has Begun
Next Article Donald Trump Has A Brilliant Idea For National Debt…….Bankruptcy