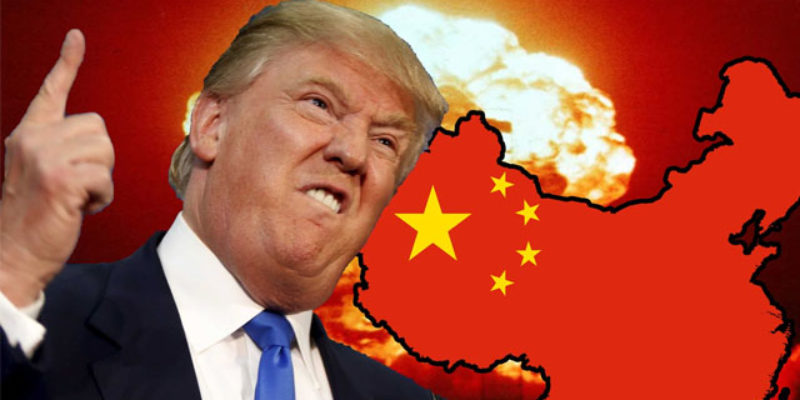 …but either way his promised trade war with the Chinese is probably a badly counterproductive idea.

Most of our readers know the score with the Chinese. American companies wanting to break into the Chinese market are forced to make something of a devil’s bargain with the corrupt, totalitarian government in that country if they want to sell or manufacture in China – principally, they have to turn over their technology, which then shortly finds its way into the hands of Chinese companies owned by elements of that government (like the Communist Party, or the People’s Liberation Army), and then in short order the government tilts the playing field in favor of the domestic players and against the foreign companies.

And at the end of the day, the Americans playing in China come out like abused spouses who lost in the divorce. They’re starting to pull out of the Chinese market.

Proprietary technology is the most valuable asset owned by many multinationals. So China truly offered a lose-lose choice for these companies — either they could miss out on the Chinese market in the short term, or give away technologies that would allow Chinese competitors to challenge them all over the world in the medium term. Of course, given China’s high rate of industrial espionage, the penalty for operating in China was even higher than official government policy would suggest.

Multinational companies often think very short term, so perhaps it isn’t surprising that many chose to make the devil’s bargain. Now the bill is coming due, as China’s government promotes its own national champions, many of which are now equipped with pirated foreign technology.

Meanwhile, multinationals’ China operations have become less and less profitable as domestic competition has intensified. The Chinese government, of course, has aided this process by systematically discriminating against foreign companies, enforcing laws and regulations with regard to multinationals while looking the other way when a domestic company commits a violation.

There are signs that some multinationals have had enough. Many are closing offices and factories in China, as costs rise and the government shuts foreigners out of the domestic market. Some recent examples include Microsoft, Adobe, Panasonic, Yahoo and Adidas.

Between this and the effects of China’s general economic slowdown, foreign direct investment into the country — while volatile — has declined in the past few years.

What does this mean in practical terms as it relates to Trump’s complaint about how the Chinese are stealing our jobs and screwing us on trade?

Well, there will be less American jobs going to China when less American companies are doing business there, and we don’t even need Trump’s 45 percent tariff to make that happen. When Apple, which is getting out of China after years of being abused by the Chinese – as the piece notes, the Chinese don’t even allow Apple to trademark the iPhone name, and so Chinese companies are selling iPhone knockoffs all over that country – moves its manufacturing operations elsewhere, China is no longer our problem.

It’s likely, of course, that the jobs moving out of China when these companies get fed up with being abused won’t actually come back to America. The fact is that if high labor costs here drove those manufacturing jobs to China in the first place the other costs imposed by a bad Chinese government won’t necessarily bring them back. Instead, Apple might be making iPhones in India, or the Philippines, or in Thailand, or in Malaysia. Or Mexico or Panama. The kinds of rote labor jobs that moved to China in the first place aren’t really what we’d regard as the backbone of a 21st century economy; we don’t spend six figures putting kids through college with the expectation they’re going to be making shoestrings or assembling computer mice.

But if those jobs go to countries which don’t have predatory governments like China does, the infusion of capital into their economies the low-end manufacturing an Adidas or Panasonic can bring might very well create consumers of American products and make their markets open and attractive places for American companies to sell in. In other words, actual free trade – the kind we’ve been pushing for decades, which has made the world a vastly richer place than it was in the 1980’s.

The problem is, Trump doesn’t just rip China. If he did, he’d have a point based on the abuse outlined above. Trump rips all our other trade partners as well.

And that’s a problem because for a long time, the primary source of America’s trade imbalance with the rest of the world has been all the foreign oil we buy. Well, that’s less of a problem now, both because we produce a lot more oil than we used to and because the price of oil is lower (though that’s changing; oil has risen some 70 percent in the last three months and at this rate soon won’t be seen as a depressed commodity). When he goes off on Vietnam as the latest country to be ripping us off it’s a signal that any country which is the recipient of manufacturing jobs the Chinese are chasing away will then become a target of Trumponomics.

That isn’t particularly productive. Some manufacturing jobs which are low-wage and low-skill are just not going to fit with our economy, where welfare will pay more than the jobs will. People aren’t going to do those jobs, unless they’re illegals. We already know what Trump says about them.

The point being that the Chinese are becoming less of a problem in terms of their stealing American jobs, capital and technology, because they’re busy killing the golden goose. While Trump is correct in decrying some of their business practices, it turns out the market will do more to punish China than his trade war could.

What would be better is if Trump started pushing policies that would make America more competitive with the Chinese. Easy stuff. Regulatory reform that would get the EPA and OSHA and the rest of the government’s goons out of the way of our productive sector. Tax reform that would bring all that capital parked overseas back home and get American companies interested in expanding again (not to mention to reverse the disturbing trend in which there have been fewer businesses extant in America each year since Barack Obama took office). A repeal of Obamacare and a market-based replacement so that health insurance isn’t a barrier to employment in this country.

None of those problems are imposed on us by the Chinese. We impose them on ourselves. If Trump would focus on that, he’d have something.