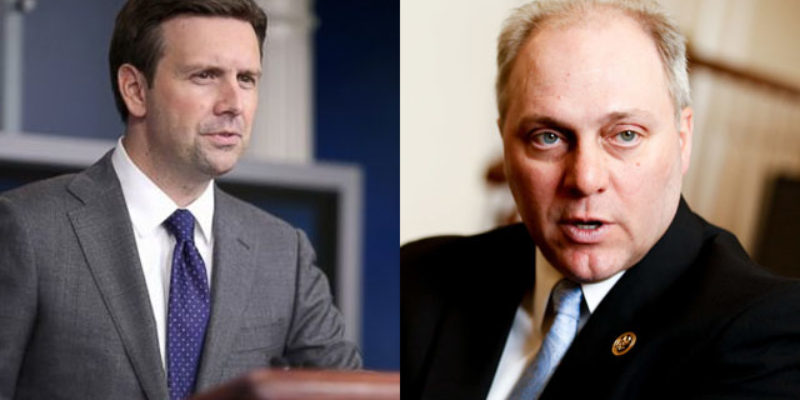 The fallout over the New York Times’ expose’ on Obama’s foreign-policy Rasputin Ben Rhodes and his braggadocious claims to have successfully purveyed a false narrative to the media in support of the Iranian nuke deal is playing out in Washington at present. Yesterday, Rhodes was summoned to appear in front of a House Oversight Committee hearing to discuss his actions in building that narrative, but the White House told committee chairman Jason Chaffetz, essentially, to bugger himself.

“We’re planning as if he is attending, and he’ll have a comfortable seat awaiting his arrival,” Chaffetz said Monday afternoon of Rhodes.

He cited what appeared to be an executive privilege-related claim, asserting that such a senior presidential adviser’s appearance “threatens the independence and autonomy of the President, as well as his ability to receive candid advice and counsel.” For those reasons, he said, “we will not make Mr. Rhodes available to testify.”

Chaffetz earlier had made a last-ditch attempt to pressure Rhodes into appearing. After White House Press Secretary Josh Earnest initially said he should invite GOP Sen. Tom Cotton, whom he accuses of spreading false information about the deal, Chaffetz did exactly that — inviting Cotton to testify, on condition that Rhodes appeared as well.

“[Earnest] suggested that you should be invited to appear at the hearing as well, because you have some ‘interesting insight’ into the JCPOA [the Iran deal]. Therefore your appearance before the Committee would be contingent on Mr. Rhodes’ appearance at that hearing,” Chaffetz said in a letter Friday.

Asked earlier Monday about the possibility of a Rhodes appearance, Earnest did not rule it out but expressed what he called “thinly veiled skepticism about the whole exercise” and reiterated his claim that it is Republicans who should answer “for saying a lot of things about the Iran deal that turned out not to be true.”

Interestingly, four days earlier Earnest had flatly stated that the refusal to make Rhodes available to Chaffetz’ committee had nothing to do with executive privilege, which could be worth considering in evaluating his statements about who’s saying things about the Iran deal that turned out not to be true.

And one of the chief targets for Earnest’s attacks against Republicans was Rep. Steve Scalise (R-La.). This from a Roll Call article last week that was, frankly, breathtaking to read…

Iranian leaders complain that they are not seeing the full financial benefits promised under the nuclear deal. Asked if the White House knew the U.S. financial system and remaining restrictions might chill potential deals, Earnest said no.

Then, he turned his sights on the Louisiana Republican.

“What is false is people like Steve Scalise said that Iran would get quote, ‘hundreds of billions of dollars.’ So again, I don’t know if Mr. Scalise is just really poorly informed or lying,” Earnest said. “But, what he predicted is not true. He said so at the time and now we can actually evaluate the facts and determine whether or not he was right. “Steve Scalise was wrong,” he added. “Not for the first time.”

But, notably, after stating clearly that the White House has concluded the No. 3 House Republican leader was “wrong,” Earnest later during his briefing brought up the notion that Scalise — and other GOP members — were not truthful about how much in a possible sanctions relief windfall Iranian leaders would get.

“And again, there was a point where … we had sort of this debate and this dispute about how much of sanctions relief they would get,” Earnest said. “People like Steve Scalise, who said that Iran would get hundreds of billions of dollars. Again, they’re either wrong or lying.”

It’s not hard to evaluate whether Scalise is wrong. If he can show that Iran has been enriched to the tune of more than $200 billion from this deal, that’s literally hundreds of billions of dollars. Which would make him the teller of truth here, and Josh Earnest…something else.

Did Iran get that $100 or $150 billion thrown around as a figure for assets the U.S. was releasing to them as a result of the deal? And did Iranian oil not make it to the world market as a function of sanctions relief? It’s not hard to see $200 billion out of those two simple things we as Americans have been told about the deal by Obama’s own people.

But Scalise is lying. So says the White House whose chief messenger on the Iran deal, who happens to be the same spin doctor who came up with the idea of selling some protest over a YouTube making fun of Mohammed as the cause of the Benghazi massacre, was actually bragging to the New York Times about how he was able to bamboozle the 27-year old reporters covering the foreign policy beat who literally knew nothing about Iran into a narrative that was patently false. Ben Rhodes sold the media an outright lie about supposed Iranian “moderates” who took charge of that country in the 2013 elections and were willing to negotiate an arms deal with the United States, when Rhodes knew damn well that (1) there are no “moderates” in charge of Iran and (2) the parameters of the deal were largely set in place in 2012, before any of these “moderates” were involved.

The entire story the administration has told about the Iran deal is poisonous bullshit, and it covers a fundamentally irresponsible piece of policy that was foisted on this country in direct contravention of our national security interest. Your kids are in more danger of being vaporized by a nuclear missile from Iran thanks to these people and their crazy sidling up to the mullahs.

By the way, in that Roll Call piece last week what set off the Earnest diatribe against the “liar” Steve Scalise was media scrutiny over some outlandish utterances from the mouth of John Kerry, the foppish buffoon serving as our Secretary of State. Specifically…

White House Press Secretary Josh Earnest on Tuesday was asked about Secretary of State John Kerry ’s assertion that businesses should not blame the U.S. financial system for the failure to strike deals with Iran. Some firms claim sanctions not addressed by the nuclear deal Tehran reached with Western powers last year still block Iran from accessing the American system or using U.S. currency for business deals.

Kerry told reporters in London before a meeting with Iranian officials and European bankers that private firms are using still-on-the-books restrictions as “an excuse.” Corporate executives, “if they don’t want to do business or they don’t see a good business deal, they shouldn’t say, ‘Oh, we can’t do it because of the United States,'” Kerry said.

Iranian leaders complain that they are not seeing the full financial benefits promised under the nuclear deal. Asked if the White House knew the U.S. financial system and remaining restrictions might chill potential deals, Earnest said no.

Do you not find it patently bizarre that John Kerry is talking about American corporations making “excuses” for not doing business with Iran?

What’s wrong with that man?

We would greatly prefer if the American Secretary of State, amid a spate of bitching by the Iranians over the reticence of corporate America to fully engage with the Iranians in the field of commerce, to take a different approach. For example, he might say that the last time a sizable cohort of Americans attempted to do business in Tehran they had their workplace invaded by fanatics, bags were thrown over their heads, and they were imprisoned and tortured for more than a year by an Iranian government which has done little to convince anyone it’s substantially different than it was then. And that Iran nuke deal or no Iran nuke deal, it wouldn’t be all that unreasonable for an American corporate executive to recognize there are considerable risks inherent in doing business with the world’s largest sponsor of jihadist terrorism.

The incident last year with the fastboat the Iranians captured in the Persian Gulf before humiliating and abusing our sailors, which the Obama administration has done its level best to cover up and minimize, probably doesn’t make American corporate executives thrilled over the prospect of investing there.

Sure, let’s open up a Crate & Barrel or Macy’s in Tehran. There’s no chance a mob stirred up by a government hack won’t come and break the place up and do Allah-knows-what to any infidels who might happen to work there.

And rather than talking about “excuses” and confusion that might arise over what activity is sanctioned and what is not, he ought to say the federal government can’t force any American companies to do business with the Iranians, the federal government damn sure isn’t about to try anything so stupid and if the Iranians can’t attract investment from corporate America it’s their own damn fault and not that of the corporations, and if they want that investment they could maybe look into doing a few things differently. Like not backing Assad in Syria, or Hamas, or Hezbollah, for example. Like ceasing their meddling in Iraq and Afghanistan. Like not sheltering any Al Qaeda or Taliban bigwigs. Like giving up the bombers of the Jewish center in Buenos Aires or the Khobar Towers.

And maybe putting a cork in all the “Death To America” nonsense they make an official motto of.

All of these things could well be useful in building confidence among the corporate world that trade with Iran isn’t a disastrously stupid idea destined to end in a flood of red ink.

But of course this White House hates the country it governs with such a fervent passion that none of these things will be said. Instead, we’ll have the really harsh invective restricted for use against the real enemies of the Obama administration – people like Steve Scalise and Jason Chaffetz.