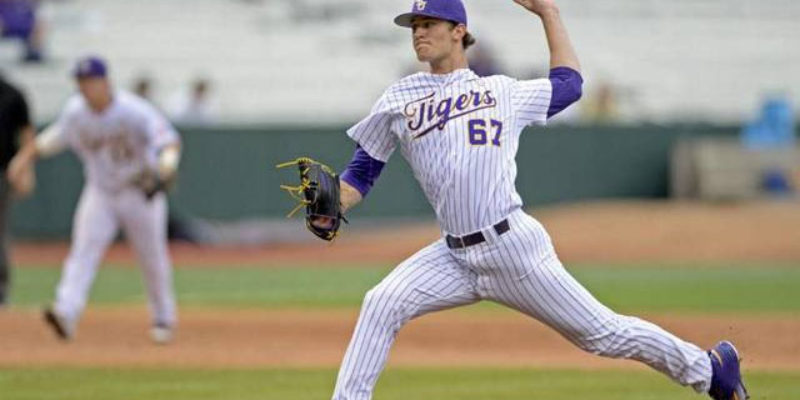 Before we get started, there’s a reason why this is the subject matter of my posting tonight – which is that I find everything about the presidential race too discouraging to analyze, and I’ve said everything I can say about John Bel Edwards’ coming attempt to raise taxes in a special session. Those are the two biggest topics in state and national politics right now, and I need an escape from them.

So, since it’s the right time of the year and it happens to be a lot more fun, I’m on LSU Baseball tonight. Sue me if you can’t handle that.

In any event, Paul Mainieri announced earlier today that he’s starting Jake Latz, his oft-injured but super-promising redshirt freshman lefty fireballer, against Tennessee. This decision seems to be generating a good bit of discussion, and because it did I can up with four observations that explain why he’s doing what he’s doing and why it makes sense.

1. Mainieri likes Latz that much – You have to understand that when Jake Latz was recruited, it was part of a beyond-imagination crop of pitchers that included Alex Lange, Mac Marshall and Jake Godfrey two years ago, and at the time there were a large number of scouts who figured a national championship with that crew was a sure thing.

And of the four, Latz was – arguably – the best of the bunch.

It should be recognized that Marshall left LSU before fall practice of his freshman year was even through, and Godfrey left after a freshman season last year which was enough to drive Mormons to drink – so much potential in his game but so little command as to make him nearly unwatchable. Obviously Lange emerged immediately as a superstar.

But Mainieri thinks Latz is on a similar level as Lange, at least potentially. And therefore, if the coach thinks Latz is healthy enough to pitch he’s going to get him in there. That’s why he got him on the mound in Saturday’s 6-2 loss to Florida, and Latz showed well with three strikeouts in an inning of work wrapped around a walk where he was robbed on a couple of pitches by the umpire and a weird infield double.

Latz is clearly coming on, even though he’s worked all of three appearances all season. Mainieri wants to make up for lost time if he can. And to see Latz’ stuff you can’t blame him. He can gun it 92-93 MPH from the left hand side with a lot of life, and he showed off an absolutely wicked bender for an out pitch against the Gators that they simple could not handle. If he can sustain that kind of work, he’s an ace-quality pitcher and he might even turn into this year’s version of Trey Hodges.

2. LSU doesn’t need the Tennessee game, but it does need to win the tournament – That might sound like nonsense, but it isn’t.

LSU sits, according to D1Baseball.com, at No. 9 in the RPI, which is sixth among the SEC schools in the rankings (Mississippi State, who won the league in the regular season, is No. 11). Two things appear fairly certain. One is that with seven SEC teams in the top 11 in the RPI rankings, and LSU actually has the worst overall record in the conference at 39-17, you’re very likely to have seven of the 16 regional hosts coming from the league. And LSU is going to be one of those seven no matter what happens in the Tennessee game. If starting Latz ends in disaster and you lose that game, you’re still 11-2 in your last 13 games and you still took a series from Florida in the last week of the regular season.

But to get to the point where they’re not just hosting a regional but gaining one of the top eight seeds is going to be ridiculously difficult. Getting seven SEC teams to host regionals is hard enough, though if you look at the rankings, the RPI and the records you come to the conclusion there’s no way anybody in that seven is going to be a 2-seed in a regional. But getting more than four of them among the top eight, that’s a heavy lift. You might have an easier time displacing one of them, though the only way that’s going to happen is winning the SEC Tournament.

And doing that, if you’re LSU, is going to mean beating Florida and Mississippi State. You’re very likely going to need Lange and Jared Poche’ if you’re going to pull that off. Starting Lange against Tennessee means not having him for either of those games. So if you want to win the tournament, you need an experiment to pay off, which means Riley Smith, Caleb Gilbert or Latz (or, to be fair, Doug Norman or Austin Bain, though neither has been looked at a lot as starters this year) giving you something in the Tennessee game – if nothing else other than to chew up a few innings and keep the bullpen from getting worn out.

3. Latz’ development is crucial for the long term – It really can’t be overstated how big a deal it is for Jake Latz to get comfortable pitching at a high level this year, and that project has been badly sidetracked by his slow recovery from arm problems last year. It was thought that getting him a start in the McNeese State game would open the door to his becoming a front line pitcher in the second half of the season, but that didn’t work out and when he had pain after that outing, there was a thought that he was through. But he finally got back on the mound against Northwestern State, and even though all he threw were fastballs in that inning of work he had some major action and velocity. Then there was the Florida performance, which gives some reason to think he’s a potential breakout pitcher here in the postseason.

Maybe that’ll work out, and maybe it won’t. But if it does, it’s a really big deal.

If you consider LSU’s pitching staff next year, it’s fairly likely Poche’ will get drafted and go pro after this year. It’s reasonably likely Hunter Newman, Parker Bugg and probably even Russell Reynolds will be drafted and leave. That doesn’t completely clean out the staff, but while Lange will still be at LSU behind him it’s a grab bag. It’s Smith and Gilbert, who show some signs of being pretty good arms, it’s Norman and Bain who have the capability of becoming key relievers if not potential starters, and it’s Jesse Stallings who probably gets another shot at regaining his old job as the team’s closer.

And every single one of the aforementioned pitchers is a right-hander. For lefties, with Valek and Hunter Devall being seniors and Poche’ probably heading off to pro baseball, you’re in a major deficit situation. You’ll have Latz, you’ll have Nick Bush, a freshman who’s redshirting this season due to arm problems, you’ll have Brennan Breaux to the extent Mainieri allows him to cross-train as a pitcher and outfielder, and you’ll have incoming freshman stud Blair Frederick from Brother Martin, who should be a pretty capable addition. That’s not a lot of lefties, and while Frederick should be pretty good it’s really a crapshoot whether LSU will find a lefty capable of being a starter or frequently-used reliever if Latz isn’t the guy who fills that role.

So if Latz’ arm is healthy now, he’s got to be brought along. The sooner the better. Mainieri thinks he can get him to be a front-line pitcher this year; he needs him to be a weekend starter or the closer next year.

4. No confidence that John Valek has enough stuff for the postseason – This is the “negative” take of the bunch, and it’s a little tough to think it given that Valek was a pretty vital cog in the weekend rotation for the first 10 weeks of the season. The problem is the more teams saw of Valek, the harder he got hit. He’s a pretty good tradesman as a pitcher, but his stuff isn’t overly nasty – he throws a 85-86 MPH fastball without a whole lot of life on it, and the breaking stuff doesn’t exactly fall off the table. He throws a lot of strikes, but collections of good hitters who get up there swinging have been having a lot of success against him.

And what Mainieri obviously has concluded is that going forward, when it only gets tougher, Valek isn’t a guy he can put on the hill for a whole lot of innings. He might be the situational lefty pitcher out of the bullpen LSU hasn’t really had all year (one would have expected Devall would have gotten that job, but Mainieri didn’t go that route), but one doesn’t get the impression the coach would put Valek in a position to have to pitch more than once through a lineup at this stage of the season.

Otherwise, you’d use Valek as your starter against Tennessee and you’d try to milk as many innings out of him as possible. After all, he’s started the last two Tuesday games for you – actually a Wednesday game against Notre Dame that was supposed to be a Tuesday game, and then the Northwestern State game. He’d be an apparent choice for Tennessee, but for the fact he’s just not getting anybody out.

So it’ll be Latz, and hopefully it’ll be Latz for more than just an inning or so. If he could go out there and lay waste to UT’s bats for four or five innings, giving Mainieri a chance to get through the game without burning up too much of the bullpen, that would be a huge win for LSU.

Assuming it is a win, of course. If LSU gets beat tomorrow, Mainieri looks like an idiot for leaving Lange and Poche’ in the dugout. But the calculation, which is likely correct, is that even if he does LSU is going to host a regional.