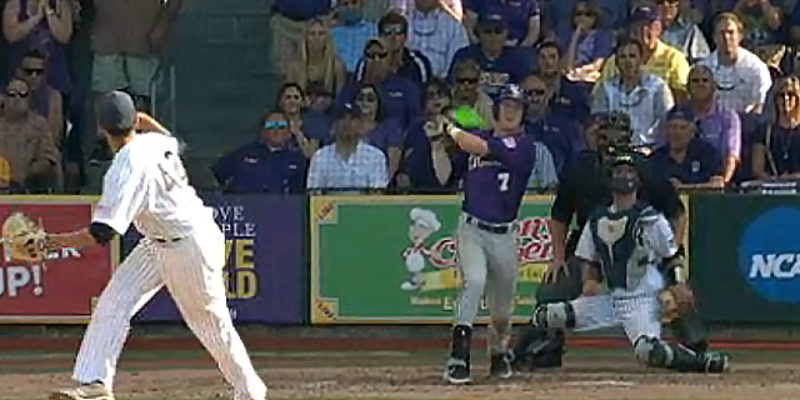 Per our post of this morning, all is now well in Paul Mainieri’s world. His Tiger baseball team came through and pulled off a colossal 5-2 victory over Rice to finish off an NCAA Regional title and send LSU on to next weekend’s Super Regional at Alex Box Stadium.

The game looked rough early, but in the sixth inning everything changed. Here was the moment – it was Greg Deichmann’s 10th home run of the season which turned a 2-1 deficit to a 3-2 lead LSU would not relinquish…

That was Blair’s first big moment calling an LSU game, and like the baseball commentators say, “he didn’t miss it.”

One thing the SEC Network missed was probably the most important aspect of the game; namely, that after that weak pitching performance in the first two innings Mainieri brought out Jared Poche for the third inning – and it was like dropping a vat of liquid nitrogen on a campfire.

Poche, who had thrown 92 pitches on Friday as LSU waylaid Utah Valley in the opening game of the regional tournament, worked from the third inning through the eighth and retired the final 16 batters he faced.

In other words, he said “Shush.” And Rice did.

For the two games of the regional, Poche worked 12 innings, gave up just six hits (only one of which came against Rice), only one run, ZERO walks and 14 strikeouts.

If there was a better pitching performance in LSU history in a regional, we haven’t seen it. He’s made himself a great deal of money in the last few days, we would guess, and that will play out either Thursday or Friday when he gets drafted.

But amid Poche’s performance is the one downside to the regional. As we discussed this morning, it’s worth second-guessing whether Poche should have been spent against Utah Valley; that effort either Friday or today would have absolutely changed last night’s game and the regional would have been over on Monday. LSU was lucky in that the rain gave Mainieri an extra day of rest for Poche and he became available – that makes the decision to start Poche in the first game rather than to use Caleb Gilbert against Utah Valley not an especially consequential one, at least in terms of the regional.

That said, two things are now evident as a result, and neither of them are great amid tonight’s celebration.

First, Poche has now worked 161 pitches in four days. He’s got to have at least six days’ rest at this point, which means you’re looking at Monday before you’d prudently put him back on the mound. Thankfully, that doesn’t kill him for the Super Regional – because LSU draws a Saturday-Sunday-Monday time frame for the Coastal Carolina series. So unless LSU loses on Saturday with Alex Lange on the hill, they can hold Poche in reserve. Things only get dicey if the Tigers lose that first game.

Related to that is the second piece to this which is, for the long term perhaps, more consequential. Which is that LSU went into this regional looking to solidify a third starter. Gilbert had that opportunity, and given the outstanding effort he gave in the SEC Tournament it was a decent bet he could deliver. He didn’t. And Jake Latz, who had been building toward a true coming-out party today, fizzled pretty badly. Couple that with a bad outing Monday night in relief from Riley Smith, who has shown some signs of stepping up as a potential third starter, and Mainieri comes out of the regional with no more reason to believe he’s got a third starter than he had going in.

Which, related to Poche’s extended use this weekend, is concerning. LSU has to win Saturday with Lange; if the Tigers don’t it’s a royal disaster and Mainieri won’t have any choice but to roll Poche out on Sunday, with only five days’ rest, in order to keep the season alive. But if they win with Lange, it buys an extra day for Poche and Mainieri can insert the third starter of his choice for Sunday’s action. Whether that would be Gilbert, Latz, Smith, or maybe John Valek who was fairly effective in the first half of the season as the Sunday starter until he found himself getting pounded by SEC hitters at midseason, is a good question that the coach unfortunately doesn’t have an answer for. It might not be a fatal problem; LSU could win with Lange on Saturday, lose with Gilbert Sunday and win with Poche Monday and still go to Omaha. But at some point not having a third starter capable of giving five or six effective innings is going to be costly.

Then again, Deichmann is absolutely on fire and Kramer Robertson and Jake Fraley look determined to drag this club to Omaha if it takes them doing it by themselves. Robertson’s single on that hit-and-run was the kind of play that makes you think of him as a pretty damn good candidate for the unofficial title of Best College Baseball Player In College Baseball. LSU has what seems to be its usual problem of a batting order limping into postseason play with a goodly number of its hitters getting cold – Beau and Bryce Jordan are both struggling, and Antoine Duplantis is in absolute free fall at this point. But with Deichmann, Fraley and Robertson carrying this team there’s an opportunity for the offense to catch fire.

Coastal Carolina is a team with gaudy individual statistics, much of which were racked up against competition that doesn’t stack up with what LSU has played. They have some premier talent, though, and a batting order with four players with 14 home runs or more. They look like an even more formidable opponent even than Rice.

For now, though, Mainieri can rest a little easy. Regardless of what happens next weekend this Tiger season, coming as it did with the need to replace eight of nine position starters from last year, is already a success just getting to a Super Regional. He’s playing with house money, and a trip to Omaha is just solid gold lagniappe.

Interested in more national news? We've got you covered! See More National News
Previous Article Meet The Democrat Donor Who Can Let House Members Ignore The Louisiana Constitution On Tax Hikes
Next Article Everything Is Possum