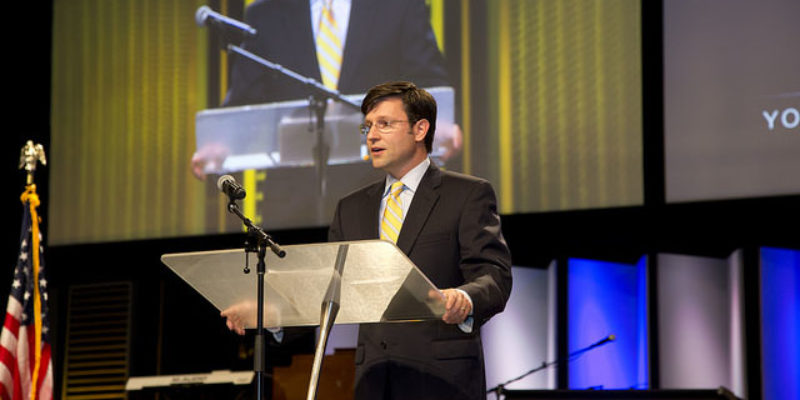 That was the understatement of the year and the reluctant admission of La. Department of Health and Hospitals Secretary Rebekah Gee after just a handful of my questions on the floor of the House of Representatives on May 12. On that day, the head of the largest division of our state government was forced to concede there are “egregious” examples of waste and inefficiency in her department’s massive $12 billion annual budget.

For example, when I asked her about the $2.6 million line item allocation for the DHH “Medicaid Fraud Detection Unit,” Dr. Gee winced and explained that it has yielded only a 0.5% return on our investment in recoveries, because DHH has “had staff out to pasture… literally barking up flagpoles, not doing relevant caseloads.” (Note that roughly $830 million per year is wasted in fraudulent Medicaid payments!) On another budget line item, the Secretary admitted that a particular DHH board spending $459,000 on the salaries of just three employees is “off mission” and really shouldn’t be in her budget at all. And yet there it remains.

Those grudging admissions came to light after less than ten minutes of my questions of Secretary Gee, concerning a mere five lines, on just one sample page, of her department’s voluminous budget. I would certainly like to have inquired about many more pages of that document before the House voted to approve it, but some of my Democrat colleagues jumped up to limit the time for further debate and, incredibly, even expressed outrage that I would have the audacity to ask such questions before the vote.

My point is not to pick on Secretary Gee (who has only been at the helm of DHH since January), but rather to illustrate an obvious truth that few at the Capitol are willing to admit: Too many of our precious taxpayer dollars are being wasted by the government.

The reason a group of us fiscal conservatives in the House have voted against the endless demands for additional taxes by the Edwards Administration is because we believe it is both foolish and immoral to squeeze more from the beleaguered families and small businesses of this state. Louisiana’s government has become a bloated, inefficient, and largely ineffective beast that must be tamed and downsized, rather than fed.

The administration and some in the media taunt those of us who have taken a principled stand against raising taxes. They claim that without that more and more revenue, hospitals, universities and disabled children will be forced to suffer irreparable losses. However, none of those doomsday scenarios would be necessary if we would first take the logical and responsible step of scaling back the insatiable bureaucracy that permeates state government.

Lest anyone believe that DHH is an anomaly, consider the findings of the Legislative Auditor’s Report in January. That document detailed hundreds of millions in outrageous and inexcusable fraud, waste, and abuse across numerous state agencies, from the Department of Education, to the Department of Environmental Quality, to particular school districts and community colleges.

And yet, when we bring legislation to address these crises and institute common sense reforms, our efforts are thwarted by petty politics. For example, my comprehensive State Government Integrity Act (HB 987) this spring was the product of countless hours of work by myself and the representatives of more than fifty business, industry and good government groups—and it would have been a game-changer. The legislation was designed to empower whistleblowers across state government to finally help us root out many millions in fraud each year. Sadly, after I got it passed through the House 85 to 1, the bill was routed to a hostile Senate committee so it would be killed.

Even the simplest reform measures are routinely opposed by the Capitol’s guardians of big government. For example, my resolution aimed at reducing the span of control of supervisors in state agencies (HCR 67) required heated debate before its passage. I drafted it in direct response to the reports in recent years that as many as 22% of our state’s managers supervise only one other employee. Such abuses would never be allowed in the private sector, but in the public sector they expect us to look the other way.

As illustrated by recent reports of state agencies moving into lavish new suites in Baton Rouge’s premier office parks, to the outrageous food stamp program abuses this spring—where the Department of Children and Family Services infamously handed out over $6 million in “disaster relief” debit cards to swarms of greedy folks who had suffered no disaster at all—a root problem with government is that it is, by its very nature, an inefficient steward of our taxpayer dollars.

Put simply, private individuals always handle their own assets better than bureaucrats ever will, because individuals risk, spend, and invest their own hard-earned money with much greater caution. Most people are more apt to waste or neglect their neighbor’s property than their own. For this reason, more good can be achieved for more of our citizens when we ensure that more money is kept in the hands of the individuals who earn it, instead of government. Only the private sector can create jobs, wealth and real opportunity for working Americans. The state does precisely the opposite—by smothering free enterprise, stifling innovation, and making larger groups of people dependent upon its programs.

Our dilemma today is that the government is clearly growing out of control. Consider that over the past decade, Louisiana’s state budget has expanded at almost twice the rate of the state’s Gross Domestic Product. Incredibly, instead of reducing spending, state leaders have continued to increase it. As a result, our budget is billions of dollars higher than it should be for a state with our population, and the 2016-17 budget is over $2 billion larger than the one approved just last year. We already ranked 18th highest in per capita expenditures in 2015, and we now have the highest sales taxes in the nation. Is it EVER enough? And what do we have to show for it?

Without a reduction in the size and breadth of this behemoth, the current situation is simply unsustainable. Average working families are being saddled with larger and larger tax burdens and a decreased standard of living, and more and more business owners and entrepreneurs are leaving us for friendlier environments in other states. When they go, so do the jobs, and opportunity, investments, local philanthropy and cultural enrichment that accompanies their success.

Until the people force their leaders to get serious about reforms to the budget and mismanaged bureaucracies, the endless cycle of taxing and spending will only get worse. Understand this: bureaucrats will always spend every single dime they can get their hands on—and then return for more. I’ve only been a legislator for 16 months, but I can tell you what I have personally observed. What we desperately need in Baton Rouge (and in Washington, D.C.) is a renewed emphasis on stewardship and accountability. If taxpayers demand it, it will happen.

As we approach the final days of the longest legislative session in Louisiana history, I believe we have a solemn duty to hold the line against the constant cry for additional taxes. In fact, I don’t think we have a choice but to hold that line, if we want to salvage what’s left of our state’s economy in this oil-based recession.

Anyone who tells you there are no additional places to cut state government—without affecting hospitals, higher ed and essential services—is either ignorant or in willful denial of the plain truth. If I were the governor right now, I would order every single department head in my cabinet to find at least an additional 3% cut in the ADMINISTRATIVE costs of their operations. If anyone told me they were unwilling to perform that task, I would replace them immediately with another executive who could. A mere 3% cut in Louisiana’s bureaucracy would cause pain to no one and would easily solve any conceivable budget shortfall (which may not even still exist after the last special session’s tax increases are realized and oil prices continue to rise).

In spite of what you often hear from Baton Rouge, the most obvious solution really isn’t complicated. As our DHH Secretary reluctantly admitted last month, “We CAN do better.” That’s exactly right.

Ronald Reagan used to say we are in a “battle against Big Government.” To win this critical battle, somewhere, at some point, we have to say enough is enough. In Louisiana, I think that time is now.