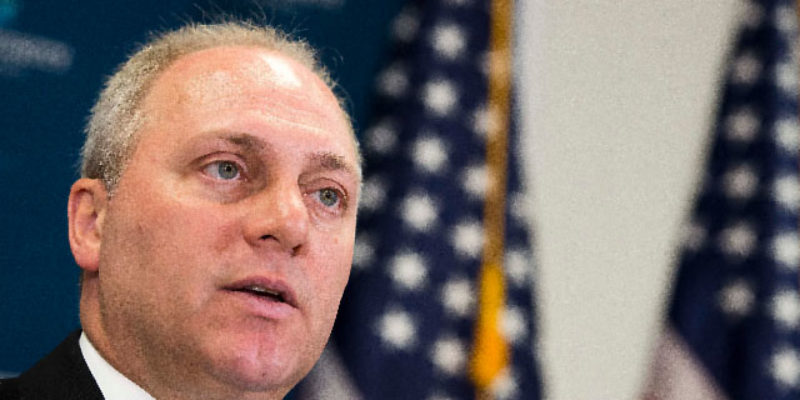 The press release, issued a few minutes ago…

“Considering the ongoing criminal investigation of Hillary Clinton, this secret meeting between the Attorney General and Bill Clinton shows an astounding lack of judgement by Loretta Lynch,” Scalise said. “Given the culture of unaccountability in the Obama Administration, it is unlikely that Attorney General Lynch will heed the growing calls for her resignation. But at a minimum, Lynch should immediately recuse herself from the Justice Department’s criminal investigation into Hillary Clinton’s unlawful activities, and appoint a special prosecutor to handle the case, so the American people can know the truth about this secret meeting and finally rest assured the criminal investigation of Hillary Clinton is being conducted fully and impartially, without even the appearance of corruption.”

This is a relatively calibrated and conservative call, as Lynch’s conduct really rates a resignation under pressure rather than a recusal. But because it stops short of that it’s difficult for Democrats to resist it (yes, yes, of course they will – but to do so is less than reasonable). After all, today you had Chris Coons and David Axelrod both coming out as critics of Lynch having had that meeting with Bill Clinton in a plane on the tarmac at the airport in Phoenix.

However, the attorney general normally doesn’t meet with family members of a target in an active FBI criminal investigation.

Hillary is just that — a target in an FBI criminal investigation.

But you’d never know that listening to Attorney General Lynch. She borrowed the narrative of the Hillary campaign when she described the FBI criminal investigation as a “security inquiry.”

Downplaying the FBI criminal investigation is a deliberate communications strategy of the Clinton campaign. It’s a very bad sign that the person who must approve any grand jury referral has adopted Hillary’s dishonest language.

Many won’t believe Lynch and Clinton only discussed grandkids and golf in her cozy jet. But I do.

That’s all they needed to discuss for Bill to interfere with a criminal prosecution. Sophisticated insiders don’t need to use clumsy and explicit language. Merely having the tarmac summit interferes with the investigation, even if golf and grandkids were the only topics discussed.

The tarmac summit sent a signal. It is a signal to all of the hardworking FBI agents who have the goods on Hillary.

We can see the trajectory here. Lynch is pressuring the FBI not to send up a recommendation to prosecute Hillary Clinton, because she won’t act on that recommendation. And if the usual pattern plays out (see the David Daleiden/Planned Parenthood video controversy, in which Daleiden’s Center for Medical Progress exposed patently illegal sales of body parts by multiple Planned Parenthood clinics and instead of investigating that conduct Lynch investigated CMP, as an example), any FBI agents who opt to act as whistleblowers or express dissent are likely to pay a huge price.

And then there is this, which presents an awfully strong case for Scalise’s demand…

If the court permits the delay, the public won’t be able to read the communications until October 2018, about 22 months into her prospective first term as President. The four senior Clinton aides involved were Deputy Assistant Secretary of State Michael Fuchs, Ambassador-At-Large Melanne Verveer, Chief of Staff Cheryl Mills, and Deputy Chief of Staff Huma Abedin.

Connect all these dots, and they create a picture which surprises few and disappoints many. Despite the strength of the evidence against Clinton – Adams surmises that a county district attorney wouldn’t have much trouble convicting on what we already know Hillary did with her e-mails – few believe the Obama DOJ will actually prosecute her, and what we’re seeing from Lynch shows that assumption is likely correct.

But what kind of country are we living in when there is no expectation that the mind-numbingly, blatantly illegal conduct in question will carry any consequences? And if Hillary Clinton can get away with trashing the laws on handling state secrets in order to mask the corruption of the Clinton Foundation, what is the moral case for Americans to follow laws they’d prefer not to?

If ever it was time and place for a special prosecutor, it’s here and now. Fulfilling Scalise’s demand is the least Lynch can do. But you are not wrong to doubt even that will be forthcoming.

Interested in more national news? We've got you covered! See More National News
Previous Article The Times-Picayune Reminds Us That We’re Better Off Just Bulldozing SUNO
Next Article Obama To Honor New Orleans For Opening City To Flood Of Immigrants And Refugees Under Federal Project