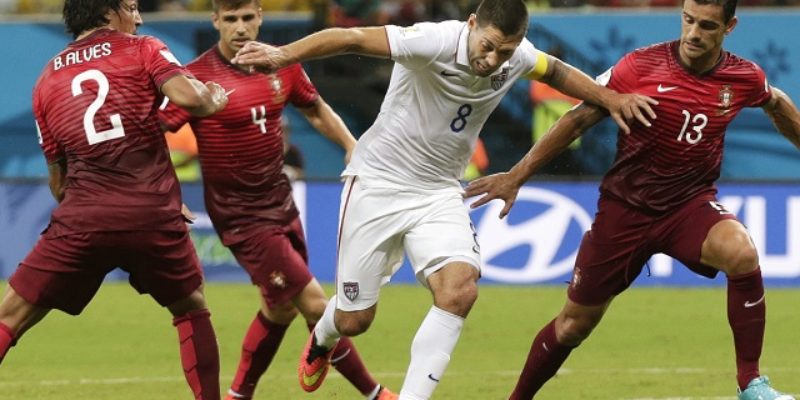 Last night, the United States men’s national soccer team lost the Copa America third place game 1-0 to Colombia. The third place finish is the U.S.’s best showing at a major tournament since finishing as the runner up in the 2009 Confederations Cup. I largely agree with ESPN’s player ratings for the match.

Here are some thoughts:

This needs to be the end for Chris Wondolowski, Graham Zusi, Kyle Beckerman, and Michael Orozco. These four guys were simply awful this tournament. All of these guys are going to be at least 30 by September. Barring lots of injuries, these four should never get called up again. These geezers, who cannot compete against the world’s best, are taking up slots younger players need to fill. Instead of these four, let’s give younger players like Jordan Morris, Fafa Picault, Paul Arriola, Sebastian Lletget, Jerome Kiesewetter, Perry Kitchen, Kellyn Acosta, Brek Shea, Eric Lichaj, and others a shot to move up the depth chart.

Michael Bradley should be benched for the September World Cup qualifiers. Michael Bradley did not have a good Copa. He doesn’t need to be called up in September. Players like Kitchen, Acosta, Wil Trapp, Danny Williams, and Alfredo Morales should get a chance to play the defensive midfielder role. When Bradley is called back up, he needs to be a defensive midfielder and nothing more.

Clint Dempsey and Jermaine Jones aren’t quite ready to exit the stage. It won’t surprise me to see either of these guys on the 2018 World Cup roster. Although both guys are on the wrong side of 30, they’re both still capable of playing high level international soccer. They’ll still have a role to play, but it’s up to Darlington Nagbe (and others) to prove they can replace Jermaine Jones and relegate him to a bench role. Clint Dempsey, who will be 35 at the next World Cup, will still be in the picture until then.

This team has a ton of potential. Many Klinsmann critics say this team has not made progress since he’s been manager. But I think this team has the potential to make a deep run at the next World Cup. The emergence of young guys like John Brooks, DeAndre Yedlin, Bobby Wood, and Gyasi Zardes in the starting XI is a good first step. This team will only get much better as these players develop and hit their prime in about 3-4 years.