Earlier in the week, I posted a blog about Baton Rouge returning to normalcy. It was about what I thought was an inflammatory protest sign at a time when we should be healing as opposed to escalating tensions. I got a ton of feedback on the post. Most of it was positive, though there were (as there always are) a few detractors. But yesterday, we were given a glimpse that the inflammatory nature of the protesting may not be waning just yet.

Arthur “Silky Slim” Reed, an activist from right here in Baton Rouge, stood on the steps of City Hall and ramped things back up again. A friend of mine was there and sent me this picture… 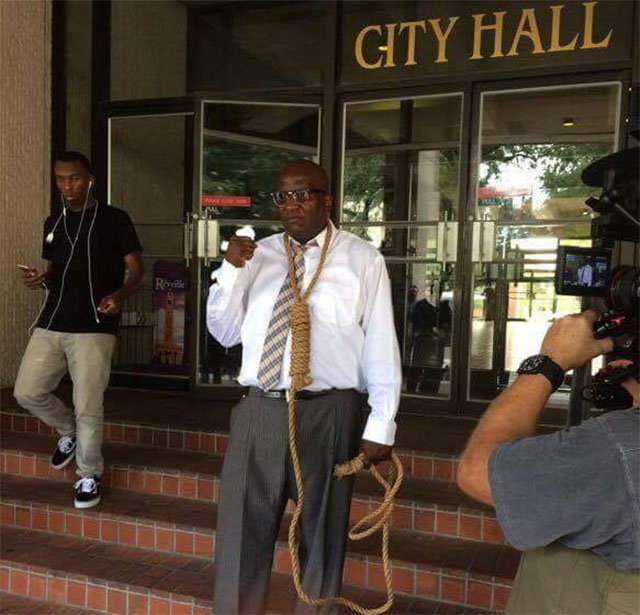 Since I wasn’t there, I can’t comment on what Mr. Reed had to say, though the topic was community policing and having BRPD officers live in Baton Rouge. But, as they say, a picture speaks a thousand words, and this picture counted out the full thousand.

I don’t want to judge or impugn Mr. Reed. In reading up on him, I have learned that he has been to hell and back in his lifetime. The story told in the bio on his website alone is one that I don’t know if I’d have the strength to rise above. But, I do have a question about his use of props.

Isn’t it illegal to display a noose on public property? I looked it up, and it turns out, Mr. Reed may have broken the law yesterday.

From the website Justia, here is the definition of our noose law:

TITLE 14 Criminal law :: RS 14:40.5
A. It shall be unlawful for any person, with the intent to intimidate any person or group of persons, to etch, paint, draw, or otherwise place or display a hangman’s noose on the property of another, a highway, or other public place.

B. As used in this Section, “noose” means a rope tied in a slip knot, which binds closer the more it is drawn, which historically has been used in execution by hanging, and which symbolizes racism and intimidation.

C. Whoever commits the crime of public display of a noose with the intent to intimidate shall be fined not more than five thousand dollars or imprisoned with or without hard labor for not more than one year, or both.

The way I read that, and I am not an attorney, he did exactly what the law says not to do. You could make the argument that his intent was not to intimidate, but according to the actual definition of the word intimidate it says: to frighten someone in order to make them do what you want.

I get the intent of the law, which was passed in the wake of the Jena 6 incident when racial tensions were through the roof, though some could argue that the law itself violates the First Amendment. But, by the letter of the law, isn’t Mr. Reed in violation of it?

For what it’s worth, this is not the first time Mr. Reed has used a noose for a prop to make his point. In October of 2014, Reed pulled a noose out of a bag at a Metro Council meeting while speaking out against a BRPD officer who retired in the wake of accusations of sending racist text messages. Here is a link to the story from The Advocate. You’ll have to scroll through the pictures to find the one of Reed.

Again, I don’t want to judge Reed’s intentions without having the full story. But, the law being what the law is, I have to wonder if he broke that law today.

If you think I’m off base on this, please comment. There is plenty of room for discussion on this one.

Interested in more news from Louisiana? We've got you covered! See More Louisiana News
Previous Article What Republican Speechwriter Did Obama Hire For Last Night’s Address?
Next Article The DA In Lafayette Just Filed A Coastal Lawsuit Against The Oil Industry